I’m getting tired of this crap!

I’ve been snow blowing this &*(#$%! driveway for the past five days and I’m ready to go off like Urlacher on a ball carrier. Whew! I feel better now, thanks for listening.

Anyway, I was looking forward to getting out of the snow for some filming of Zona’s Awesome Fishing Show down south but I called an audible and had them meet me in Central Illinois. (I like to keep my crew guessing until the last possible minute). 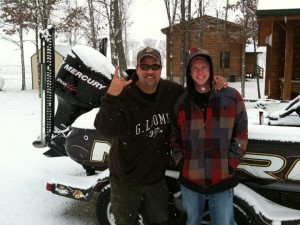 I’d been told about this power plant lake in Effingham, Ill. called Newton Lake, and I finally decided that the weather where I’d been planning to go was bad, and we needed to try Illinois. Don’t ask, I’ve already told you about my ADD.

Anyway, we met Johnny VanDam, you know the nephew of that other VanDam, and he too thought I was crazy for choosing Illinois for filming. I’ve always wanted to do a show in the snow, I thought it would look really cool on camera, and despite the rumbling concerns over my sanity amongst the “talent” and crew; I showed them. 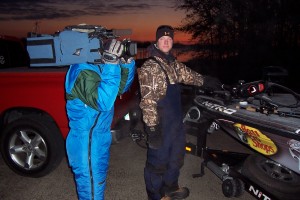 Newton is a power plant lake, and even though the air temperature was 22 degrees when we slid the Nitro in the lake, and 23 when we got off the water, we pounded them. I mean beat them like a rented mule, whipped them with… you get the picture.

The water temperature was 74, and these fish ate everything, Strike King Spittin’ King’s, Red Eye Shad’s, Tour Grade Jigs; anything and everything we threw at them. It was snowing all around us and we were busting them over the heads with topwater; it was awesome. Our best five went about 21 pounds, but we caught piles of them.

It was weird though, almost like a taping of the bass fishing Twilight Zone. The cold weather and the snow are telling me to slow down and lighten up, but the fish are crushing reaction baits and jigs; it was a little dizzying. 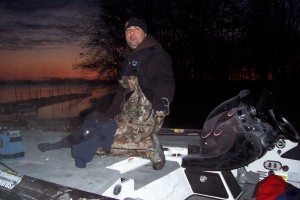 After the filming I came home and started packing up to drive to Little Rock to meet the crew from JM and Associates to go on a three week filming excursion. I never know where we’re going to go until we get there, but I think its fun.

My cameraman Wes Miller might disagree. He’s a true professional, truly the best in his business. I’m reminded of that all the time when I turn around and realize that it’s Wes behind the lens. He’s one of the hardest working guys on tour.

In fact, every time I hear one of these guys start to (translate “these guys” as “myself”) complain about their back hurting, I think of Wes and the fact that he’s been holding a 50 pound camera on his shoulder for 15 years, doing everything the pros are; it makes me think twice… I mean puts it into perspective for the anglers.

Between then and now, I’ve got appearances set up for the boat shows this weekend at the Bass Pro Shops in Gurnee, Ill. on Saturday and Portage, Ind. on Sunday. Totally looking forward to being there and meeting fans and customers, but can’t believe I have to work through a Bear’s playoff game.

I hope somebody brings me a TV.