Fred Roumbanis – Cold! Jackson the Firefighter with a Friend?

Things have been quiet around our house lately. The weather’s been cold and I can’t fish much, which is okay right now. I’ve been working out at the gym pretty hard.

We’re still on the lookout for a title sponsor for the season, we’re a little behind schedule on it, but that’s the way things go in this business. But, we’re using the time to our advantage.

The busy season is ahead of us, so we’re trying to spend as much family time together as we can. We did try to go fishing as a family the other day. We took the time to go to a heated dock on a lake near us to go fishing for crappie.

We got down there and the heaters weren’t working, so it was cold in the dock, plus it was really hard to get a 1/32-ounce through an inch of ice on top of the lake; we lasted about 10 minutes. 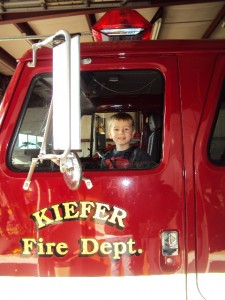 One of the really cool things we did recently was take Jackson over to the Kiefer Fire Department where a friend of mine, Kellen Davis is a Volunteer Fire Fighter there. Kellen let Jackson climb and all over their fire engine; he blew the horn and played all over that rig. He’s spent the last few days running around putting out imaginary fires all over the house; it’s really cool.

Now that I think about it, Kellen is one of the really good guys out there. I met him when I found out about his company that sells tungsten weights. He’s got a side business called Percussion Tungsten Weights, and he really works hard at everything he does.

He volunteered to play Santa all over the place at Christmas time, and even volunteers to help fix stuff around people’s houses when they need it. It was snowing the other day and we had a problem with one of our fences; he rushed over to help us fix it; he just a really good guy. 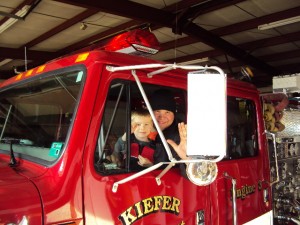 Well, I guess I’ll get back to working on tackle; I just got a box of super secret stuff from the guys at Pepper Jigs. I can’t wait to see what’s in there, they’ll make just about anything I ask them to, that’s really cool.