Mike Iaconelli plays hard. He always has. Long before he became a professional bass fishing icon, he played amateur hockey with the intensity of the Philadelphia Flyer’s famous brawler Dave Schultz. Ike’s twisted 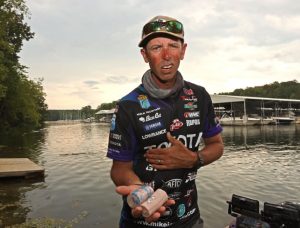 Iaconelli dove for an escaping 4-pounder on Day 1 at the Whataburger Bassmaster Elite Series at Pickwick Lake and smashed his rib cage against the fiberglass gunwale.

The Team Toyota angler will begin Day 2 with twisted ribs. In fact, he’s nearly certain at least one rib is broken. So much so, that casting a crankbait or football jig Friday seems simply impossible.

To be honest, it hurt pretty bad watching him walk back to his boat after weighing-in just three keeper bass. He was in very apparent pain, with his whole right side slumped over, as though his right shoulder was broken.

But when asked if he planned to compete on Friday, he responded in classic Iaconelli fashion. “Of course, I am. Are you kidding me? If I have to sidearm cast a Carolina Rig and drift with the current, then that’s what I’ll do,” said “Ike” with a painful grin.

In 2015, at the Elite Series event on Guntersville, he competed with a torn calf muscle that swelled like a helium party balloon, requiring emergency orthopedic surgery two days later in Huntsville to remove a small bucket of fluid — but only after he finished 12th with 72-pounds of bass.

After a very restless night, there he was at sunrise Friday backing his Tundra down the ramp. It was an absolutely admirable effort from the 49-year old.

But really, it’s nothing terribly new, it’s just the way he plays the game.

His famous “Never Give Up” mantra, that even recent Kentucky Derby winning trainer Eric Reed credited for Rich Strike’s incredibly longshot win, will be showcased to the fullest Friday at Pickwick.