Matt Arey caught an 8-pounder and a 9-pounder during the past three days of practice for the Simms Bassmaster Elite at Lake Fork.

Let’s be honest, most anglers don’t catch two bass that big in a lifetime. And crazier yet, he believes he’ll need to keep catching largemouth of that magnitude this week in order to have a chance at winning. 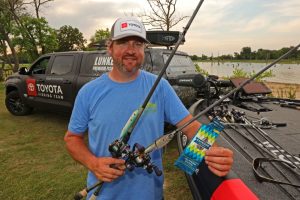 “I’m not saying it’s quite as good now as it was when Keith Combs averaged 37-pounds a day to win the Toyota Texas Bass Classic here at this exact same time of year in 2014 … but it’s darn close,” Arey said adamantly while chewing sunflower seeds at the end of a sweaty 13-hour practice day.

“I truly believe you’ll need at least two bass over 8-pounds every day for a shot to win,” he continues. “Do the math. If you need to average at least a 30-pound limit each day to win, that means you need to catch at least five bass over 6-pounds each day.”

It sounds unrealistic. And on just about any body of water in America it would be. But not here. That’s what makes Lake Fork iconic. And therefore, it makes this particular week of competition absolutely magical.

These Texas giants get big by consuming a steady diet of beefy gizzard shad. And much like you don’t feed Jenny Craig snack bars to NFL lineman, you can leave the finesse baits in the truck this week in favor of lures more in sync with chicken fried steak and mashed taters.

“A big Spook and an 8” Tater Hog swimbait are the size of baits you’re going to see a bunch of guys throwing this week. We’re trophy hunting this week,” grins Arey.

He says there’s still a bit of a shallow bite going on around the shad spawn, and obviously a great deal of fish out deep, but in Arey’s mind there’s a lot of magic to be had in the 10 to 15-foot deep zone too.

So, what’s the winning pattern when it comes to sunflower seeds?

Arey says he leans heaviest on sunflower seeds during long drives in his Tundra to keep his mind occupied, a habit he’s had for about a decade now

“If you buy this Chinook brand, make sure you get the jalapeno ranch flavor. But if you buy the BIGS brand of seeds, you gotta have the Old Bay Seasoning flavor,” advises Arey.

And much like the BIGS brand promises to only package the highest quality jumbo seeds, you can bet Arey will be focused on Lake Fork giants this week with every swing of the bat.