COUNCE, Tenn. (April 21, 2022) – After a rainy start to the morning, a field of 156 of the world’s best bass fishing professionals spent the day adapting to falling water and changing conditions to kick off the four-day competition at the   MLF Tackle Warehouse Pro Circuit Lithium Pros Stop 3 at Pickwick Lake Presented by Covercraft. Phoenix pro Jacopo Gallelli of Florence, Italy , weighed a five-bass limit totaling 23 pounds even Thursday to grab the early lead after Day 1, while pro Mike Surman of Boca Raton, Florida sits just 1 pound, 11 ounces behind Gallelli, with a five-bass limit weighing 21-5, good for second place.

The Pro Circuit competition awards a top prize of up to $135,000 and marks the third of six regular-season Pro Circuit events offering competitors a total season purse of more than $850,000. 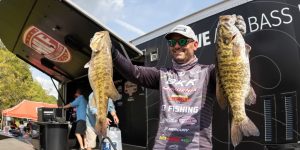 “I honestly don’t know how I did it,” said Gallelli. “I caught six fish in three days during practice, so I guess the takeaway is never give up. I got lucky – I only caught seven fish all day long – so it was tough, but I caught the right ones.

“This is probably the biggest limit I’ve caught in my life,” Gallelli continued. “We don’t have Florida strain bass in Italy, and I think the biggest bag I’ve ever weighed in a tournament there or in the U.S. weighed 22 pounds, 8 ounces.”

Gallelli said his ‘luck’, which brought him three big smallmouth and two good-sized largemouth, was a top-secret combination of a special location and a lure that he preferred to keep under wraps.

“The area where I started is pretty special – I had a limit of 19 pounds by 9 a.m. this morning, then was able to cull three times later in the day,” said Gallelli. “I didn’t go to that spot during practice, but I’ve fished there in the past and was so desperate this morning, I thought I’d give it a try. Within 15 minutes I caught a 3-pound smallmouth, then caught a 5-pound smallmouth a bit later. I fished it very slow and methodical, picking it apart, and came out of that area with more than 20 pounds.

“I could see the fish with my (Garmin) Livescope, and I really think I caught all the ones in that area, but if I can catch a big one over there on Day 2, that would be perfect.

“I feel like I did an awesome job, and I could not be happier,” continued Gallelli. “I had such a bad practice on Pickwick Lake and had a rough time at my last tournament at the James River, so I was happy to come here and have some redemption.”

Gallelli said he’d already received many messages from friends and family who are rooting for him in Italy.

“I didn’t expect this to happen today, and I don’t know if I can do this again tomorrow,” said Gallelli. “I’m currently 14th in Angler of the Year (AOY) points and one of my season goals is to qualify for the Bass Pro Tour, so if I get 12 pounds tomorrow, I’ll be super happy.”

Gallelli said his game plan for Day 2 is to go back to the same spot to see if his lucky streak will continue.

“I also have another area where I caught several quality fish today and lost a big fish against a structure, so hopefully I can fill up a limit on Friday between the two spots.”

The top 20 pros after Day 1 on Pickwick Lake are:

In Tackle Warehouse Pro Circuit competition, the full field of anglers compete in the two-day opening round on Thursday and Friday. The top 50 pros based on their two-day cumulative weight advance to Saturday. Only the top 10 pros continue competition on Sunday, where weights are zeroed, and the winner is determined by the heaviest weight from the final day of competition.

Throughout the season, anglers are also vying for valuable points in hopes of qualifying for the 2022 Tackle Warehouse Pro Circuit TITLE Presented by Mercury, the Pro Circuit Championship, where they will compete for up to $235,000. The 2022 TITLE will be on the St. Lawrence River in Massena, New York on Aug. 16-21, and is hosted by the Town of Massena.

Anglers will take off at 6:30 a.m. CT each day from the Pickwick Landing State Park located at 120 Playground Loop in Counce. Weigh-ins will also be held at the park daily at 2:30 p.m. Fans are welcome to attend the event or follow the live on-the-water action all four days of competition online on MLF NOW! beginning at 7 a.m. CT at MajorLeagueFishing.com.

The MLF Tackle Warehouse Pro Circuit Lithium Pros Stop 3 at Pickwick Lake Presented by Covercraft will feature live on-the-water coverage and a two-hour action-packed television show that will premiere in July on the CBS Sports Network.

About Major League Fishing
Major League Fishing (MLF) is the world’s largest tournament-fishing organization, producing more than 250 events annually at some of the most prestigious fisheries in the world, while broadcasting to America’s living rooms on CBS, the Discovery Channel, the Outdoor Channel, CBS Sports Network, the World Fishing Network and on-demand on MyOutdoorTV (MOTV). Headquartered in Tulsa, Oklahoma, with offices in Benton, Kentucky, the MLF roster of bass anglers includes the world’s top pros and more than 30,000 competitors in all 50 states and 13 countries. In 2019, MLF expanded its portfolio of catch, weigh, and immediately release events to include the sport’s strongest five-biggest-fish format tournament circuits. Since its founding in 2011, MLF has advanced the sport of competitive fishing through its premier television broadcasts and livestreams and is dedicated to improving the quality of life for bass through research, education, fisheries enhancement and fish care.