ICAST is now in our rear view mirror and the hangover from the high of all of the buzz surrounding new tackle, lures and gear has only now begun to wear off.

Each year the industry and the press get together to vote on the products that all of the exhibitors have entered into the New Product Showcase.  Winners are selected and the Best of Show awards are handed out based on that vote.  Those award winners represent some of the best and brightest stars in the individual categories, along with an overall winner.

While many of those products are amazing, the truth is that some of the exhibitors choose to not enter their wares into the voting, and instead show them to the media and buyers first.  We like to take the time after the show is finished and award our own Best of Show based on our tour around the show floor and allow our friends and contributors to name their own favorite products.

This year, along with managing editor Dan O’Sullivan, staff writer Jason Duran has provided his input, as has longtime industry friend and colleague Dan Mathisen.

With nearly 60 years of industry experience, we put the lures through our own tests and have arrived at our own Best of Show Awards.  This is not intended to take away from the awards already earned at the show, but rather to expose the products that caught our attention on the show floor.

Dan Mathisen’s Picks
Waft Fishing Bass Rods
Three years of development and thirty years in the rod business brought my attention to this South African company, Waft Fishing.  Waft has been a leader in the Carp and Offshore market for many years.  They actually hold the distance casting record as well. So when watching them develop a Bass Series Rods, Outlaw, Iron Feather and Bullet proof they have a series for all level of anglers.

The Outlaw Series rods are built from WAFT Micro-Tech Armored Carbon Fiber, resulting in one of the lightest, strongest and most sensitive rods I have held. These Japanese produced rods are even lighter when coupled with responsive Titanium Semi-Micro guides.  The rods were designed with various tapers that today’s bass anglers demand, and the proprietary Weight Management system will enable you to cast farther and more accurately and allow you to flick accurate casts on low trajectories to get under trees and docks more easily.

The Iron Feather series brings many of the same super sensitive lightweight features as the Outlaw series at a really affordable price point of under $200 dollars.  These rods will compete

with many rods currently of the market at twice the price.  Look for these rods to gain traction in the US market quickly as more anglers get them in their hands. The warranty will also be a BIG feature as they hit the US market with High End Japanese quality.

Freedom Lures
Freedom Lures won the Best Jig in Show at ICAST 2013 but the innovations in their line of products goes way beyond just the jig. The ability to change hook/hook styles quickly will help in a variety of situations.

The free swinging heads from Freedom Hydra allow paddle tail swimbaits to work even more effectively as the fixed heads of traditional heads dampen action. The swinging heads give the baits an unmatched wiggle and don’t allow the fish to leverage the bait to throw it.  This makes for solid hook-ups and less fish coming unbuttoned.

Fishing in the toughest cover and bend a point?  No need to throw it away just attach another of your favorite hooks.

Freedom has now added spinner baits and shakey heads to their fine line of products Football heads are also available, and perfect for those spotted-bass lakes.  All have great durable chip resistant finishes.

Uncle Josh MEAT
I have always been a fan of Pork.  Especially in jig trailers, and have spent plenty of time over the past few years tracking down traditional pork trailers.

Well let’s say pork is back and in a big way. Uncle Josh has completely re-tooled and now is in full production in all the favorite shapes and styles of traditional pork.

A very wise old man told me once when in doubt feed ‘em meat! Uncle Josh is helping us be able to do just that with their new addition to the Pork market the all new Uncle Josh Meat!

This looks to be better than Pork rinds and sweet tea on a Saturday afternoon!

Uncle Josh’s Meat is a revolutionary pork bait made from real pork fat without the hide.  This new cut produces a subtle lifelike action. Uncle Josh’s Meat has no hide, it’s easier to put on and take off the hook making it easy to switch between a variety of shapes and sizes Meat Night Crawler, Leech, Craw or Frog.

The Bait Ball Series of hardbaits features realistic images of baitfish inside the body of crankbaits, jerkbaits and other lures that give 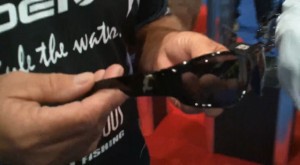 off the appearance they desired.  Bait Ball Series is a series of baits that will attract fish in the normal foraging mode because it looks like actual live fish inside the bait.

Vicious Vision Sunglasses
Vicious has become one of the more popular brands around, and the addition of their premium line of sunglasses with Dr. Doug Jordan will give anglers the highest quality polarization and UV Technology available.  We heard stories at the show about what new items, and fish in the water that pros are seeing while using Vicious Vision glasses, and they sound great.

I wear prescription glasses myself, and have paid as much as $800 to try and get a high quality pair of polarized glasses made only to 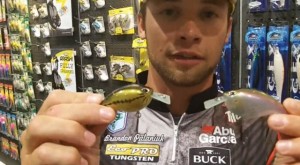 have them come back with the focal point so off that I couldn’t even wear them.  I’m really looking forward to trying these glasses out.

Storm Arashi Crankbaits
I spent some time with Brandon Palaniuk in the Rapala / Storm both, and when he showed me the Arashi crankbaits, I thought they were really cool.  They have a really neat look, but the circuit board lips and the self tuning line tie really make this a very ingenious crankbait.  Not only does it allow the lure to self tune, but it also adds to the “hunting action” of the lure. 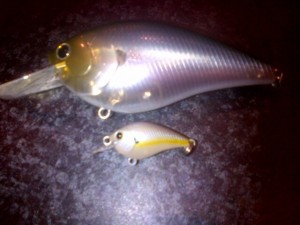 I live about a half an hour from Pickwick Lake, and I love to fish Tennessee River Lakes; especially when the big bass are on ledges.  Skeet Reese’s new Lucky Craft Magnum crankbaits are oversized baits that present the profile of big baitfish to bass looking for a big meal.

The squarebill version is supposed to run 15 feet on 25-pound-test, while the deeper diving version will hit 25 on the same line.  I cannot wait to get my hands on these things and get out on the ledges of Pickwick and do some serious damage.

Lew’s Spinning Reels
Lew’s has developed a line of baitcasting reels that have truly become industry standards, and now their spinning reels have followed 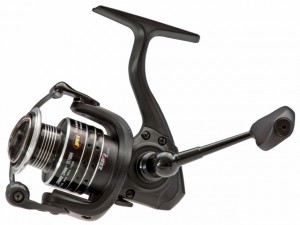 suit.  The new Team Lew’s Gold, The Tournament Speed Spool and the Speed Spin Series.  High end bearings, high end performance and high speed retrieves at any budget, this is truly a revolution in spinning reels. 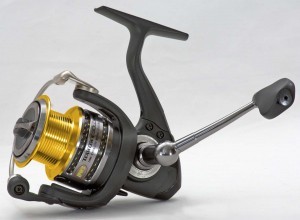 We typically try to avoid any redundancy when awarding our own individual Best of Show Awards following ICAST, but with the Lew’s Team Lew’s Gold spinning reel, I have to echo Jason’s call on that one.  This is the spinning reel that I’ve been waiting for from Lew’s.

A carbon fiber body, sealed bearings and sealed drag system, along with wide spool design, large line roller for reduced line twist, and a high a high speed 6.1:1 retrieve.  The Team Lew’s Gold Spinning reel is super light and carries a price tag at $129.  Shoot, this is a lot more reel for the money than anyone could expect.

River2Sea Ish Monroe New Jack Flippin’ Hook
There are a lot of great hooks on the market; especially for Flippin’, but Ish Monroe and River2Sea have come up with a new Flippin’ 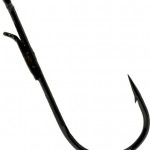 hook that allows anglers to tie a knot other than the Snell Knot.  The New Jack Flippin’ Hook has a second eye welded to the back of the shank that allows anglers to run their line through it and tie to the second eye with almost any other popular knot.  The second eye also acts as one of the best baitholder / keepers barbs on the market as well.  The New Jack Flippin’ Hook is available in sizes 3/0 to 6/0.

SPRO Fat Papa New Olive Craw Color
Normally, we try to focus on innovative products with some true technology of innovation behind them, but this new Olive Craw color on Russ Lane’s Fat Papa series of crankbaits is quite possibly the finest 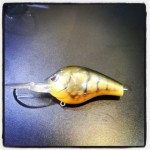 production paint job we’ve seen on a crankbait yet.  The attention to detail on this finish is unbelievable.

Strike King Rage Blade
Leave it to Strike King to figure out how to improve upon an industry standard.  One of the problems with the vibrating jigs on the market is that they tend to lose fish because of interference between the blade and the hook.  Strike King found a way to change the design so that there is less chance of losing fish.

The company redesigned the shape of the blade, and put the weight on the bottom of the blade itself and 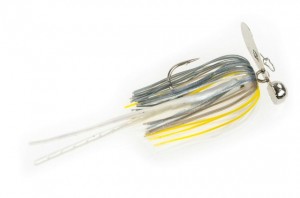 attached the hook to the connection behind the blade.  This was one of the more intriguing products we saw at the show.

Phenix Redeye Travel Rods
Phenix is a proud multispecies company that added some serious weapons to their travel rod series this year with their new three piece travel rods.  This lineup offers three models; freshwater casting, freshwater spinning and a saltwater version that have high end components and come in a hard case to protect it in the truck.  These new pack rods are the kind that any fishing enthusiast would 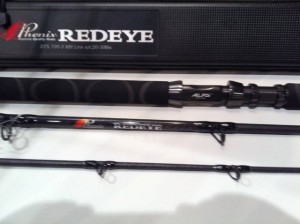 love to have, and it’s been a while since we can remember putting such though and high end materials into a travel rod.

Buck Knives Splizzors
Bill Lowen had been working with buck Knives on a combination scissors / needlenose pliers that would make a a multitool jealous for the past couple years.  That tool, the Buck Knives Splizzors was introduced at the show.   This thing has a ball bearing, Teflon disk pivot point so that the scissors part can cut braided line with ease, when when held limp, and still has enough power to act as a solid 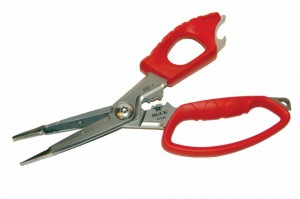 set of needlenose pliers in the boat.  Replaceable blades make it a nice touch too, even though Lowen said he hasn’t replaced the blades on the first prototype they provided him and that was two years ago.  This is one neat, effective tool that anglers will be able to pass on to the next generation.

Livingston Lures – Pro Series
We got the chance to see some of the prototypes that Livingston Lures’ pro team of Bret Chapman, Randy Howell, Jeff Kriet, Hank Cherry, Stetson Blaylock and Jacob Powroznik have been working on with chief lure designer Jerry Rago.  The samples were 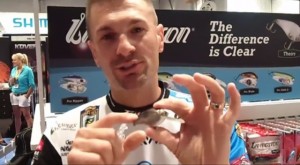 functional prototypes that were hand molded by Rago based on the input of and tested by the team.  The lure shapes are unique, and they are functional, and thanks to Livingston Lures unique technologies, the lures will have some serious advantages that we cannot divulge at this time.  However, when they pull off all of the different Pro Series bodies with their integrated technology, this is an impressive compilation of products by a solid team and an aggressive company.