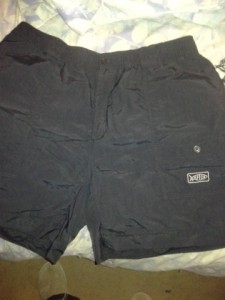 We spend quite a bit of time here at Advanced Angler dissecting equipment.  The fashionable items to review start with lures and baits, rods and reels, line etc.; and with good reason, they drive our fishing economy.

I’ve always said that the best inventions com from someone recognizing a need, or a deficiency and creating something that fills that gap.  Today, I want to focus on something that did that for me personally.  I did not create any lure or product, but rather started on a journey three years ago based on a need.

Today we’re going to look at something that would likely be an afterthought to many of us – particularly Shorts and underwear.  I know what you’re all thinking “what the?”  I’m not kidding.  I started looking for the perfect fishing / fishing media clothing three years ago when covering the Toyota Trucks All Star Week in Alabama – in August.

It took me until now, but I found my system in AFTCO Original Long Shorts and Performance Underwear.

My story begins in L.A. – lower Alabama – in the summer.  I was covering the Bassmaster All Star Week festivities when I discovered performance clothing.  It all started with a shirt.  I’m a big fan of Bassaholics clothing, and Dan Norman has been good to me with sending me shirts to wear, that event was no different.

He sent me to Montgomery with three or four new long sleeve t-shirts to wear while on the water.  I started wearing long sleeve several years ago after burning my arms badly.  At that moment, all I had worn was the traditional cotton shirts.   One of the shirts that I had received was olive 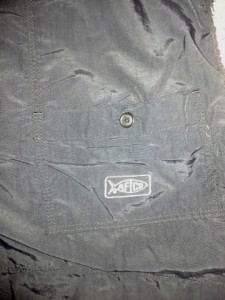 green, and I wore it on the first day there.

My wife Christina had done the laundering of the new shirts for me when I packed so that the shirts would be soft and clean.  It was a sharp looking shirt, but after a day in 95-degree temperatures with 98 percent humidity, I sweated the thing camo.  The olive green shirt had become many different shades of green from all of the perspiring I did on Lake Jordan that day.

I discovered performance fishing shirts on that trip.  I found a couple of quick dry Columbia long sleeve shirts at Bass Pro Shops in Prattville, and have worn that style of shirt ever since.  They wick sweat away, and dry quickly if I get them wet; they also help me remain cooler with any little bit of a breeze.  I don’t wear the Columbia brand anymore; I have a friend in the garment embroidery and customization business who sourced some others that he could logo with Advanced Angler.  I now wear those

Lower Half
I tried wearing those shirts, and they helped, but I still hadn’t adjusted my shorts yet.  I was still resembling a toddler or octogenarian who had an accident by the end of the day because I had sweated through my cargo shorts.  I found some inexpensive board shorts and camping shorts at Walmart that helped, but they were less than durable.  The material was thin, and I tore pockets and even split the seam on one pair.

At $19, it didn’t really matter if they lasted a summer or not, so I stayed with those for a season or two.  They filled a need. 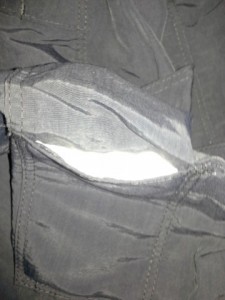 I found out that I was missing one very important part of the equation however, when I was covering the major League Fishing event on Chautauqua Lake last summer.  That part was underwear.  No matter how many quick dry garments you wear, if the garments next to your skin hold moisture; you won’t dry out at all.

I was following Denny Brauer in the Championship round, and he entered a little backwater marina that I didn’t want my boat driver to follow him into.  So, I asked him to hold my camera while I got out of the boat and followed Brauer on land around the marina.  I climbed out of the boat and into water up past my waist, fighting my way through the muck to the bank.

I was soaking wet all day after that.  My shirt dried, parts of my shorts dried, but I was swamp crack for most of the rest of the day.

I researched online and went to REI after I got home and found some quick dry underwear that seemed like they would do the trick, and bought two pair.  I tried them at home on a fishing outing, then tried them again in October at the next Major League Fishing event.  I dried quickly after Hurricane Sandy dumped rain on us in spurts for three of the six days there, but once I got back to the hotel and got undressed, the odor from the underwear was unbearable.  The polypropylene and spandex dried quickly, but it did not breath and I smelled like I had rolled around in the dirty laundry of four college sports teams in the locker room.

AFTCO to the Rescue
I bumped into a friend from my Outdoor Friends Forever outings, Simon Morrow, in the AFTCO booth at the Bassmaster Classic.  Simon used to follow the tours, and now with family and responsibilities has settled into a role as a sales rep for AFTCO.

I knew AFTCO from their AFTCO roller guides in the saltwater realm, and I knew about their line of Guy Harvey and Al Agnew graphic t-shirts, but I didn’t know they had as extensive a 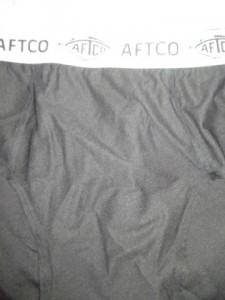 line of performance fishing wear as they do.

Simon arranged for me to try out their AFTCO Original Long Fishing Shorts and some of their Performance Tech Underwear.  He told me they would be durable, dry quickly and that I wouldn’t smell like I had tried to steal the uniforms of an NFL team after a game.

I took his challenge, and I have to say, he was right.

Lake Lanier
I packed only the AFTCO gear this past week when I went to Lake Lanier for the SPRO, Sunline, Big Bite Baits and Gamakatsu media days.  I put them through their paces.  I wore the same pair of shorts (and I must admit) underwear on the water for two full days.  Give me a break, I was product testing dang it.

They dried quickly, and the best part – no more funk (hey, the packaging for their underwear said that on it, not me).  I was able to open my dirty laundry bag when I got home and not have my wife run out of the room with her nose clutched between her pointer finger and thumb while gagging.

Features
The AFTCO shorts have plenty of pockets with buttons on them that make it easy for securely carrying any item you may need quick access to, lip balm or whatever.  They are made of a much more durable material than some of the cheaper shorts I’ve purchased elsewhere, so they will last a lot longer than the others I’ve tried.

The AFTCO shorts have a  button and zipper fly that make quick bathroom breaks a breeze as opposed to the board shorts that require you puling your whole shorts down to take care of your business.  They also have belt loops in case you want to wear a belt. 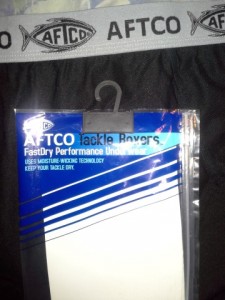 And, Just so that you know that AFTCO is thinking of the angler, they have a cool pocket on the right leg that is lined with a heavier ripstop nylon material that is built to hold piers securely without fear of them poking through the pocket, tearing the shorts and falling through the floor.  I actually used that pocket to hold my little video cam for on the water filming.  It was secure in the pocket, and easy for me to find when it was time to film with one of the pros.

The Performance Tech Underwear are light, very comfortable, made of a fast drying nylon / lycra material that stretches, yet keeps your “tackle” secure.  The best part is that they wick moisture away, and because they have AFTCO’s Microbe Shield technology, they do not create an odor problem.

I have finally found the system that I will wear from spring through fall while I am on the water fishing, or covering fishing tournaments, and I will be ordering more pairs of both.  The Original Long Fishing Shorts carry a price tag of $49 while the Performance Tech Underwear run $21.99 on the AFTCO website.  When I factor the durability and effectiveness of the pair, they are an absolute bargain.