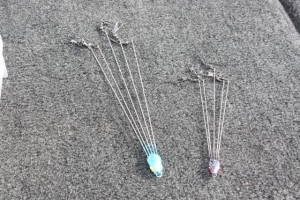 Umbrella rigs have dominated the industry landscape since Paul Elias won the FLW Tour event on Lake Guntersville a little more than a year ago on the Alabama Rig by Slick Lures. The amount of companies that launched their own version of castable umbrella rigs was staggering.

Many of them rushed out their own version with speed at the forefront, putting out those that performed well enough. However, without any thought, they were doing little more than mimicking. Jewel Bait Company of Mountain Home, Ark. was not one of those companies.

Jewel released their Swim Gem brella LT after thinking about the things that were lacking in the rest of the products on the market. The first innovation that they put on the market was a finesse type Gem brella LT, a version that
allowed the average angler to toss the rig without specialized gear.

That small version proved successful in the clear water lakes of the Ozark region and they have done the same in Western Lakes, or in bodies of water with high pressure or clear water. 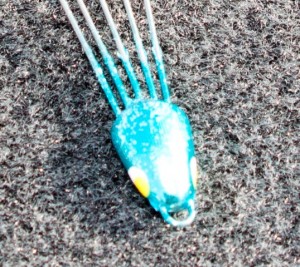 The wire system is encased in what is best described as a flattened tear drop shape for the head. However, instead of both sizes being uniform, Jewel designed the head with a rounded side that protrudes; this side is supposed to be rigged in the downward position when setting up the rig to aid in true tracking when retrieving.

The head is molded out of a special Jewel Bait Company proprietary material known as Metallulite, a special, environmentally friendly blend of alloys helps with several facets of the manufacturing process. the first being a lighter material, so there is less tumbling on the casts, and perhaps the most important is that it melts at a lower temperature, so it preserves the characteristics of the wire, resulting in less issue with breakage.

There are two sizes of the LT, a smaller six-inch version with .035 diameter wire and the larger seven-inch version with .040 diameter. For reference, the .040 wire is used in a lot of the mass produced spinnerbaits available on the market, and the .035 is used in more of the custom, premium brands for higher vibration. 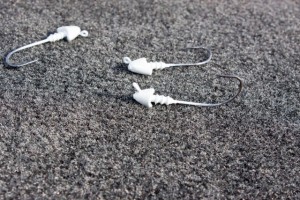 The snap swivels on the ends of the wires are a black nickel barrel swivel type that seem durable enough. We did not experience any bending or opening of the snaps when fighting fish or pulling the bait free from snags.

Functionality
We really enjoyed the fact that we could throw the six-inch version of the Swim Gem brella LT on conventional tackle. So many of the different versions out there require 65 to 80-pound-test braided line and heavy Flippin’ gear or more likely, specialized swimbait gear.

We threw the Swim Gem brella LT on a 7’3″ medium-heavy Micro Magic rod and a conventional 6.4:1 Lew’s Tournament Pro reel spooled with 17-pound-test Berkley Trilene 100% Fluorocarbon without an issue all day long.
The rig cast well too. In most instances, when a castable umbrella rig is made using a lead head, the weight of the head battles with the jigheads on the business end and the result is tumbling and tangling on the cast. The lighter, polycarbonate or composite heads do not seem to have that issue and the Swim Gem brella LT did not have any issues either.

We like the ability to more easily position the wires due to the “fanned out” shape of the wire harness itself. We like positioning the two outer wires to the top, with the two inner wires in a down position and leaving the center wire straight for our setup. This leaves the longer center wire in its original position, which is optimal because the majority of strikes occur on the center bait in the ball.

We also prefer to setup the rig with lighter, 1/8-ounce Jewel Rig Jigheads towards the upper side of the rig, and use the heavier 3/16-ounce version of the bottom for better tracking. Because we do most of our testing in California, where we are allowed the use of three hooks on our rigs, we used the 1/8-ounce head on the center wire and a pair of the 3/16-ounce heads on the bottom wires. 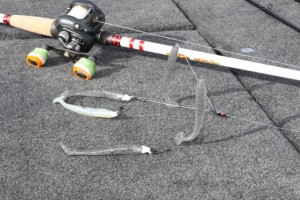 We actually used a pair of side cutters and took the swivels off of the top wires and used an Owner CPS screwlock to screw the baits directly onto the wires as opposed to the swivels to avoid the dummy baits spinning instead of swimming without the weight attached for balancing.

On a separate note, we found the Rig Jigheads actually held our Gene Larew Sweet Swimmers very well with their keeper barbs, kept the snug to the head of the jigheads and actually helped create a nice side-to-side wobble on the swimbaits which can help draw strikes.

Conclusion
The Jewel Swim Gem brella LT quickly became one of our favorite umbrella style rigs, largely because of the fanned out position of the wires. Having the ability to bend the wires less in the initial rigging can only help reduce the threat of breaking under pressure. Couple that with the lower melting point of the Metallulite and the wires seem to hold up better than others. 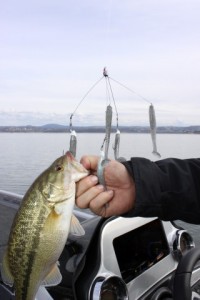 We threw the Swim Gem brella LT for most of the day while fishing for spotted bass on Folsom Lake near our Advanced Angler headquarters and managed to catch several keeper spotted bass up to two pounds during testing and never experienced a failure of the wire.

Of course, there are occasional casting tangles associated with a rig of this type, but that is unavoidable. The rig ran true, held up and gave us two size options for smaller baits and one for larger baits. Also, with a retail price point at under $14, it is an affordable option for anglers wanting to give this style of fishing a try, but advanced enough to be used by anglers experienced in fishing a rig.