You know, I get pretty disgusted with myself sometimes. I worry about stupid crap, wonder about so many things that I have little control over or no need to even consider anyway. 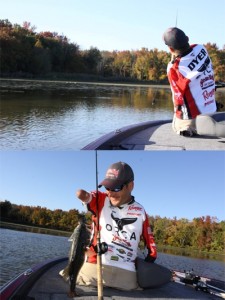 Advanced Angler has had a good year in 2012, the site has grown, thanks to you, the readers, the promotional partners and the anglers who lend their expertise to help all of us become better anglers. However, personally, it’s been what I would call an up and down year. It’s December 19 and I’m not sure where the year went. I missed things with my family because of travel and work in the office that are the sacrifice of a person trying to grow a business.

I love what I do, and I’m grateful for the opportunity to do it, and blessed with the chance to work in an industry I love. However, that doesn’t mean it isn’t hard to stay motivated to write every day. Putting out as many stories as I do throughout a year can drain me mentally. There have been a couple days
I’ve called friends and colleagues looking for ideas for articles.

Then, while I am digging through photos for a year-end photo gallery of my favorite photos of the year, I come across images that make me pause. I found images of some of the more remarkable people I’ve ever met.

I’m fortunate to know two people who have put their own “situations” aside and choose to live life to the fullest. I’m fortunate to have spent time and laughs at shows, tournaments and in the boat with, and one that I can call a friend, and they are both people I look up to.

They are both tournament anglers, and in fact both consider that a major portion of their professional careers. But, even if they never picked up another rod, they are both incredible inspirational and if there wasn’t a camera pointing at them, they would both be the same way they are today.

The truth of the matter is this – society would completely understand if they wanted to be surly and selfish from time to time; but, you would be hard pressed to see them doing anything other than serving people.

I was reminded today when I came across pictures of Clay Dyer and Jim Hardy that no matter the situation, we have something to give, no matter our limitations.

In both of their cases; whether by birth, or coincidence, Dyer and Hardy have limitations. But, you’d never hear anything other than a desire to achieve levels of success professionally and personally with either one of these guys.
While I was on the water with Clay at the 2012 Strike King Lure Company writer’s conference at Kentucky Lake, I spent some time in the boat with Dyer. I’d spent a good amount of time around him at shows and events over the years, but, this was different, and eye opening.

Clay usually runs his chair up to me at shows or events and gives me a high five, shakes my hand and we get caught up quickly before we head out on our way to our next business or promotional endeavor. With only us and two other people in the boat that day, it was an intimate setting, and I had an opportunity to talk to him like never before.

I experienced his sense of humor that day as I’ve become accustomed to. But having asked him what the dumbest question anyone had ever asked him before, he told me a story about a news photographer that was tasked with capturing images on the water for a story. The photographer asked Clay how he would recognize him out there. Clay responded by saying that he would be the three-foot tall guy on the front deck of the boat with a rod and reel – then giggled.

However, I must admit that I likely asked him the dumbest question ever. In my own limited perspective – with the use of all of my limbs – asked Clay what his goals were as an angler. He responded by telling me about his dreams of winning anglers of the year, Bassmaster Classic and FLW Cup crowns. I must admit to being sheepishly embarrassed that I had asked a question and expected a man to give me less of an answer.

The truth is, Clay knows what his “handicaps” are and never thinks about them because of his zeal for life and his desire to inspire people. He doesn’t do it for his own attention, or his own glory, but rather, because he genuinely loves people and wants to spread the true joy he feels inside.

Hardy is similar. An athlete his whole life, his life changed in 2001 when a hunting accident left him in a wheelchair. But, don’t think that he views things himself being disadvantaged. Hardy instead spends as much time as he can fishing on his beloved Lake Jordan in Alabama – out of his own Skeeter boat – for his favorite quarry, the Coosa River spotted bass.

Hardy competes in tournament as a boater, and in team tournaments with his friend Braxton McNaughton from NetBait and his childhood friend Greg Vinson when he is not fishing Elite Series events. However, Hardy’s time has been largely taken up by his desire to share his love of the outdoors with people who rarely get a chance to experience the outdoors themselves, special needs youth. 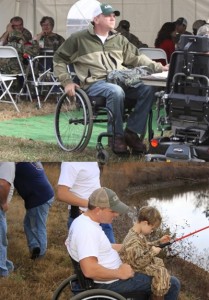 With the help of friends in and out of the industry, Hardy founded a group called Outdoor Friends Forever, which takes kids with varying degrees of disability on deer hunts twice a year in the fall and winter and fishing trips the rest of the year.

Having been able to hear his desire for the foundation over the phone, and now having seen an event in person, I’m more than proud for my friend; I’m happy for him. he has a true, heartfelt joy for sharing these experiences with the kids that come to their events. I saw it in person when I watched him get choked up at the excitement of one of their hunters at their last hunt.

Both Jim and Clay would probably have asked me to not write this had I told them about it before. But, the truth is, I find my inspiration for stories at random times, and sometimes you just have to go with your gut.

Both of these men have devoted their lives to sharing their true joy, their love for their sports and most importantly, their love for people without ever caring who is looking, or for making sure that someone is paying attention.

They are remarkable people, with remarkable stories doing the simplest thing they know how to do, share their hearts, and it reminds me to keep pushing forward myself when I get busy or overloaded. Why did I write this? I don’t know for certain, but, I just felt moved to share this pair of remarkable people with you, and hope that the rest of us can keep up.