Rewind
The 1996 Bassmaster Classic was held on Alabama’s Lay Lake, and was headquartered out of Birmingham.  It was the third time in the five year span that Birmingham hosted a Bassmaster Classic, however, the previous two were contested on Logan Martin Lake.  The Classic was a summer affair in those days, and the anglers were greeted with the usual hot and muggy conditions of summer in the South.

One thing that made the 1996 Bassmaster Classic unique was that the winner, George Cochran was a repeat winner.  Cochran, who previously won the event in 1987, became one of only three anglers at that time to have won the Classic more than once.  The other anglers were Rick Clunn, who has won four Classics, and Hank Parker, who won the event two-times himself.

The 1996 Bassmaster Classic was also special because it was the first time that the winner was awarded $100,000 for the winner’s share of the purse.

The Winning Pattern:
Cochran said that the pre tournament chatter was suggesting that the event would be won in deep water.  Cochran reported finding his areas, but not his winning fish in his pre-practice period, and that he found two productive patterns that would hold solid for the event.

“I caught all of my keeper fish on two different Strike King spinnerbaits; in two bays that were completely different,” Cochran said.  I had a bay that was shallow and full of stumps, and I had one that was deeper and had trees that the fish suspended in.” 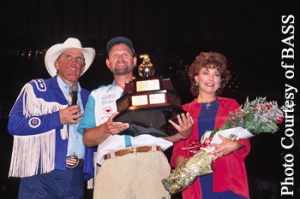 He located both bays in pre-practice while he was fishing with his son, and while he could catch a few quality fish on the deep hole, there weren’t many to be had.  When he located his shallow bay, it held a lot of one to two pound keeper fish.  “I was practicing with my son when I found the shallow bay, and he told me that he didn’t think the fish were big enough to win on,” Cochran related.  “I told him that it was August, and that anything could happen.”

When he returned for the first day of the tournament, he was able to catch a couple of limits in the shallow bay on a chartreuse and white 3/8-ounce Strike King Pro Model spinnerbait with a small Colorado kicker blade and a larger Indiana blade.

After he had what he deemed to be a decent limit, he went to the deeper bay to try and catch one or two of the bigger fish he had located on the deep trees in an attempt to increase his weight.  “He continued to throw a chartreuse and white spinnerbait, however, it was a larger 3/4-ounce Strike King Pro Model with two size 3.5 willowleaf blades he had placed on the lure for deep slow rolling.  He reported being able to cull up off the deep trees, and he opened the tournament in fifth place.

The second day proved to be the pivotal day of the event for Cochran, as he made an adjustment based on how the fish were responding to his presentations.  “I was struggling to get bites on the second day, and I noticed that fish were boiling on my spinnerbait in the shallow bay,” he said.  “I’d seen it before, so I started bringing the bait up to the cover and would bump the stump with the bait, and then kill it momentarily; that’s when I started getting more strikes.”

He said that his catch rate increased.  “I caught something like 15 keepers the first day out of that area, but after figuring that out, I was able to almost double that number,” he said.  “I added a trailer hook, and would make multiple casts to the same stump to try and trigger a strike, and it worked.”  He reported that the same type of retrieve also produced strikes on the deep trees.  His increased action moved him to third place in the standings.

He drew the now deceased, legendary B.A.S.S. reporter Tim Tucker as his press observer for the day.  As the day wore on, Cochran was able to pull together a limit, but neither he nor Tucker felt he had enough with a little more than an hour to go in the tournament.  “I told Tucker that I was going to go to a little stretch of the bay that I hadn’t fished yet,” he said.  “I could see every stump in that stretch, and I caught eight or nine keepers to improve my limit.”  His final weight of 31 pounds, 14 ounces was enough to beat out Davy Hite by one pound even. 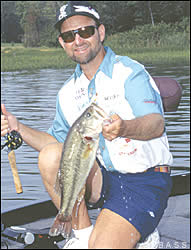 George Cochran with One of His Fish from the 1996 Bassmaster Classic – photo courtesy B.A.S.S.

Wrap Up:
Cochran said that the win in 1996 was something that made his career feel like it was legitimized.  “Winning in 1987 gave me the opportunity to fish full time,” he said.  “But, to win it a second time meant that it wasn’t a lucky thing the first time; it showed I could do it again.”

The win showed his dedication to focusing on big events.  “I know there are important things out there that people go after, but I’ve never concerned myself with Angler of the Year titles,” he said.  “The Bassmaster Classic was always where the big money was at, and that was my focus.”

He reported struggling before he won his 1987 Classic, and said that he wasn’t sure that he would have been able to remain on tour had he not won in 1987.  The 1996 win provided him a different feeling all together.  “After I won the first Classic, I worked bonuses for a Classic win in to my sponsor contracts, and that made a difference for me and my family financially,” he said.  “That set my family in a place where we could put some money away for college and start working for retirement.”

Cochran is one of only a handful of anglers that have won the Bassmaster Classic and the Forrest Wood Cup in their career.  He was able to win that event in 2005 on Lake Hamilton in Hot Springs, Ark. near his home.