Rewind
The 2005 Bassmaster Classic went down in history as not only the 35th version of the event, but also a low weight tournament.  It also was one of the toughest tournaments B.A.S.S. had ever held.  Throughout the three day event, a total of eight limits were weighed in by the field.

The bite was so tough that six anglers failed to weigh a keeper bass in the first two days of the competition.  Among those anglers was Greg Hackney, who was the Bassmaster Rookie of the Year in 2004.  Another surprising name was 2002 Bassmaster Classic Champion Jay Yelas.

So tough was the fishing during the tournament that the field as a whole weighed in a total of 219 bass for 232 pounds, 12 ounces.  By contrast, the field managed to catch 423 fish for 947 pounds, 4 ounces the year before at Lake Wylie.

The event was also marked as the last “Summer Classic.”  Before the start of the 2005 season, B.A.S.S. officials made the announcement that the event would be moving to February for the 2006 year.  What this also meant was that the 2005 season served as a qualifier for two Bassmaster Classics; make the 2005 Classic and the 2006 Classic was part of the deal.

In the end, Kevin VanDam, the 2001 Bassmaster Classic Champion outlasted Aaron Martens for the win.  VanDam was able to finish six ounces ahead of the West Coast phenom; it was the third runner up finish in the four Classic from 2002 for Martens.

VanDam claimed victory with the lowest winning weight in the history of the event.  His 12-pound, 15-ounce total was enough to earn him his second Bassmaster Classic crown and $201,500 in prize money.

The Winning Pattern:
VanDam said that he had no experience in the area before heading there for the pre-practice period.  He said that he had fished the Ohio River, and the Mississippi in the past, and knew that they could be tough.  Howevr, his lack of experience on the Alleghany, Ohio and Monongahela Rivers that make up the Three Rivers area of the Pittsburgh downtown left him little comfort.

He spent the first practice day in the lower pool and caught no keeper bass.  I caught a few small ones, but really didn’t give the area much of a second thought.  On the second practice day, the Kalamazoo pro spent his day in the Three Rivers pool, and he caught a dozen keepers.  When he fished the upper pool on the third day, he made the decision to stay in the Three Rivers pool for the tournament.

“I made the decision to focus on keeping my line in the water,” he said.  “If I locked through, I would waste the time going through the lock, and I needed to fish as long as possible to give myself a chance.”

With the difficulty of the conditions, VanDam knew it would take keeping his line wet, and processing as much information possible throughout the day as he could.  “I really thought that I would be able to catch a limit out of the Three Rivers Pool,” said VanDam.  “Having a limit would be the most important thing there.  The fish were going to be small, and if you could get a limit; you’d 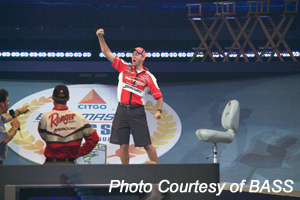 have a good shot.”

It was during his final official practice day that he realized the bait responded to the current in a predictable way.  “The baitfish seemed to come up towards the surface when there wasn’t any current,” he said.  “The smallmouth would follow, and they were fairly shallow in the water column.”

He spent the first day of the tournament throwing mainly a finesse worm, and he managed to catch three keepers that weighed 4 pounds, 11 ounces.  His catch included a 2-pound, 14-ounce smallmouth that tied him with Stacey King for the big bass honors for the day.  His catch found him in fifth place, a pound and seven ounces behind day one leader Jimmy Mize, who boated a limit for 6 pounds, 2 ounces.

VanDam returned to his area on day two, but his worm bite didn’t produce because the water had dirtied.  He responded by picking up a 1/4-ounce Strike King Pro Model buzzbait and an original Rattlin’ Rogue jerkbait.  “I fished anything that I could find with those lures,” he said.  “Bridges, seawalls, and creekmouths with gravel on them; they all got fished.”
The dirtier water pulled the baitfish to the surface, and VanDam was prepared for the move with the surface bait and the shallow jerkbait.  VanDam boated two more keepers that weighed 3 pounds, 7 ounces, bringing his total to 8 pounds, 2 ounces.  He would move up to third place behind Aaron Martens, who had increased his total to 9 pounds, 1-ounce with four more keepers.

Martens reportedly had his limit fish in his livewell, but was concerned that one of his fish wouldn’t measure, so he released it before checking in.  In third place was Mike Iaconelli only on ounce in front of VanDam with 8 pounds, three ounces.
Seeing his opportunity, VanDam made the decision to stick to his aggressive pattern on the final day.  He related that it was the kind of decision that he might not have made in previous years.  “I started to realize that I had to have a lot of confidence in what I was doing out there,” he said.  “I learned with my first Classic, and in tournaments since, that I had to take some chances in order to shine on the brightest stage; so that’s what I did.” 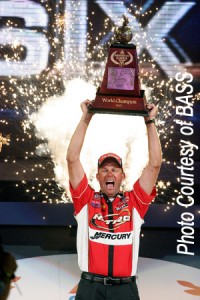 VanDam caught his first limit of the tournament, which weighed 4 pounds, 13 ounces, bringing his total weight to 12 pounds, 15 ounces.  Martens came in with three fish for 3 pounds, 8 ounces and fell short by six ounces of claiming the Angler of the Year and the Classic in the same season.

The win was VanDam’s second in the Classic, but it was also the third B.A.S.S. win in a row.  He had won consecutive E50 tournaments prior to the Classic, and the feat made him only the second person to win three consecutive  B.A.S.S. tournaments; the other being Roland Martin.

Wrap Up:
VanDam said the Classic win in 2005 was different for him, especially that it was his opportunity to experience the stage that had been built by the involvement of ESPN in the organization.  “I got to see firsthand what it meant to be the Bassmaster Classic Champion before ESPN purchased B.A.S.S. and after,” he said.  “The first win was amazing, one of the highest moments in my career.  But, the recognition that ESPN brought to the event was a big deal.”

“I was able to see the fans responses, and the overall awareness of the sport grow so much from 2001 to 2005,” he said.  “It was exponentially larger, and it made a difference in the overall reach of the accomplishment.  ESPN wasn’t perfect by any means, but there are some great careers going right now because of what their involvement in the sport meant, and mine is one of them.”