Brent Chapman has made a name for himself on the Bassmaster Elite Series.
The 10-time Bassmaster Classic Qualifier has become one of the more consistent anglers on tour the last several seasons. In fact, when the 2012 Bassmaster Classic kicks off in Shreveport, La. next February, Chapman will make his fifth consecutive Classic appearance. 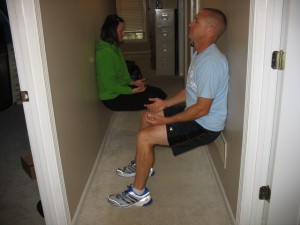 That’s not to say that his 2011 season was the picture of perfectness. Chapman, the Bassmaster millionaire from Lake Quivira, Kan. cashed four checks in the eight event campaign and had to wait out a complicated scenario at the last event that had him squeak into the last Classic qualifying spot.

Not the usual consistency with which Chapman has become known for.

“I was giving a seminar at a promotional event at Roger’s Sporting Goods in Liberty, Mo. and I met a man named Travis Perret,” Chapman said. “Travis is an Exercise Physiologist, and he works in trying to help people balance their bodies for pain management and performance.”

Perret is an Exercise Physiologist, and he describes his work in such a manner. “I would say that I am most closely aligned with a Chiropractor,” said Perret. “I work to help align people’s bodies for the purposes of managing pain, and in the case of Chapman; for performance. While a Chiropractor manually manipulates the body, I show patients how to train their muscles to keep their bodies aligned.” ” 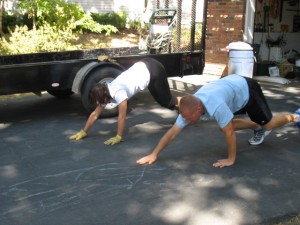 While therapists work in strengthening specific body parts, Perret has a more holistic approach to the body. “The body has a way of compensating for pain,” he said. “If you sprain your ankle, you learn to limp – I teach the body how not to limp.”

Perret said he is not an inventor of exercises; instead, he uses some of the old standards used by schools and the military; which he mixes with yoga and other movements to strengthen specific muscles. “I’m no specifically concerned with helping a person look great on the beach,” he said. “I am trying to help muscles that they’ve never thought of before create a level of physiological balance in their core that makes them perform better.”

The key is posture. In the case of bass anglers, learning how to help the body better absorb the pounding of boat rides, standing on one leg while operating a trolling motor, and whipping a fishing rod about all day is something he works with Chapman on.

The Effects
Chapman said that he is feeling the effects of working with Perret already. After only six weeks of two hands on sessions, along with leave behind instructions, he feels stronger, and it has helped him in his offseason love – bowhunting for deer.

“I know it may sound funny, but I can tell that it has had a difference already,” said Chapman. “I’m more confident, I’m stronger, and I feel like I have the stamina to hunt longer and be more on point while I’m in the woods.”
Perret said that is precisely the effect he is hoping for. “I want my clients to be at their best at the end of a four day tournament, or when conditions are at their worst,” he said. “In the Bassmaster Classic, when things are cold and miserable; the body needs to be at peak efficiency, and if it’s not, decision making processes will be less than at their peak; we try to help make people stronger, more confident, and have more stamina.” 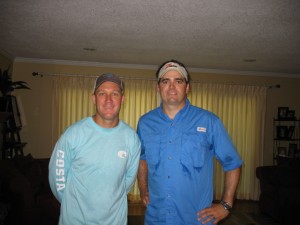 Hands On?
One might think that this type of process would be a very time consuming hands on process. But, Perret said that he has several clients that are out of his home state of Kansas. “I work with people who send me photos and / or videos of them in certain positions and I am able to customize a program for them,” he said. “I meet with them on the phone or by email and we discuss how things are going for them and make adjustments as needed.”

The Outlook
Chapman expects to be at his best operating efficiency when the 2012 Classic starts and the Elite Series schedule kicks off not soon after. “I can feel it deep in my core,” he said. “I feel stronger, and I know that is going to relate to more effective time on the water. Don’t get me wrong, it is fishing, and I’ll have to do my work, but I feel like I’m in a better position than I’ve been before.”

Perret concurred. “Brent’s been working hard, and he has the help of his wife Bobbi, she is a very hard worker,” he said. “Their willingness to push each other will help them start out on the right foot. They both have the same goal – to help Brent succeed on the water, and together they make a strong team; I’m just trying to help keep them in balance while they try to do that.”

Perret can be reached at www.felixfishing.com