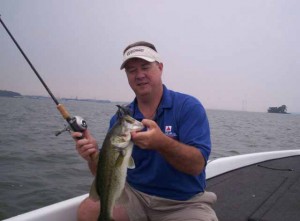 Over the last 20 years or so I’ve been fortunate enough to jump in the boat with some of the top pro anglers on the Bassmaster and FLW tours at writer’s events and tournaments, the latter of which obviously is more high-intensity and offers greater insight to their mindset.

The writer’s events are fun. We’re relaxed, able to discuss things more in-depth, talk about and photograph specific lures and how to rig them, and put them in action on the water. These events, typically hosted by tackle manufacturers, provide publicity for the products and pros but give the anglers and media folks a chance to get some work done in an informal setting. The results are what you see on this site and others, magazines and television shows or videos.

Tournament days? Man, the media folks who ride along today — if they’re smart — watch, learn, take notes and follow up later. There’s not much hardcore work getting done except by the pro on the front deck. FLW’s and PAA’s co-anglers and BASS’s marshal observers have supplanted most of the outdoor media riding along, but a sharp-eyed guy in the back of the boat still can pick up some valuable info to apply later on.

Here are five things I’ve gleaned over the years that stuck with me and, at times, have helped me be a better angler.

Persistence and Angles
At the 1998 Bassmaster Classic on High Rock Lake, the first day I was paired with Missouri stick Randy Blaukat. On the ride to the lake that morning he was quiet, contemplating his game plan while using some wire cutters to trim away the head of a jig to make it smaller. That was a clue that revealed itself in greater detail later during the day. 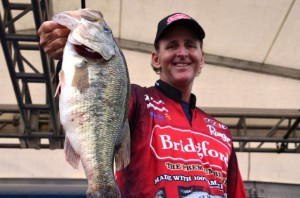 At the ramp, Blaukat tied on the jig. Once we took off, he blitzed his way to a series of backwater canals and creeks to hit specific targets: log jams, downed treetops, a stump or two on a point, and so on. This was back in the old days of the August Classic, so it was hot and sultry in North Carolina.

At one point, Blaukat eased into a spot where a trashy mass of logs and debris had pushed up into a bend of the canal. It was pretty ugly. Didn’t look terribly fishy, to be honest. But between his downsized jig and a small crankbait he made repeated casts at different angles to the logs. A pitch here, a crank there, a crank from a different angle, then another angle, then repeated cast to the same spot before switching to another log or the jig.

Blaukat finished third with 35-2, with the top five all fishing shallow, isolated targets. Denny Brauer, who won, was making multiple casts with a Texas-rigged tube. Persistence and angles pay off. Don’t make a few casts and then move on.

Dissect the Buffet
Veteran Florida pro Bernie Schultz gave me “the look” after I missed the frog bite of what looked to be a pretty darn good bass as we moved along a line of vegetation at Bienville Plantation. 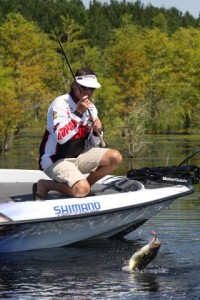 “Can’t believe you missed that one,” he said, and I agreed. Missing those, to me, is akin to chewing tinfoil. I hate it! But I was ready with a Texas-rigged NetBait 15-inch worm and quietly plopped it into the hole left by the bass.

When my line jumped and I set the hook, the proverbial explosion of grass and water was enormous. We estimated it at 8 pounds and proceeded to pick apart the line of grass in the little bend around a point. Deeper water was nearby so it was easy for the bass to move up to feed or get out of the sun and then slide off into the deeper water.

Schultz quickly began hitting specific spots and catching fish. Turns out the bass weren’t just “in the grass.” They were hanging around clumps of floating cabbage, which was thicker and had hairy roots, and we could just about call our shots. For another two hours or so we moved back and forth before crossing the deeper water to the other side and picking it apart, too.

Two takeaways: If you’re fishing around vegetation, have a follow-up lure ready to pitch in if you don’t want to try a frog again. Sometimes a bass will hit a second time. Sometimes they’re finicky but will smack a worm, tube or Beaver-style bait. The other thing is to read what’s going on. Watch for critical keys, like the bass hanging around the cabbage, and then start refining if that proves to be a hot bite. 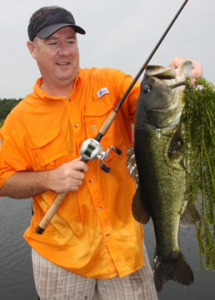 Get Tricky With Them
Alabama veteran Matt Herren laughed when he saw the fry hanging around the stump, the top of which was barely visible. We were in a pocket on the lower end of Guntersville Lake one spring afternoon looking for post-spawners and maybe a few late stragglers on the bed.

“This is going to be easy,” Herren said, and he opened his rod locker. “They can’t stand a floating worm in there.”

Herren explained that a moving bait, like a crankbait or spinnerbait, might draw a strike from a protective bass. They’re usually chasing away bluegills trying to get to the fry. But an unweighted trick worm — the hook helps provide enough weight for it to barely sink — stays in the strike zone longer and ticks off the bass. 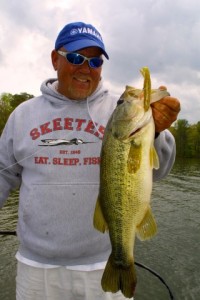 Matt Herren with a Nice Fish – photo by Alan Clemons

Bumping a shallow-running crankbait around post-spawn bass does work, but don’t overlook the old trick worm. White, yellow, neon pink or black … it may not matter. Bass can’t stand ‘em. We also threw Reaction Innovations Skinny Dippers and whacked a few with them, too. Bass don’t like those, either.

Take Time to Recharge
We all get in a rut at some point and just need a break. Whether the bass are giving you fits in tournaments or on fun weekend trips, or you know the bluegills, catfish or perch are on fire, it’s good to take some time to recharge your internal batteries.

Most of us grew up fishing for whatever would bite. Catfish with stinkbait or nightcrawlers, bluegills on crickets, perch and crappie on small jigs, walleye with leeches. And ask any tournament pro if they fish away from the circuit and chances are they’ll talk about a great day they had with friends or family catching something other than bass. It’s a good way to get back to your roots and blow away the cobwebs of bass fishing for a while.

Longtime Bassmaster pro Pete Ponds of Mississippi does this each summer with white bass and spotted bass on Ross Barnett Reservoir near Jackson. He rigs up with topwaters or crankbaits and heads out for steady action while the bite is hot. And when they’re schooling in summer, it can be fast and furious.

Take some time to catch something else and enjoy some fun days. It’s never a bad idea to pick up the spinning rod or cane pole, get some crickets or small jigs, and load the boat with something different. 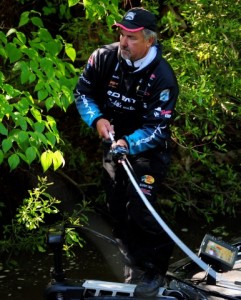 Learn and Don’t Forget
One thing that a touring pro can’t afford to do is agonize for too long over a hard loss, a bass that comes off the hook at the boat, a missed opportunity when he zigs instead of sagging.

A lot of the pros are solid at compartmentalizing a tough moment. It would be tough to pick just one who is better at it than others. That’s something that all touring pros must learn to do and it’s part of the tough learning curve, but is absolutely necessary.

They key, from what I’ve seen with the top guys, is they don’t let a loss eat at their guts to the point of detriment. It weighs on them at the tournament, on the ride home, maybe for a few days. But eventually they have to get over the hump and move on before the next tournament begins. If they carry that grind with them it’ll create self-doubt and can gnaw away at confidence.

Learn from the mistakes, the lost fish, the missed cut. What did you do or not do for that to happen? What could you have done, if anything, to prevent it? Can you make a change before the next day on the water that will help?

Tough moments occur in all sporting events. A missed putt or shank at the U.S. Open, an errant pass in an NBA game, an error that allows a run to score in a baseball game. But the good ones learn from it, remember it, try their darndest to not repeat it and then shake it off.