Frogs in Fall with Chris Lane

11/14/2011 – Fall is the time of the year when shad migrate to the backs of creek arms. When crowds of baitfish move up the rivers, so do schools of bass; these bass can be everything from schoolie sized keepers to healthy fish that will tip the scales quickly. 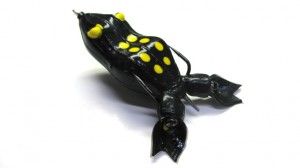 Many anglers choose to weed through piles of fish this time of the year by tossing crankbaits, spinnerbaits lipless crankbaits and soft plastic jerkbaits. An angler can also choose to remain active looking for surface action of bass that are boiling on the clouds of shad that cross paths with bass and flee to the surface looking for safety.

Or, they can do what Elite Series Pro Chris Lane does – look for big bites.
Sure, Lane loves to catch numbers of bass on all types of lures; however, when he is fishing in a tournament, he would rather catch five bass that have grown up to their full potential.

“If I can, I’d rather focus on getting a few of the right bites in a tournament than sort through a bunch of small fish,” said Lane. “I do that by focusing on grass beds looking for bass that feed on bluegill and any shad that wander near the grass beds.”

He relies heavily on his signature Snag Proof Guntersville Frog. Being a native Floridian, who moved to Guntersville, Ala. heavy tackle is his first choice, and he is consumed with the results. 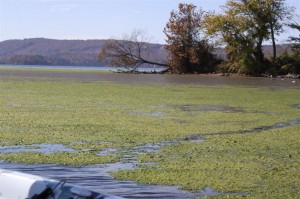 Reading the Grass
From the moment he ventures onto the lake, Lane is looking for signs of life in the grass mats. Even though the water temperature has cooled from its summer highs into the 60’s, the activity level of the creatures around the grass will often be high.

“While bass seek the cooler shade of matted grass in the summer, it’s the opposite as the water cools,” he said. “As the sun comes out, the grass acts as a thermal blanket and it warms the water around it.” This warmer water stirs life and makes the best grass mats obvious.

Lane looks for mats of grass that have basketball sized holes in the mat that is an indication of bass that have been feeding. Along with those telltale signs, when he hears the popping sound of bluegill feeding on bugs and sees the occasional shad struggling on the surface, he usually finds active bass.

Target the Holes
In an attempt to reduce inefficiencies inherent to covering expansive grass mats, Lane said he starts by tossing his frog around the blow holes in the mats. “If there is a visible hole, it means that a bass fed there not long ago, and it may still be there,” he said. “It also means that the mat is thin enough for a bass to get through if it tries to eat the frog.” 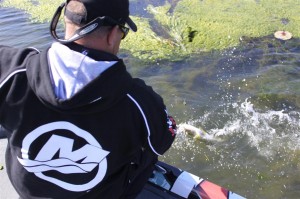 Lane places casts to all four sides of the holes and twitches the frog at a medium pace looking for the bass to give him an idea of the retrieve speed they are going to respond to. If I don’t get any movement, I will slow down first, then try a faster retrieve,” he said. “Once I find out the speed of the retrieve I duplicate that all over the mats.”

His working of individual areas is methodical. He said he often likes to deploy his Power Poles and make multiple casts to specific targets if he sees a lot of action in the mat. He is always ready to hit the swith on his Shallow Water Anchors if he gets a bite but the bass misses. “I can anchor myself in position and make as many casts to the hole without moving,” he said. “If I was moving, I would only get one or two casts, and I’ve caught many of them after dropping my Power Poles and working the area over thoroughly.”

Grass Gear
Because he is tossing around heavy cover, Lane prefers heavy action tackle. His first choice for rods is a 7’2” All Star Series Jig and Worm rod, which he pairs with an Abu Garcia Revo SX reel in 6.4:1 retrieve speed. His line choice is dictated by the kind of cast he makes. He uses Stren Sonic Braid because it is round, and he uses one of two sizes depending on the cast.

“If I can catch them from the middle to the front of the mats, then I choose 50-pound-test Sonic Braid,” he said. “But, If I have to make a long cast to the back of the mat, then I go with 30-pound-test because it is easier to make long casts with the smaller line.” 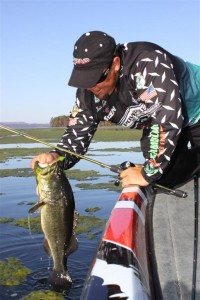 His frog of choice is his Snag Proof Guntersville Frog, and he prefers the black, green or mink color. He said he has no formula for choosing the color, but keeps trying them to see which one the bass will respond to.

Catch More Frog Bass
Lane said that he urges anglers to pay special attention to the lure when a fish blows up on a frog. “There are many times in the fall that a bass will swipe at a frog and miss it,” he said. “If I swing on the boil, that fish will usually not bite again. But, if I wait until I feel the fish pulling on the frog before I set the hook, then I can usually get them to strike again.”