Get Away from it All with Pete Ponds 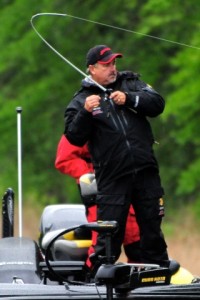 When you are a professional angler, the pressure can be overwhelming.  Of course the pressures of the career is difficult, but in this instance, we’re talking about the amount of pressure that the caliber of anglers that compete on the Bassmaster Elite Series an FLW Tour can put on a fishery.

Nowhere is this more evident than in tournaments from the postspawn period through summer.  When fish begin to congregate on specific types of structure, it’s not unusual to see 10, 15, even 20 boats running the same pattern.

There are days that an angler needs to accept that he will be fishing in a crowd and try to grind out a solid weight and just cash a check.  Those are the days that anglers were not able to locate anything other than that primary pattern.  But, what often separates anglers from the field and gives them an opportunity to place high enough to have a shot at a win is finding something a little different to go along with their mainstay.

Madison, Miss. pro Pete Ponds is a guy who likes to try to get away from it all; and he did just that earlier this year at West Point Lake in Georgia.

When the dust settled on the event, Ponds had managed to pull together a third place finish.  But it was how he got there that makes this story.  Ponds had managed to put together a topwater pattern that colleagues Takahiro Omori and Rick Clunn had also done.  He was throwing a Pop ‘R very slowly, and would get a bite every once in a while, but they were decent.  However, he had a little ace in the hole.

On the first day of practice; early in the day, he heard running water in a pocket that he was fishing.  It intrigued him, so he investigated.  What he found was water in the back of a creek that was creating a little waterfall coming off the bank and current in this creek.  He knew this would be something worth checking in the event.

He looked on Google Earth when he returned to his room and found another small body of water above his pocket that was overflowing its banks thanks to the torrential rains that had been pounding the area.  He knew his pocket would likely have water running all week.

He assumed that his competitors would also locate the area, and when he drew boat number 100 on the first morning of the event, he stayed with his topwater pattern and finished the 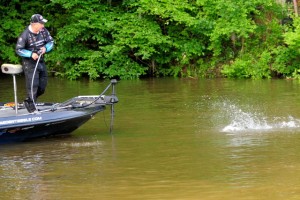 His last boat out from day one meant that he was first boat out on day two, so he went to his spot first.  He was able to catch some key fish in it, elevate his weight by more than four pounds and move into 10th place.  That meant he would get another early boat number because Elite Series officials send anglers out by order of standings after the first cut.

He stopped there again first thing on the third morning, caught a few more key fish and moved up to second place.  Then on the final day, he fished it more thoroughly, and finished third overall.

Looking for Needle in a Haystack
Ponds said that he often looks for these kinds of places on maps, his electronics and the computer as a part of making his game plan.  “These areas are rarely the types of things that can be the only spot during a four day tournament,” said Ponds.  “But, they are the types of places that allows you to have that little something extra that can push you to the top f the leaderboard.”

He also said that they can be anything on a lake that presents something different that will hold fish.  “In this case it was running water in the back of a pocket that created current that wasn’t usually there,” he said.  “But, it could be a unique feature on a ledge, 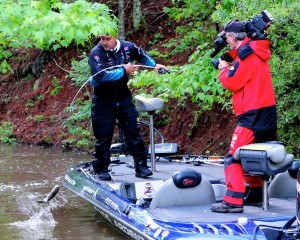 Pete Ponds Swings One Aboard on Camera – photo by Chris Dutton

an isolated set of docks on deeper water or anything else different and isolated that will hold a different caliber of fish.”

He said he scours maps, mapping on his fishfinders and Google Earth, but he also pays attention when he is on the water.  “You can find some of them prior with study and research,” he said.  “But, I’ve found the best one’s by paying attention to my electronics, seeing off the wall things, and obviously by hearing things like I heard at West Point.”

Fishing Away from it All
Once you locate an out of the way spot, Ponds said that an angler needs to be ready to do anything it takes to catch bass.  At West Point, he had eight to ten different Duckett Fishing / Ardent combos on his deck when he started the day, and more underneath the deck of his Ranger Boat.  “By the end of the last day, I could barely move in the boat because I had so many rods on the deck,” he said chuckling.

While he used the Pop ‘R on a 6’10” Duckett Fishing Terry Scroggins White Ice rod with an Ardent Edge Elite Reel and 14-pound-test Vicious Ultimate Copolymer line.  He did most of his damage in his pocket on a  1/2-ounce Talon Fishing Unlimited Shibui spinnerbait on a 7’ medium-heavy Duckett Fishing Micro Magic rod and an Ardent Edge Elite reel spooled with Vicious Pro Elite Fluorocarbon.  He also produced fish from the pocket on a Bandit 200 crankbait, a dropshot rig with a Bruiser Baits Diamond Tail worm and a Bruiser Baits Rad Shad soft jerkbait that he twitched through the current, and his Talon Fishing Unlimited Pete Ponds Finesse Swim Jig.

“You really have to be ready to fish anything and everything,” he said.  “Changing baits after the fish slow down on one thing helps, as does giving the fish a break for a little bit.  I would 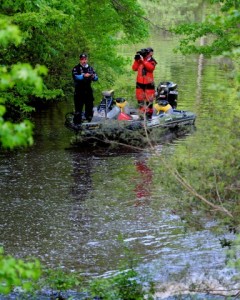 use my Power Poles to hold steady in the current, switch baits, but then also turn around and fish the other side of the boat for a while just to give them time to settle down.”

Protecting the Area
While Ponds only saw on other competitor in the four days he fished the back of his pocket, he strategized to protect it as much as he could while balancing the area’s need for a cooling off period.  “I had to give them a rest, but I really didn’t want to leave it wide open for other anglers to pound on it,” he said.  “On the second day, when another angler came into the area, I eventually just put my Power Poles down and took a break to eat a sandwich so that I could give the fish a break for a little while.  Even though I felt like it was time to back off, I didn’t want to pull off of it, and end up sharing it for the rest of the day – or longer.”

When the other angler missed the first cut, he felt a little more freedom to move around a little bit more, and then on the final day, with only 12 competitors on the lake, he strayed away more frequently.

Final Notes
Ponds suggested that anglers take a chance to look for out of the way things and be prepared to try a variety of lures in order to take advantage of finding those sweet spots.

“Finding them can be a little extra effort, but when you do, it can be worth all of it,” said Ponds.  “It really helped me at West Point, and it can help others finish higher or just catch more fish as well.”