This is the time of the year when the haves and the have nots become distinct.  During the prespawan and through the spawn itself, anglers can run down the bank and pick off quality fish with relative ease.  Don’t be confused, the need to locate concentrations of higher quality bass is still vital; however, the spring of the year allows some anglers to catch random fish that boost their daily weights. 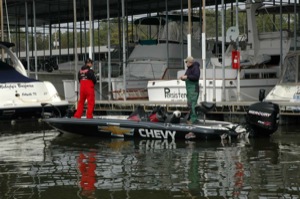 The start of the postspawn is a time when anglers with the skills to locate bass can really dominate the standings.  Postspawn bass tend to be very precise in their positioning and being able to read the water; their electronics and the cover well sets anglers apart. One of those anglers who has shown a true strength for being at his best from the postspawn through the summer is FLW Tour pro Jay Yelas from Corvallis, OR.  The 44-year-old pro has proven his ability to locate quality bass in one of the toughest periods of the year.  Three of his five career B.A.S.S. wins and more than half of his FLW top 1o finishes have come from the postspawn through the summer.

One of the ways that Yelas has been able to capitalize in this period is because of his love for swimming a jig.  “I’ve found that there are times when swimming a jig will out produce other lures,” he said.  “It’s a technique that will work where spinnerbaits or swimbaits usually shine, but it isn’t as off putting as a spinnerbait can be, and works in dirtier water than a swimbait.”

Prime Swim Jig Water
Yelas said that anytime he is faced with dirty water and cover; he has a swim jig tied up and at the ready.  “I really like water with 18 inches or less of visibility for throwing a swim jig,” he said.  “It’s also great spinnerbait water, but fish get conditioned to that really quickly, so turning to a swim jig is a great option.” 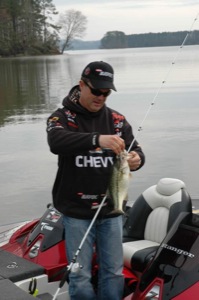 Along with murkiness, Yelas likes to use the jig when there is a lot of cover in the water.  He said that looking at a large shallow flat full of stumps, brush or grass gives him a warm feeling for picking up his Berkley Gripper Jay’s Flippin’ Jig.  “Stumps, laydowns, brush and grass are great flippin’ targets, but when there is a lot of it, swimming a jig is better,” he said.  “By moving the jig through the water I can be more efficient and not waste a lot of time trying to find isolated bass in a field of cover.”

Yelas said to think of the bass being extremely shallow in these conditions.  He said that water that dirty would certainly have them very shallow.

Equipment
The 2002 Bassmaster Classic Champion prefers a stout rod with a fast tip to make precise casts.  His choice for tossing his jig is a 7’ medium heavy Abu Garcia Veritas, especially around cover.  The rod allows him to place deft casts around cover, and because he is not making long casts around heavy cover; chooses a moderate length model.

He prefers a 6.3:1 Abu Garcia Revo STX reel, which he pairs with 30-pound-test Berkley Smoke Fireline.  While many anglers choose braided line or Fluorocarbon; Yelas said the stiffness of Fireline helps keep from fighting wind knots or limp lie tangling around his guides.

Jig Combinations
For most of his applications, Yelas relies on the 3/8-ounce Jay Yelas Flippin’ Jig.  However, he switches to the 5/8-or even the 1/2 –ounce models if he needs to slow roll the jig over submerged grass in 10 feet of water.  “I prefer the swim jig in shallow water, but there are times that it works really well slow rolling over deep milfoil that is topping out well below the surface,” he said.  “The heavier jigs help keep the jig down on top of the grass.” 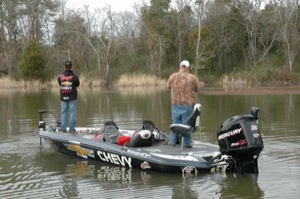 He chooses one of two trailers for the applications; and it relates to how fast he will be swimming his jig.  If he is moving the lure quickly through shallow water, he opts for a 3” Berkley Chigger Craw.  If he needs to slow his jig down; then the new Berkley Havoc “The Deuce” double tail grub is the choice.  “The 3” Chigger Craw has a great flapping action that puts a lot of vibration in the water, and The Havoc Deuce swims at really slow speeds, so it gives the right action in slower conditions.”

He chooses one of three colors for his lures.  In dark water, he likes black and blue, in moderately stained water he turns to his Classic Craw color with a green pumpkin trailer, and when bass are keying on shad, he puts a white skirt and trailer on one of his Gripper Jig heads.

Retrieve
Depending on the water depth, Yelas said that he uses one of two options for retrieving his lures.  In shallow water, he prefers moving his jig along at 3/4-speed while shaking his rod tip to impart a dancing waving action to the lure.  Strikes in this type of technique are likely to be very visible, so he said it is key to make sure that anglers give bass time to take the lure in before setting the hook.

“You can’t set the hook on this lure like you do a spinnerbait; it’s a jig,” he said.  “When you see the strike, you need to drop a little slack to give yourself time to set the hook on the jig, if you set immediately, you’ll miss a lot of fish.” 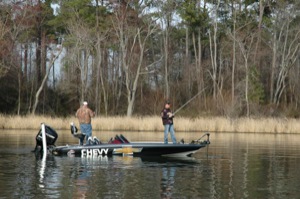 Perspective
Yelas said anglers should think of swim jigs as a tool; much like a golfer does his seven iron.  “Swim jigs don’t get a lot of credit for winning big events,” he said.  “They are a tool; much like the mid irons in a golfer’s bag.  They don’t get the TV time like a driver, or a putter; but they do a lot of the dirty work in the middle of the fairway.”

Yelas said that the jig was instrumental in helping him earn one of his two FLW Tour Angler of the Year titles.  “In 2007 we went to the Potomac River and I was catching good fish in the grass,” he said.  “The conditions changed; we got a really high tide and big winds.  I turned to the swim jig over the tops of the grass, and caught a good limit.  If I didn’t have the swim jig, I wouldn’t have won the Angler of the Year that year.”