West Point and Lake Murray are behind us, and I’m still getting the question; “what’s wrong with Skeet?”

First off, nothing’s wrong with me; everything is fine personally; I’m just having one of those years on the water that things just aren’t going right. I’ve been finding programs and patterns that guys are using to finish high every event, but a few bites here or there that go the wrong way, and next thing you know; you’re at the other end of the leaderboard.

Take West Point for example, I found fish on the laydowns all over the main lake, but there were so few of them on the lake that by the time you got on one of them, you might have been the 10th boat to have hit it that morning.

I had a one to two hour window in the morning at West Point that I could catch them really good on a Lucky Craft G-Splash 80 in Ghost Minnow color. Once that window closed; it was a real grind to catch good ones. My first fish at that tournament was a four pounder, and I thought I was on my way, but things went downhill from there.

Then, at Lake Murray, I got on the soft jerkbait bite that Casey Ashley eventually won the tournament with and on the first morning I had a five pounder, a four pounder and a three pounder eat the bait. I was so full of adrenaline from working the bait so fast that I didn’t give the fish a chance to turn before I set the hook; that I pulled the bait out of their mouths.

I was throwing the bait on my Football Jig / Big Worm rod, a 7.0:1 Victory reel, 15-pound Trilene 100% Fluorocarbon and a 5/0 TroKar TK180, so I should have drilled them; but I didn’t and that’s just the way it goes sometimes in fishing.

Back to West Point for a minute; I had two things that were really neat to be a part of. First was the resort I stayed at; Highland Marina. Denny and Shirley Brauer stayed there, as did Dave Wolak and Pat Golden and my old friend, Alan McGuckin from Dynamic Sponsorships stayed in my cabin for the week.

The cabins were some of the best I’ve ever stayed in at a resort like that, and the view of the lake was amazing. Tammy; the lady who runs the place, really took great care of us, and if you’re looking for a great place to stay for a week at the Lake, you need to give her a call.

The other thing that happened at West point was getting to take Gabe Hawks; a seven-year-old boy who’s fighting Leukemia on stage with me on the second day of the event. His family contacted me through my website and told me about Gabe’s battle and how big of a fan he is. Kim and I sent him some signed stuff, and when his aunt realized we were going to West Point; his home lake, she asked if we could meet up. 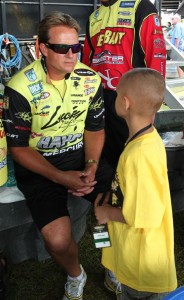 I talked to Steve Bowman and Kyle Carter at B.A.S.S. and they helped me set it up to take him across stage with me. The funny thing is that I actually met Gabe and his dad Lance in practice and didn’t realize it until we met up again backstage.

I was fishing in a cove when I bumped into John Murray and we started talking. Then a father and son came into the cove and the dad pointed to his son and said “Hey Skeet, meet your biggest fan!” and pointed to his son on the back deck. They then asked if I wanted to see the fish he’d caught, and held up a four pounder. I told him great job, and they went on their way; I realized that it was the Hawks when we met up again backstage.

Gabe is a real fighter, and he’s on a maintenance program for his Leukemia; which is now in remission. I know that his battle is tiring, but maybe we lifted his spirits for one day. Thanks to B.A.S.S. for helping put it together, and more importantly; thanks to the Hawks for letting me meet Gabe; he’s a special little boy.

A couple things that I wanted to talk about really quick was that I had a blast rooming with Dave Smith and David Walker at Lake Murray. We had good meals and good conversations. Smith is an amazing businessman, and it was really cool to get a chance to talk to him more than usual.

I also want to wish Steve Kennedy and my Lucky Craft teammate Casey Ashley congratulations for their wins the past two weeks. Both of them were hard fought battles; and they did great jobs. How Kennedy does what he does with such a carefree attitude towards practice; I’ll never know, but he’s a great angler.

Also, my sponsor Wiley X Eyewear sponsored NASCAR driver Matt Kenseth’s car for two races this year; and his black #17 Wiley X car won the Sprint Cup race yesterday at Dover. I’m really excited for Wiley X to have that happen; it’s great exposure for the brand, and I know it must have been a huge thrill for them. They seem to be able to pick a winner here and there; and they make a pretty good product too.

Kim and I are getting ready for an event this weekend that has us pretty busy. I’ll tell you all about it in my blog next week. Sorry for the long winded blog this week, but there’s a lot going on and I just wanted to share it all with you.

Check out more about Skeet Reese at www.skeetreeseinc.com