Most of the country is still in a winter slumber. Sure, we are starting to see extreme prespawn patterns and even sightfishing happening in Florida tournaments, but much f the country is in late winter or very early prespawn mode. What that means is that most of the bass population is either still out on main lake structure, or has just begun the move to the tributaries for the spawn. 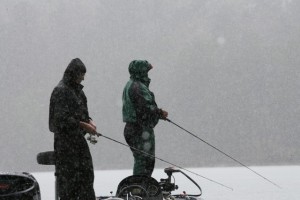 Most of the fishing world thinks about only a few presentations as being the prime fish catchers during this season. Suspending jerkbaits are often written about as a good technique in winter, as are slowly dragging deep water jigs and dropshot rigs fished vertically over fish marked on a graph get their fair share of press. Those are definitely techniques that produce fish day in and day out, but there has to be more to fishing this time of the year.

What other types of techniques can we apply that give anglers a chance to catch better than average bass? How can we separate ourselves from the pack of anglers tossing the same rigs looking for the same sized keepers? The answer is to experiment, and some of the more unique offerings to try are in everyone’s tackleboxes, but they may be saved for other times that they are more known for.

Extreme Response
Because bass are cold blooded and cannot regulate their body temperatures, they are extremely subject to environmental conditions. Cold water conditions can create a lockjaw condition in bass because their bodies are not terribly interested in darting around feeding.

However, because they must eat to survive, a bass will often feed sporadically throughout the winter months. Trying to predict when those feeding periods will occur is nearly impossible, and because most of us spend the majority of our live working our occupations instead of recreating in our avocations; being there when they feed can be like finding the needle in a haystack.

Be of good cheer, just because bass don’t necessarily feed regularly doesn’t mean they can’t be caught in cold weather. You just have to try and stimulate a response that is different than a feeding one; reaction strikes are usually the first one to atttempt.

What is a Reaction Strike?
Most people refer to a “reaction bait” as some sort of moving lure; crankbaits, topwater baits and spinnerbiats often fall into the category. But, an angler can create a reaction strike with a lure that is typically reserved for slow moving approaches simply in the way that the lure is presented.

A reaction strike is generated in a bass when a lure of any type suddenly appears in their strike zone. By making a lure move quickly, a bass has to make a sudden, impulsive move to strike, or let the lure pass by. In times when bass are aggressive, this often means swiftly moving horizontal presentations. But in cold water conditions, it often means swiftly falling vertical presentations.

Fast and Vertical
While the old adage “if the bight gets tight, go light.” is a great starting point for many cold water conditions, it isn’t always the best way to make higher quality bass strike at a lure. Anglers will catch their share of bass on ultralight offerings that fall slowly and subtly in the water column, but giving a larger than average bass a chance to look at a lure is often a great way to keep it from biting.

Heavy Flippin’
One way to get past that in shallow water is to pick up a heavy jig. Lures like the Talon Lures Grass Jig in weights up to one ounce can often trigger strikes when they suddenly appear next to vertical cover. In the wintertime, using a straight tailed-trailer like a creature bait or even a piece of pork is the best choice. The straight tails have less chance of putting bass off in the cold water.

Another critical component of this technique is to present the lure with as little splash as possible to avoid alerting bass to the presence of the lure entering the water. Pitching the lure to standing timber, dock posts and even bluff walls can be excellent ways to trigger strikes. The lure usually gets bit just as it hits bottom or immediately before, so pay attention to your line as the bait falls.

Hoppin’ Lipless
Another technique that is excellent for shallow to medium depth vertical presentations is hopping a lipless crankbait. Lures like a Lucky Craft LV500 are excellent for this approach because it has the profile of a standard 1/2-ounce lipless bait, but weighs closer to 3/4-ounce. This technique allows the angler to cover a lot of water in a hurry, but still presents the lure in a vertical fashion.

Make a long cast with your lipless crankbait along flats or steep creek channel bends that are holding bass and allow the lure to touch down on the bottom. The moment the lure hits bottom, sharply lift your rod tip to an almost vertical position over your head, then allow the lure to fall on a semi slack line.

Strikes will usually come as the lure is falling, so again, watch your line for subtle jumps on the fall. Occasionally, the bass will strike immediately after the lure touches down at the moment you are reeling up the slack to make another hop. When this occurs, you will set the hook as you try to make your next sweeping motion, either way, the fight is on.

Heavy Metal
Next is a vertical jigging spoon. The vertical jigging spoon is a great complement to vertically dropshotting, but can be presented much more quickly than a dropshot rig. Most anglers prefer to use 1/2 to 3/4-ounce lures like a Hopkins Shorty, Kastmaster or a Cordell CC Spoon, but giving them a larger look can improve the size of fsih that strikes.

Bladerunner Tackle produces several large scale spoons, but their 1.75-ounce shad shaped spoon gives a faster fluttering fall that often appeals to the bigger bass in the school. Ripping this larger sized spoon gives off a lot of flash and the wider wobble of it appears to be a larger sized shad that has died off.

There are tricks to making these spoons more effective in presentation, as well as hooking and landing fish. The first is to add a barrel swivel; like a SPRO Power Swivel, in between the main line and the spoon. Monofilament or copolymer line is best for vertically spooning, but having a fluorocarbon leader is great for the technique. Using 20-pound-test main line with a three to four-foot leader of fluorocarbon attached to a barrel swivel reduces line twist tremendously.

Try upsizing the bottom hook on the spoon to a size 1 treble, but you can also increase your hook to land ratio by putting a size 4 treble on the top split ring as well. The fluttering action of the lure will not be affected by this addition, and rarely will the top hook foul, but a lot of times the second hook will swing around and get a secondary hook in the fish during the fight -this often helps land more fish.

Next time you’re on the water and you’re looking for a bigger bite, give one of these a try, it may be just the trick you’ve been searching for.