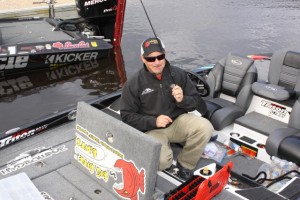 His penchant for fishing “out,” as he calls it, is well known amongst the ranks of his competitors, the media and many fans of the sport.  There are times that the eight-time Bassmaster Classic qualifier seeks a deep bite when the rest of the field is fishing a completely different pattern.

June is the time for big worms, and his signature Kriet Tail comes in a big profile 6-inch version and a large 10-inch model as well. 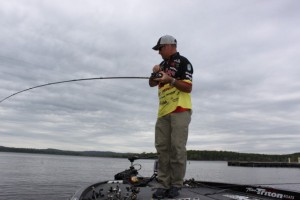 Why the Worm?
Kriet feels that there are a couple of reasons that the big worms draws more strikes from quality fish.  One is because of the shape of the lure, and the other is it is a technique that is underused by anglers looking for the faster bite.

“Big fish seem to like a longer, more slender shape on some occasions,” he said.  “There must be something about it being easier to swallow than a big, bulky lure like a jig.”

He also feels that the one drawback of the big worm plays into his hands.  “This is not a great search bait,” he said.  “This is a lure that you use when you know that bass are there, and a lot of anglers don’t have the patience to fish this type of presentation long enough to get the bigger bites; they’re on to something else.”

Big Worm Setup
Kriet like a rod that has some tip to it for fishing all of his deeper structure presentations.  “I need the rod to be able to load up without the fish feeling it,” he said.  “A lot of anglers use too stiff a rod in deep water, and the miss fish that bite because their rods have no give.”

With that in mind, Kriet selects a 7’4″ Falcon Rods Mike McClelland Heavy Cover Jig Rod.  He pairs that with an Abu Garcia Revo MGX with 7.1:1 retrieve speed spooled with 15 or 20-pound-test Hi-Seas 100% Fluorocarbon line; depending on the cover on the bottom of the lake. 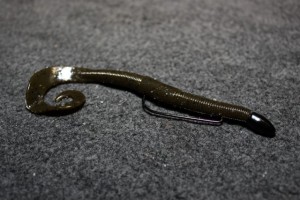 He typically rigs his worm on a 5/0 Lazer TroKar TK100 offset shank, round bend hook.  “Most guys rig their big worms on wide gap style hooks, but I miss more fish on them with big worms,” he said.  “The 5/0 TK100 is perfect for positioning and penetrating with these worms.”

He said he typically starts out with an un-pegged 3/8-ounce Eco Pro Tungsten bullet sinker, then changes up with the mood of the fish.  “When fish are aggressive, I drag the worm around until I contact a brushpile or a rockpile,” he said.  “If they’re not in a feeding mood, then I upsize to 1/2-ounce or bigger and stroke the worm, hopping it off the bottom by a few feet and letting it fall back down.”

Big Worm Colors
Kriet said that he truly favors four colors in his Kriet Tail Worm.  Like most pros, he lets the water color dictate how he makes his color selections.  His four most commonly used colors are Blue Fleck (which he said is modeled after one of the original Blue Fleck worms, so it is a richer, darker shade) a Plum Apple color, Tilapia and Motor Oil.

He said he has distinct times that he uses each.  “The Blue Fleck and Plum Apple colors are best in water that has some stain to it,” he said.  “The Tilapia is best in slightly stained water 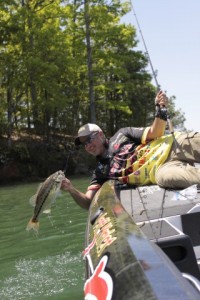 and the Motor oil is used when the water has a little more clarity to it.”

Working the Worm
He said that it is important to find offshore areas that have some additional cover on it.  A brushpile is his favorite, but if there are rockpiles or shellbeds there as a secondary item to hold bass, then he likes that best.  He will often make a long cast and drag the worm back towards him. Then, when he comes across a piece of cover, he shakes an deftly works the lure back through it; many of his strikes come at this point.

His “Stroking” technique is  used when bass become lethargic.  He upsizes his sinker to give the worm a faster fall, then sharply lifts or hops the worm off the bottom three to five feet, then throws slack in the line and lets it fall freely.  He said this kind of retrieve will often trigger inactive bass to strike.

The final tip he offered is to pay attention to the hookset.  While most anglers seem to perform a huge, bone jarring hookset in deep water, Kriet said the there is a more effective way.  “I start to reel the line in until my rd starts to load up and then lean back and pull a taut line to penetrate the hook,” he said.  “This kind of hookset really makes the equipment work for you, and besides, you don’t know, your line could be wrapped around a tree limb or a rock, and you might not get good penetration.

“Use this method and I bet you’ll see better penetration, and more fish landed when throwing big worms.”