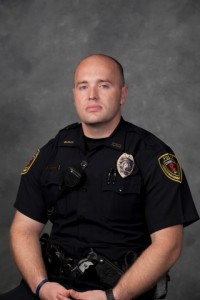 Being a Law Enforcement Officer can be a thankless job. As our country witnessed over this past year, sometimes public safety officials can’t win for losing. No matter if the evidence and investigations prove that you acted in the right protocol, you are still the bad guy.

Then there are the worse days.

Springfield, Mo. P.D. Officer Aaron Pearson, is a 30-year old son of Law Enforcement parents. He followed in their footsteps and became an officer himself. He has received department commendations and event represented the department on an episode of COPS. On that episode, he spoke about how his father told him that “he wouldn’t get rich being a police officer, but that he would love going to work every day, and that it was true.” From all appearances, Officer Pearson is a man who loved his job, and was good at it.

He is also a loving husband and father of two small children, who patrolled the streets with the intent of protecting them, as well as the rest of the citizens of his city.

While responding to a call for backup from an officer seeing suspicious activity behind a business, Officer Pearson was shot in the cheekbone area by a round from a .38 caliber pistol. The gunman, presumed to be a man with several instances of evading arrest and assault on a police officer, had loaded his weapon with critical defense rounds.

The round struck Officer Pearson, and the bullet fragmented; deflecting upward, removing his eye, part of his skull and a portion of his brain.

The worse days had begun. 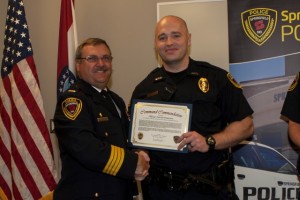 Though he survived his injuries, Officer Pearson has been through emergency surgeries, more surgeries and prolonged rehabilitation involving speech, cognitive and physical therapies. His wife, a nontenured school teacher and their children followed him to Atlanta for the recovery as the bills of a new house piled up while a family supported their patriarch.

Many people stepped up, as did one group in the fishing industry

The Heart of Lew’s
Based in Springfield, Mo. as well, Lew’s is not only the manufacturer of some of the highest quality rods and reels available today, but they are currently the largest manufacturer of single brand fishing tackle in the state. Along with being the largest brand in Missouri, the company, led by its leaders also happen to own one of the biggest hearts anywhere.

Feeling a desire to give back to our military, Lew’s began a program and a launched new series of rods and reels called the American Hero Series. While they donate the American Hero branded equipment to military groups in an effort to get them out being active in the outdoors, a portion of those proceeds go to select military programs that help soldiers after their service.

“While our American Hero program specifically mentions military, I truly feel like our law enforcement officers serve our country and protect our country as well,” said Lynn Reeves, president of Lew’s. “When word of the incident started becoming public, we all felt like we wanted to do something to help.” 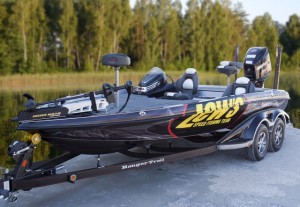 Their reasons were several, but Reeves said one of them was because after the events of Ferguson, Mo., approximately 200 miles from Lew’s corporate headquarters in Springfield, they felt responsible to help officers. “Police Officers get a bad rap in the media so often that we wanted to do something to show we appreciate them,” said Reeves. “This situation with Officer Pearson really left us feeling like we had an obligation to do something to help; especially when we found out that he wasn’t going to be able to work again.”

Reeves, his Field Promotions Manager Mike Eutsler and their team started getting together and discussing ways to get involved. “We discussed running a tournament as a fundraiser for him, but we wanted something more,” said Eutsler. “That’s when the idea was brought up to raffle off the Lew’s Ranger / Mercury bass boat for Officer Pearson.”

So, they contacted the Missouri Fraternal Order of the Police and arranged to have the tickets purchased through them. “We have not, and do not want this to be a Lew’s promotional program,” said Reeves. “This is purely about trying to help Officer Pearson and his family. We really intended to have the wrap removed when Mike Evans of the Fraternal Order of Police thought it would be a good idea to leave it on.” 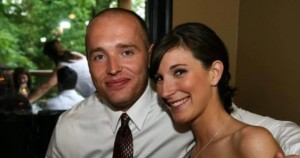 With the raffle prizes now set at a $75,000 Ranger Z520c / Mercury 250 Pro XS tournament ready package with one hour on the motor, a $10,000 day with Parker and a $5,000 day with Christie, along with tackle and gear prize packs donated by a group of industry people connected to Lew’s.

The only thing left to do is the hard work of letting people know about the program. “We’ve worked with the family and the Fraternal Order of Police to leave the donations in their hands,” said Reeves. “This is not about Lew’s, and all donations go directly into a fund for Officer Pearson and his family overseen by the union, and the drawing itself will be handled by an independent firm on June 5, 2015.

“As a company in this city and state, we wanted to help,” said Reeves. “We have a responsibility to try and take care of those who make it safe for us to conduct our lives; Officer Pearson deserved our help.” 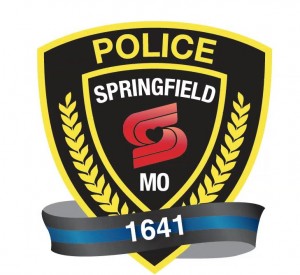 Getting Involved
As for his recovery, According to Lisa Cox, Public Information Officer of Springfield Police Department Officer Pearson is progressing faster and further than many thought he would. “Officer Pearson is able to walk and eat, he remembers his family and though he has difficulties at times getting the words out, he is able to speak and communicate,” said Cox. “He has a long road ahead, but is showing his heart and courage and all of us are offering our prayers and support for him.” There is an informational site setup for information about him at http://www.prayersforpearson.com.