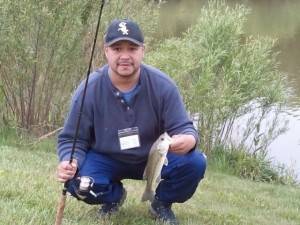 Steve Donis with a Nice Catch

As you look through media coverage in the fishing industry it seems as though the same group of people get 99% of the coverage — corporate brands and professional tour anglers, and that’s not a bad thing; in fact it is a necessity. They are the faces of our industry! However behind each one of those brands or anglers is a team of individual people who help them behind the scenes.

Welcome to “Backstage Perspectives” a new series of features about the people in the fishing industry who don’t normally get the share of the spotlight they deserve. Whether it is a family or support staff member, a person who works behind the scenes at a fishing company or tournament trail, a musical act or celebrity who likes to fish; those are the perspectives this series will feature. It could be anyone else who helps support the sport we all love without wanting or getting any extra love and support for doing so, even though without them the industry as we know it could not exist.

Please enjoy the first feature in the series on AnglerToons founder Steve Donis: 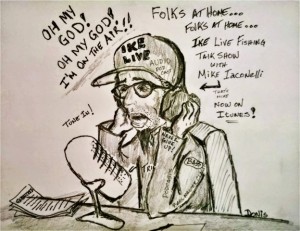 The One that Started it all – Mike Iaconelli on Ike Live

Writers Note: I was first introduced to AnglerToons artist Steve Donis as a regular in the chat box on the #IkeLive web show hosted by Mike Iaconelli and Pete Glusezk. The show has certain fans who consistently participate and before I had even seen a cartoon of his, it was clear Steve was a stand out. Shortly thereafter I came across one of his first drawings on Twitter and have been checking them out regularly ever since.

Mike Ferman (MF) – Tell us a little about yourself…

Steve Donis (SD) My name is Steve Donis, I live outside of Chicago Illinois. Ironically for an artist, I graduated with a degree in finance and still work in that field full time. Although, throughout my school years I took a number of art and architecture classes as well. My teachers always seemed to appreciate my work so my passion for art really grew from there. So, art has been something I’ve been doing on the side for most of my life. I started doing some illustrations for my church and then a local Illinois printing press. 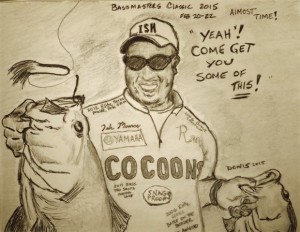 I’ve also always had the passion of bass fishing, and eventually my two biggest passions met when my wife suggested I draw Mike Iaconelli. I did and sent it to him and he loved it. I started doing a few more and he liked those as well. Before I knew it I had requests from a bunch of anglers like Ish Monroe, John Crews, Randy Howell, and others. In November of 2014, I started the Angler Toons Blog and began posting my cartoons to social media and to the blog as well as on the IkeLive web show. Within a short time I was getting comments and interest from all types of people in the fishing community and decided there may be something to this aside from the joy I get from the actual drawing.

(MF) -What led to you choosing to draw fishing cartoons?
(SD) – Just wanting to be a part of the bass angling sport. I know I don’t have the time or the talent to be a really good bass fisherman, so I wanted to invest my talents to help and give back to the sport in the best way I could.

(MF) – Who was the first angler you drew?
(SD) – Mike Iaconelli. One day when watching a tournament on TV, my wife suggested I give drawing him a shot. I did, and sent it to him and he was very responsive. The ball started rolling from there. 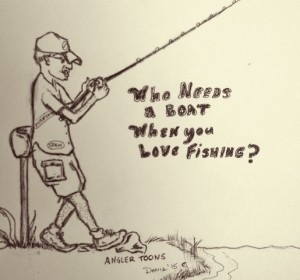 Who Needs a Boat?

(MF) – Who is your favorite angler to draw?
(SD) – It sounds ironic but Mike Iaconelli. You know what it is, you can say whatever you want about the guy but he’s a character. As a fan and an artist he supplies an abundant amount of material from which to draw from.

(MF) – Who has been the most difficult?
(SD) – Anyone with a minimal amount of facial features or personality traits that stand out. Drawing someone like Iaconelli, or Brent Ehler, or Aaron Martens is easy because they each have specific facial features which stand out. Whether it’s Iaconelli’s thin face and facial hair or Brent’s ears some guys are just easier to draw and fit in a cartoon format better than others. With guys without features that stick out to me you have to go searching for something else that sticks out like a situation that occurs, and that is not only less fun but feels less natural.

(MF) – How has the response been from the subjects of your cartoons?
(SD) – People have loved them. I’ve gotten messages from a number of the anglers asking me when I will be drawing them, as well as from each of the anglers I have drawn to date. The fans of my blog and my followers on social media have also been really responsive, I’d like to thank them for all the love and attention they have been giving my artwork. 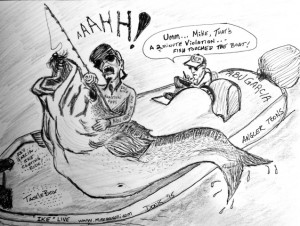 Ike Gets a Penalty – An AnglerToons Perspective

(MF) – Anyone not pleased to be featured?
(SD) Not so far. I’m sure it will happen, but I am not worried about it. I try to do everything in good humor and keep it light and fun.

(MF) – It seems as though you draw what you see around you in the fishing world, and have no fear of poking fun at someone. Is there anything that’s just off limits by proxy?
(SD) – I found it a little hard not to do a cartoon over the “Toho Incident” but I decided not to. One, it was too fresh at the time and the circumstances were unclear. Also, I had just started putting these drawings out there and I wasn’t comfortable poking fun at that subject so soon in the series either. 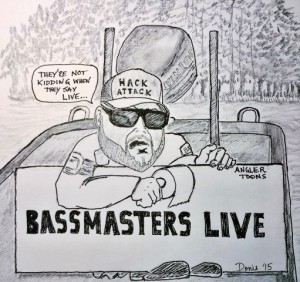 (MF) – What fishing technique do you feel you are best at?
(SD) Jigging. That’s what my friends know me for, throwing a jig. Whether it’s a football jig, a vertical jig, or a worm and a jig head. Chances are if you see me fishing you’ll probably find me with a jig in my hand.

(MF) – What is your favorite thing about fishing or being an angler?
(SD) – The skill that it takes to find the bass. In other words it’s not just throwing the worm in the water, it’s actually the techniques that are involved. I mean skipping jigs, looking for the right temperature, knowing where the fish are at a particular times. Because I feel if you know where the fish are you’re going to catch them. You now it’s not just about being lucky. I do believe good anglers have a lot more to do with catching the fish than just luck.

(MF) – And the Flash 5… Please answer with the first thing that comes to mind.

(MF) If you had to choose ONLY ONE technique or lure to use for eternity… What would it be?
(SD) -A jig! 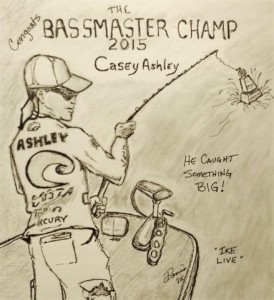 (MF) – If you were going to be stranded on an island with one pro angler who would you want it to be?
(SD) – Mike Iaconelli

(MF) – Finally, is there anyone you’d like to thank or mention?

(SD) – God, for blessing me and giving me the talents I have and for putting people like you and AdvancedAngler.com in place to take note of them. Mike Iaconelli and the other anglers for showing me support and pushing me to continue to do this. And my wife for initially suggesting I give drawing him a shot. I’d also really like to thank all of the fans of my work and my followers on social media. Without any of them I’d probably still be drawing, but it wouldn’t be nearly as enjoyable or fulfilling.