Welcome to the toughest time of the year to fish. 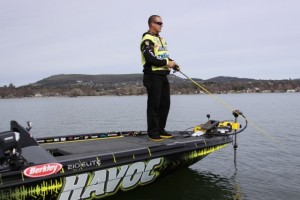 Let’s recap. Springtime is everyone’s favorite time, bass are everywhere, fat and aggressive. Summertime, find them shallow around cover with current or offshore grouped up. Fall, go to the back of the creeks and they are often gorging on shad. Wintertime, locate a school and you can catch them in a hurry.

This time of the year – not so much.

“This time of the year can suck, big time,” said six-time Bassmaster winner Skeet Reese. “Bass are everywhere doing everything, and that can make for tough fishing. But, if you prepare right, this can be a great time of the year to catch fish and even win a tournament.”
Let Reese help you combat scatterbrained bass.

Why Scatterbrained?
Reese said that the main factor for bass being difficult to pattern this time of the year is because the lakes and the climate is in a state of flux. “Everything is changing right now,” he said. “We have summertime days and fall nights and the bass are running around without settling into one pattern or the other.”

The biggest reason he said anglers struggle more this time of the year is because they fail to be ready for what the conditions throw at them. “A lot of everyday anglers spend half of their day wondering what the hell they should be doing and the other half convincing themselves that the fish won’t bite,” he said. “They start the day with excitement, and midway through the day, they have convinced themselves they are wasting time; so they have a bad day.”
Reese said the best way to combat a scatterbrained bass is to be a scatterbrained angler. 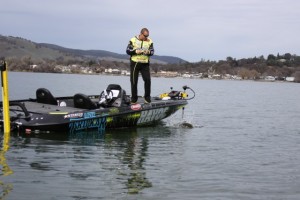 Roll with it!
The 2007 Toyota Tundra Bassmaster Angler of the Year said that he tries not to get disorganized and let the day get away from him this time of the year, but he admits that he has more rods ready than usual right now. I might have between 15 to 20 rods on the deck this time of the year,” he said. “Each of them will have something different for any situation, but that’s because the bass can show up anywhere right now.”

Basically, Reese relies on his ability to remain versatile as an angler, and he relies on his gut instinct to help him go where he thinks the bass might based on a minute to minute reading of the conditions. “This is the time of year to be a junk fisherman,” he said. “It’s also the time of the year that you have to change your focus as an angler from going big, to getting bites.”

Get Bit
While tournaments are won with the heaviest overall weight, this is the time of the year that trophy hunting could get an angler into trouble. “For most o the year I’m looking for something that is going to produce bites from the biggest bass in the lake,” he said. “I’ve won throwing swimbaits on Smith Mountain, and big crankbaits on Guntersville, but I focus on getting feedback this time of the year.”

Reese said he has a specific reason. “Look at tournament standings this time of the year and realize that a lot of anglers blank, or come in with less than their limit,” he said. “If I focus on getting bites, and let the big fish come, I have a better chance of doing well in a tournament. not only that, I also give myself a better chance of having fun on the water if I’m just out for a day of fishing.”

How to be Scatterbrained
For an angler who has as much experience as he does, Reese said the best thing for him to do is have everything at the ready. “I’ll have as many of my signature Wright & McGill Co. rods on the deck as I’m comfortable with to start,” he said. “I’ll also be ready to move quickly and try to get as much feedback from the bass as I can.” 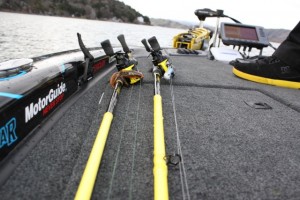 That means he is going to have enough different approaches to cover everything. “I’ll have a Lucky Craft Gunfish 115 for topwater, and Lucky Craft LC 1.5 to 3.5 squarebills depending on the depth. I’ll have a Flipping jig and a football jig ready with Havoc Pit Chunks on them as trailers, I’ll have a 1/2-ounce double willow Redemption Lures spinnerbait, a Havoc Bottom Hopper on a Shaky Head and a Prizm Shad Berkley Handpour on a dropshot rig with a TroKar TK180 Finesse Hook.”

He said he often uses them all in a given day.

“I try to start shallow because that is how I like to fish most,” said Reese. “I hit a spot that looks likely and make a few quick presentations with the topwater and crankbaits and maybe a spinnerbait before fishing the bottom,” he said. “I’ll throw a jig, then the Shaky Head and the dropshot when I feel like it.”

Where to Look
Reese starts his search by following the bass from where they started, to where they are going. “The early transition period will still have bass out on the main lake,” he said. “As the water cools and baitfish begin to migrate more, the bass will move from main lake to secondary points and finally into the creek and river arms.”

Reese has a progression of what to focus on for fish holding structure this time of the year. “When the water is still fairly warm, I look mainly at rocky areas,” he said. “If I find rocks mixed with grass in the early part of the transition, then I’m liable to find bass.”

As the water cools slightly, bass start to turn towards wood. “It seems like the bass start focusing on docks, logs, stumps, brush and laydowns as the grass starts to die off,” he said. “Again, a mixture of rock and wood is a good thing in the middle of the transition, then as the water finally cools off into steady fall, I turn my attention to almost completely wood.”

Of course, the most important component to locating bass is locating the baitfish. “Bait is the most important factor right now,” he said. “When there are bait, there will be some bass. A lot of bait, and you’ll likely find a lot of bass. But, if you look around those types of areas, you should be okay.” 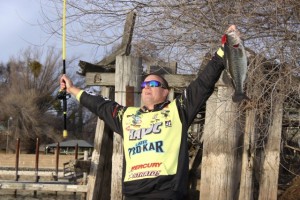 Final Tips
Reese said it is important to be aware and move quickly this time of the year. “Be ready to move when you see something good,” he said. “If you have been sitting in one spot and you haven’t gotten any bites,” it’s time to move. It may not be very far, but keep trying new things until you connect with the fish.

“Get bites and allow yourself to work up to a good bag, don’t overlook the importance of just getting bites,” he said. “One bite could change your whole day, because it could be the clue to what you need to have a great day.”