Live on Top with Ish Monroe 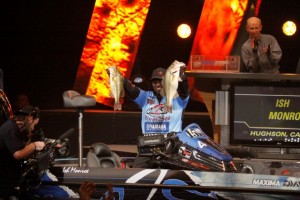 It’s postspawn, except for a few stragglers the bass have all basically finished spawning, and they have moved into their summer patterns. You’ve entered a tournament on your favorite body of water, and all you’ve been able to muster in practice is an average limit. You can continue to produce the same strike with the same techniques, or you can try something else. But, what should you do?

For Bassmaster Elite Series pro Ish Monroe, he said going with a topwater bait is key. “I have a system of topwater baits that allow me to go after bigger bites at any point of the day,” he said. “I have three primary baits that I use, and they all have their place.”

The Hughson, Calif. pro will get himself in the frame of mind that instead of loading the boat with keeper after keeper, he is going to catch five fish. While it may take him all day to do so, he usually has a better than average weight than if he had gone through dozens of fish with another method.

His system is built around being versatile and taking advantage of specific tendencies of groups of bass at this time of the year. He has a lure for early day, low light conditions, one for specific targets and one for heavy cover.

Early Morning
His choice for the early morning is the Rover 128, a nearly six-inch, cigar shaped walking bait. He said he likes this bait for several reasons. “I can cast the Rover a long way and cover a lot of water quickly with it,” he said. “I use it as a first strike lure in low light conditions on main lake structure.”

Monroe said the when the Rover is in his hands, he is trying to take advantage of the early morning shad spawn most of all. Shad will crash main lake points and grass lines and in a frenetic mass begin rolling and boiling as the broadcast their eggs all over the lake bed. This activity is usually finished the moment the un comes up, so moving quickly is key. 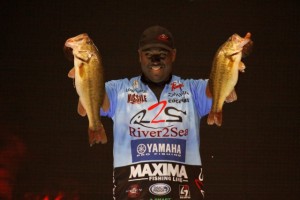 “When I’m using the Rover, I’m covering water looking for schooling fish,” said Monroe. “I look at shallow main lake points and grassbed edges where deep water access intersects with them; that’s where bass feed on shad.” He points to where channel swings connect with a point, or where bluff walls taper off at the end.

He throws his Rover on a 7’7″ medium action Daiwa Tatula cranking action rod matched with a 7.3:1 Tatula reel spooled with 40-pound-test Maxima braided line. He said that he works the bait steadily at a medium clip until bass tell him that they want it faster or slower, but he always keeps the lure moving.

Target Acquired
As the sun rises, and shallow cover objects begin to cast shadows in spawning pockets, Monroe turns his attention to isolated cover in those areas. What he reports he is looking for are those last straggling spawners who are still guarding their fry, along with large bass up looking to take advantage of the bluegill spawn that follows the bass spawn.

His choice for this time is the Bubble Pop 88. This chugger style lure gives him the ability to pop and walk a bait, but he can also fish it in tighter areas, giving the lure a chance to pause between movements. “I really think that a popper imitate a bluegill a lot of the time,” he said. “Whether bass are looking to protect their fry from bluegill, or they are looking to eat bluegill, they respond to this action.

Using the same setup as the Rover, Monroe makes presentations to the shady side of cover objects and walks the bait up to the cover, then pauses for a moment and continues the cadence.

Heavy Cover Topwater
It’s no secret that Monroe loves to throw his signature Snag Proof Phat Frog and Poppin’ Phattie. The two hollow bodied frogs are designed to present a topwater lure over the top of heavy, matted vegetation without hanging the hooks in the weeds. Whether they are fish that have taken up summer residence in the heavy grassbeds adjacent to river channels on places like Lake Guntersville or Kentucky Lake, r they are the fish that live in the shallows year round; Monroe targets them with his frog.

“I make casts across the grass mats and walk the frog all the way to the edge,” he said. “I do it that way until I find the specific area that the bass are using, and then I make casts only to that spot in the mats.” 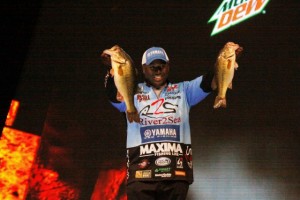 He uses his favorite 7’4″ Daiwa Steez Frog Rod paired with a 7.3:1 Zillion Type R reel and 65-pound-test Maxima braided line. He chooses which version of the frog to throw based on the conditions. if it is relatively calm out, or he is deep in a secluded backwater, he opts for the original Phat Frog. However, if it is windy, or there is a lot of activity on the surface, Monroe turns to the Poppin’ Phattie. He said that he uses a walking retrieve with the frog at all times.

Colors
Monroe said that he tries to keep it simple when selecting colors with his topwaters. “I use a dark bait in low light conditions, and a lighter or translucent lure in higher skies,” he said. “I like Papa Midnight and Sexy Ish for my frog colors, and Loon for lowlight conditions in both the Rover and the Bubble Pop, and You Know It, Abalone Shad or Sooner in light conditions.”

Wrapping Up
One final word of caution from the four-time B.A.S.S winner. “This is not going to be the type of pattern that you will catch bunches of bass on most of the time,” he said. “But, if you stick with it, you are liable to put together a really strong bag that will help you perform well in tournaments, or make for a really fun day on the water as well.”