Last week, Livingston Lures made good on their promise  to fly four of their fans to Oneida Lake to fish with their Elite Series Pros, Brent Chapman, Hank Cherry, Jeff Kriet and Randy Howell.  Brandon Pedigo, Jamieson Heaney and Brent Malone took the time to send us their thoughts about winning the contest, about the fishing day and about what it meant to spend time with the staff of Livingston Lures and their pro staffers.

Below is the write ups from each of the participants in their own words. 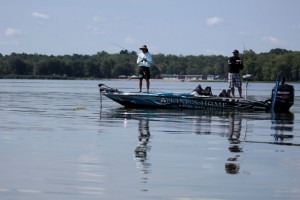 Brent Malone
A chance of a lifetime happened to me this past week by entering in a sweepstakes that no one ever wins.  I will never forget getting the call telling me that I just got a fully paid trip to fish Oneida from Livingston Lures.  The first time I saw Livingston baits was at the Classic this year in Tulsa.  When I saw the technology they had put into their lures it blew my mind.  I then ran into them when the Elite Series was at Bull Shoals and talked to some of their staff that is when I went and like them on Facebook, and man am I glad I did. 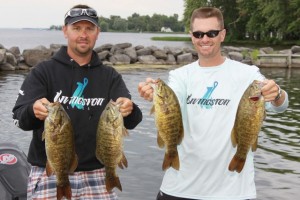 I happened to be the first person there to check into the hotel, and when I was checking in I turned around and Jeff Kriet had showed up early.  I then introduced myself, and he immediately said you want to go out and fish before anyone else gets here.  I was totally shocked thinking that I was just a sweepstakes winner.   He did not have to take me out a day before, I’m sure that was not part of the deal, and he set the pace for the entire trip.  We went out for a few hours and caught around 20 smallies.  I Had a great time with Jeff and he showed me a lot about drop shotting and reading the Lowrance graphs.

I was able to draw and fish with Randy Howell in the little derby we had on the actual fishing day.  I told Randy all I wanted to do is catch smallies, and he put me on them.  I am not sure how many times we both had doubles.  At one time I looked down and there were three to four fish in the bottom of the boat and he was trying to cull them out.  He probably wanted me to stop fishing and help, but I couldn’t.

You put them on a pedestal, and then find out they are just like us they love the sport of fishing.  We would go out for dinner, and tell jokes, pranks, and just have a good time for hours.  I figured we would eat and just go home, but we set and talked for hours.  The entire Livingston family was amazing, and didn’t make us feel like Sweepstake winners but part of their family.   I have never been treated like a King, but can now say that I have.

I want to thank Livingston staff, and all that made this happen for me!!! 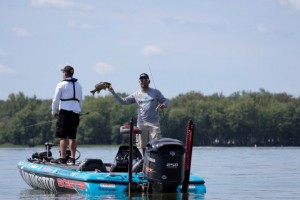 Brandon Pedigo with a Nice Smallie – photo by Dan O’Sullivan

Brandon Pedigo
My fishing trip with Hank Cherry was a truly awesome experience and I will never forget it. To be selected for an event like this is not only a learning experience, but a chance to see how pro fishermen live their lives and how tough it can be. Not only did they take time out of their busy schedules, but they did it thousands of miles away from their families. 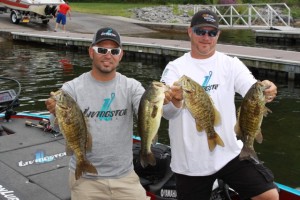 experience. The media team wanted shots of fish catches, celebrations… even interviews about how the trip went and how you caught them.

Hank and I started fishing out for some active schools of smallmouth and finished up froggin’ around mats and grass. Not only did I get to catch what Oneida Lake is famous for, but I got to catch largemouth how anyone in their right mind would want to catch them!

There really is nothing like flying out to a lake you have seen on TV for years and having a pro like Hank Cherry ask you what you want to do. We were treated like kings from beginning to end and everyone wanted to know just as much about you as you wanted to know about everyone else.

Thanks Livingston! I had a blast! 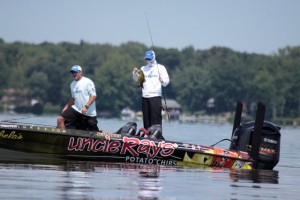 Jamieson Heaney
I would personally like to thank Livingston Lures for the sweepstakes. We all enter sweepstakes, but to actually get a call is amazing .  Having been drawn was good enough for me but to actually get booked for a trip to fish, hang out with, and talk with the companies’ Elite Staff was a honor .

I drew Jeff Kriet. I didn’t know much about him but knew after the dinner drawing not only was there a chance to get some great fish, but I was in for a lot of fun.

The morning ride to the ramp alone was worth it just getting to talk with him and joking around. Game time on the water normally is stressful for me just trying to catch fish. This was so fun I learned in 20 minutes what I needed to learn three years ago . Even though it’s a job to catch fish in a tournament it can still be fun .

Right off the bat I hooked up with a 3 1/2 to 4 pound smallmouth in the first hour.  I was really excited about it because my personal best at that moment was a 2.97. However, I lost that fish right at the boat. 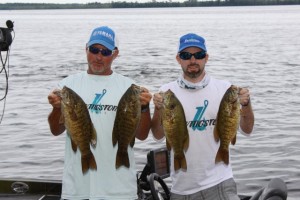 Most that know me would think I almost broke a rod or said a million cuss words, but the only thing I could say was I looked at Mr. Kriet and said “if this is the type of day I’m in for thank you.” About three hours later I got my personal best smallmouth; one just over three and a half pounds.

This experience is still amazing to me. To go from watching guys on TV to being called friends, looking through my phone and seeing pictures taken where we are laughing and smiling.

We all have memories and dreams. Mine go from being eight years old and the first few times fishing with my father and brother. To the start of bass fishing at the age of 9. To the day myself, my father and my brother Shaun went to a lake near Fresno and got over 100 fish in a little less than 5 hours.

Now I have so many more with this trip. You know what’s going on but it feels like a dream that you’re awake for. You see all these guys on the TV and then you’re next to him joking around or you look over to each side of the boats and it feels like you’re looking at your TV on The Bassmasters, but it’s through your own eyes. 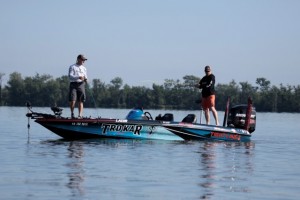 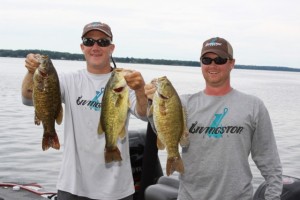