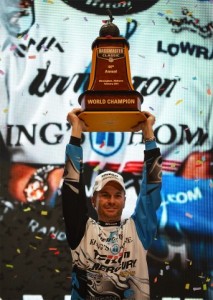 GREENVILLE, S.C. – I don’t really ever make resolutions for New Year’s – I prefer to set goals instead. Looking back at this same time last year, my number one competitive goal was to win the 2104 Bassmaster Classic.

“Check” on that one.

My biggest competitive goal as I head into 2015 is a big one: to be a back-to-back Classic winner. In order to accomplish that goal, I also have “sub-goals” jotted down in my iPhone notes, and the first sub-goal is simply “Work hard in practice in preparation for the Bassmaster Classic.”

So far so good on that one.

I just got back from a week of scouting for the 2015 Bassmaster Classic on Lake Hartwell in South Carolina, and I’m pretty encouraged by what I found there.

Right out of the gate, I knew I had some work to do, because I’d never fished Lake Hartwell before I scouted it just prior to New Year’s Day. The Classic was held there in 2008, but I didn’t qualify for that Classic, so I was pretty anxious to get on the water and start to break the fishery down a little.

My first impression of Hartwell is that I really didn’t realize how big it was. I looked at maps and knew that it had around 900 miles of shoreline, but once I got there and started scouting, I realized that Hartwell might be one of the most productive top-to-bottom fisheries I’ve ever seen. Typically, you can look at a reservoir that big and eliminate a lot of water that won’t be productive. 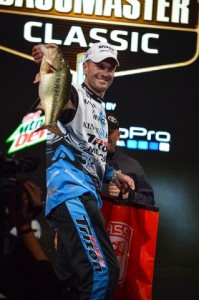 It’s a lot like Lake Guntersville in that it has so much fishable, productive water with a lot of fish in all of it, from one end of the lake to the other. That really makes the Classic anybody’s ballgame, because there are several different patterns that could play big roles in winning that event.

Having a mixed bag of tricks and being versatile are going to be a big deal. If you’re able to fish multiple techniques well, it’ll really show out well at this Classic.

There are some fisheries where you just have to be hard-headed and stick with the jig or the swimbait and just grind on them for four days straight, but I think you’re going to have to mix it up with three of four different techniques to win at Hartwell.

THE CHAMP’S CHOICES: TOP FOUR BAITS
To be honest, I probably only fished for four or five hours total while I scouted Hartwell – I spent most of my time just driving around, making myself familiar with the layout of the lake – but what I found leads me to believe that the following Team Livingston baits are going to be big parts of my gameplan come the Classic:

Howeller DMC: The same bait I won the Classic last year with is going to be HUGE for me this year. The little I fished during scouting, I caught big fish on the Howeller DMC. Hartwell really sets up well for that 6- to 10-foot zone in February, which is perfect for the Howeller, and I caught a 5-plus-pounder on literally my second cast on the second point I stopped on during scouting.

I’m going to have some custom paint jobs done that mimic the look of the blueback herring in the reservoir, but I’m pretty sure the Howeller is going to be a go-to bait. 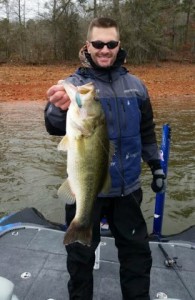 School Master: I’m really excited about this bait in general – I’ve been fishing a homemade version of it for awhile – but the School Master with EBS MultiTouch Technology™ could be a really good option at Hartwell. It’s a slow-falling bait that you can let fall into those schools of fish that suspend over deep trees, and a bait where the MultiTouch™  sound technology will really shine. If that pattern and depth are firing during the Classic, the School Master’s slow-fall action and multiple-sound options could be big players.

Howeller DMC SQ: If it warms up the week of the Classic and fish get shallow, the Howeller DMC SQ could be a big one. That bait vibrates really hard, it darts and digs well, and has a really great, erratic action to it. That bait will probably be my go-to for shallow bank-beating, and I’ll likely throw it in Guntersville Craw. Hartwell has a lot of red clay and crawfish, and the Guntersville Craw color family really seems to be a favorite in February and March for local anglers.

This bait isn’t erratic and fast like the Howeller SQ: it has a really smooth action, and a subtle, tight wobble. The action alone makes it a good cold-water bait, but if fish are keying on that 15- to 20-foot depth, the Deep Impact’s EBS MultiTouch™ sound attraction range is going to make a huge difference.

I’m really looking forward to getting back to Hartwell during Classic week and sort of “dialing in” during our official practice days. I feel like I’ve accomplished one of my sub-goals in preparing hard for the Classic, and am ready to take the next step in accomplishing my big goal for 2015: to raise the Classic trophy again!