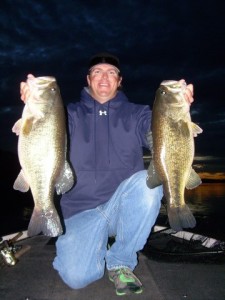 It’s a great way to beat the heat, competition and personal watercraft.

My earliest recollection of any waterborne sporting activity was as a small child when my dad and his buddies took me frog gigging (at night of course) and the fun/terror is still emblazoned in my memory.

There was another time when night fishing for smallmouth bass at Skiatook Lake my rod was literally yanked out of my hands and I immediately dived into the dark water and somehow managed to grasp the reel handle as it plunged into the depths. Kicking toward the surface and cranking the handle at the same time, I wasn’t about the let that whopper get away. Breaking the surface I handed the rod (with bass still attached) to my buddy Glenn Patrick who began to reel, shouting what a great fish it was. Somehow in the confusion of handing over the rod and climbing back into the boat, slack developed in the line and the monster smalljaw got loose. That is a true story!

Other times we’ve bumped unknown objects with the boat that have suddenly splashed water on us; had snakes drop into the boat from overhanging limbs and battled hoards of mosquitoes, gnats and even dodged unlighted drifting boats with passionate lovers onboard while running at full throttle through the inky blackness of a dark lake and moonless sky.

Spotlight connections can pop off while running up a winding channel, bugs get in your eyes and depth perception problems will rear their ugly heads when blackness dominates the fishing world. 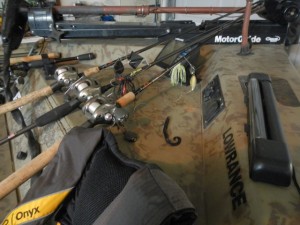 However; despite those dangers, some of the best fishing occurs at night – just ask the guys at the ramp when you’re unloading your boat at sunrise. You know, the scraggly guys who look as if they are in dire need of a hot shower and a big breakfast followed by a long nap.

Or, if you’d prefer, attend a weigh-in following a night bass tournament and check out the lunkers coming to the scales. Either way, it will soon be obvious that if you can overcome your fear of the unknown (and already have a good working knowledge of the lake) learn to fish with a minimum of tackle, purchase a “black light,” spool your reel with fluorescent line and apply some good bug repellent then you too can catch big bass at night.

There are a few critical things to remember:

The primary one is safety first. Always wear a Coast Guard approved life jacket when the big motor is running, and if you are driving the boat, firmly attach the “kill switch” or engine cutoff device to you. Next, have a good spotlight and several backup flashlights. Let someone know where you plan on fishing and when you expect to return.

Next, reduce the clutter in your boat to a minimum before leaving the ramp. That means just a couple of rods and very little tackle. This is not an exploratory mission where you’ll be changing lures every 10 minutes. Most advanced night bass fishermen prefer just the basic lure choices: Topwater, worm or jig and sometimes a big bladed black spinnerbait. Some guys swear by the full moon while others prefer the darkest nights, either way, whenever you can get out on the water is the best time to fish. 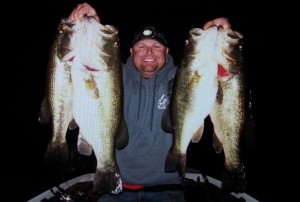 Regardless, get a good ultraviolet light or “blacklight” from a reputable tackle dealer or order one from a good catalog. If you don’t already use “clear blue” fishing line, then spool the reels you plan on using at night with the type of line that lights up under the ultraviolet illumination. I prefer 10 or 12-pound test Stren Clear Blue. You may have another choice.

Tying knots under the blacklight is something you have to see to believe. Even my dad with his slowly failing eyesight has no problem seeing the line when it glows. Then there is the bite. The subtle strike of a fish when the “tap” transmits up the line appears to look similar to a child’s jump rope. Talk about being a “line watcher.” One thing that continues to make me laugh on every night fishing trip is the number of casts that wind up in the trees. If you don’t hear the lure splash, you’re either up on the bank, or squirrel hunting.

Both myself and several fishing buddies thought the lure was really being worked back to the boat with skill and finesses, when all of the sudden we hear a splash and realize the lure has been swinging from an overhanging branch for the last 45 seconds or so.

I’ve also found that big bass tend to go nuts when you turn on a bright light once they are beside the boat. To avoid that, either land the fish with a small flashlight, your stern/anchor light, or go ahead and turn on the spotlight before the fish ever breaks the surface. A good net man is worth his weight in gold on these outings.

One more thing to consider is keeping an eye on the weather. Big thunderstorms with dangerous lightning brew up at sunset and can really ruin a night fishing trip. Graphite fishing rods make excellent lighting rods. 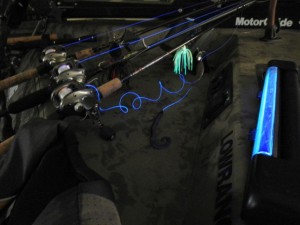 Fish shallow, fish deep or somewhere in between, but the bigger bass do make forage runs out of their deep-water haunts after sunset. Once the daytime fishing pressure, along with boating noise, pushes them deep during the height of the summer recreational season, many anglers think the bass have disappeared from their favorite lakes. The bass are still there, they are still hungry and they will still bite your lure. They just don’t come up in the daylight hours during the summer as they do in the spring and fall.

A lot of anglers will concentrate on docks (especially lighted ones) while others just concentrate on shallow structure. I like night fishing around ornamental waterfalls that cascade back into the lake – when you can find them – or shallow flats and points next to deep water.

Sometimes the rip-rap on bridges and dams are great choices but wherever you fish, always keep a wary eye out for other boaters. Night fishermen tend to be very careful, but big cruisers and runabouts are sometimes piloted by those who may have had a few too many cold beers earlier that evening.

The excitement of landing a big fish which was hooked, fought and landed at night seems to be even better after a long dry spell of daylight fishing trips while battling lines at the ramp, discourteous jetskiers, torturous heat and a million other boats whipping the water to a froth with their lures. It can be risky, but well worth the effort once you pull in a lunker.