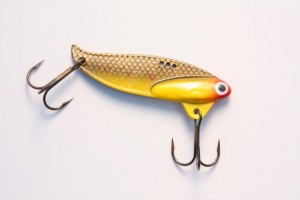 During the late fall, visitors to 13,000-acre Pymatuning Reservoir on the Pennsylvania-Ohio border will observe uniform action being undertaken by anglers fishing from boats. The repeated up and down motion of anglers’ arms gives the appearance of a field of oil pump jacks harmoniously at work. However, rather than oil, these fishermen are looking to strike it rich with golden-hued walleye.

The lure being used is a blade bait – a teardrop shaped metal fin roughly two inches in length with lead molded to the bottom, a treble hook fore and aft, and a line attachment hole on top of the lure. The blade vibrates wildly back and forth when pulled through the water, sending out alluring flash and unique vibes. A wide variety of fish species find this combination of attraction in a small package to be irresistible during the coldwater period. 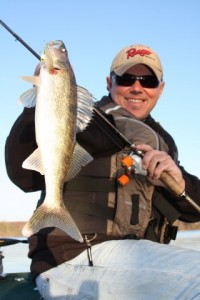 From mid-October until ice up, blade baits account for more walleyes than any other artificial or live bait presentation on Pymatuning Reservoir. Of course Pymatuning isn’t the only lake where anglers enjoy blade bait success. Ten miles down the road on 900-acre Conneaut Lake, late fall fishermen will be observed probing the deep water with blades for schooled white bass feeding on shad. Here the state record white bass was caught on a blade.

From the upper mid-west, across the Great Lakes and mid-Atlantic, and into New England, the simple blade helps anglers achieve their goals of catching walleyes, yellow perch, crappies, black bass and white bass when water temperatures are below 55 degrees.

The first blade bait was introduced more than 50 years ago. Since then a number of similar lures have made an appearance, often with brands limited to small geographic regions. Blades differ slightly in action, flash and harmonics based on the thickness and shape of the blade, as well as placement of the line-tie hole. Walleye – or rather walleye fishermen – seem to prefer a thicker metal blade with a harder thump when pumped. And walleyes (or walleye fishermen) favor painted or prism-tape blades opposed to bare metal finish.

At Pymatuning, the original Heddon Sonar (www.lurenet.com) remains a preferred blade among ‘eye anglers, but of course other blades produce fish as well.

When it comes to presenting a blade to walleye, vertical jigging is employed by the vast majority of anglers in the fall. In part, vertical jigging gets the nod because targeted depths range from 15 to 40 feet, thereby allowing anglers to literally fish on top of the school while watching the action on sonar. Because walleyes will be concentrated in small areas, once a walleye school is located the vertical presentation keeps the lure in the fish zone. Here’s another bit of information to consider: if catching yellow perch or white bass, chances are pretty good that walleyes are also in the general area feeding on the same baitfish.

The yo-yo action of vertical jigging simulates an injured preyfish struggling to right itself and rejoin the baitfish school, but continually falling back to the bottom of the lake. It is an angler-created scenario which predator fish cannot pass up. 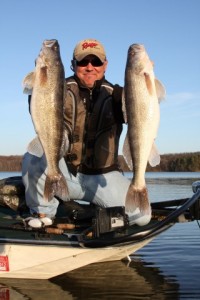 Having a full range of blade weights from 1/4- to 3/4-ounce models will keep you prepared to address all range of depths. Personally, I prefer spinning tackle for fishing blades of ½-ounce or lighter, using a moderately fast taper rod spooled with 12-pound Gamma Polyflex line. Other anglers lean towards baitcasting outfits and may choose fluorocarbon. Braid or superline is a poor choice because some stretch in line is beneficial when vertical jigging.

Before wetting the blade for the first time, here are a few tips on rigging.

Of course it is critical to drop a blade where walleyes are most feeding. You’ve got to find the right fishy spot with your sonar unit. (That’s electronic depthfinder sonar as opposed to a Heddon Sonar blade!) With baseline information on the typical depth of walleyes in the particular lake you are fishing, cruise high profile areas looking for baitfish schools on the sonar. Typical fall locations include points, extended breaklines, channel drops, deep flats adjoining the channel. When the sonar shows something interesting on or near the bottom, it’s time to deploy a blade.

Permit the blade to free-fall to the bottom and engage the reel. Take up slack line so the line is taut between rod tip and lure. Gently sweep the rod tip upward until you feel the blade vibrate. Then slowly lower the lure back to the start point. This gives you a feel for what it takes to activate the particular blade at a particular depth. Now you can begin experimenting to find out how the fish want the blade presented on the given day. First try sweeping the rod tip upward about 12 inches and sitting the lure back down. Then try pumping the lure about 3 feet off the bottom. Or try a harder-but-shorter upward rip. Let the fish tell you how high and how hard to move the bait.

But it’s how you handle the descent of the lure that will reduce tangles and provide the best opportunity to detect a strike. Do not let the bait fall back on slack line after each lift. Instead, ease it down by following the sinking blade with rod tip, watching the entry point where the line disappears at the surface. I call it dropping it on a semi-slack line. That’s a BIG secret to successful blade fishing.

When you feel a tick on descent, see the line jump, or detect resistant when you go to lift the blade, set the hook with a full upward sweep!