One More Day with Dee Thomas 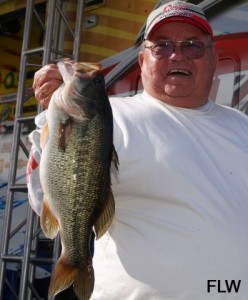 I’m going to admit something. I am a fan of bass fishing.

I am also a fan of history. Some of my favorite things to watch on television are historical shows and documentaries on the History Channel. I love World War II documentaries especially, I just can’t get enough of seeing how our country, and our world for that matter were formed.

While the tournament organizations and the television shows rightfully focus on the hot angler, I tend to enjoy looking back at the history of the game. I love hearing tales of Jack Chancellor and the Carolina Rig, I love hearing how Dick Trask came up with the split shot rig. I love looking at old tournament news and recalling some of the records that have been established over the years.

I’m not as in depth with it as Duke is. He is the unofficial keeper of the history of bass fishing. There is not much that he cannot find in a database or his collection of books, artifacts and records. My true passion for the history lies in the anglers who wrote the tales that we hear now.

Don’t get me wrong, I love the stories that are being written in the record books today. Those results will be part of the narrative of bass fishing history in the future, and I’m fortunate that I get to be here to see it firsthand. I just happen to have a real soft spot for those who paved the way for the rest of us to participate in, or make a living in this sport. 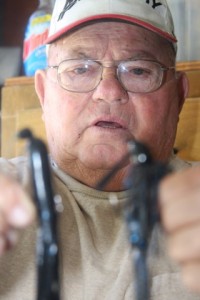 When I was the Field Editor at Bass West USA, I inherited the responsibility of writing our Legends of the Sport articles. These were stories that were designed to bring to memory those anglers who I spoke of before. I wrote them about Kevin VanDam, Denny Brauer, Larry Nixon, Ray Scott, Jimmy Houston, Bill Dance, Gary Klein, Rick Clunn, Roland Martin, Al Lindner and Dee Thomas.

The article with Dee was one of my two favorites because of how real his contributions to the sport have been displayed to me all these years. Being in the industry in California for so many years, and fishing tournaments around him, I got to see how he is as a competitor, and I got to experience how enjoyable he is as a person and a character in the production that is bass fishing.

I roomed with him at an old Western Bass tournament trail pro am that I was there covering, I’ve spent a few days with him on the Delta doing stories about his Flippin’ technique and how to stories. I’ve got nearly two hours of recorded audio interviews from our Legends of the Sport interview that I occasionally go back and listen to as well. I’ve heard the stories from him, I have them in my mind, but it still warms the soul to hear Dee tell them himself.

He knows the whole picture of bass fishing from its infancy to where it is today. He has been there before fishing tournaments crossed over from being a gambling event, to being considered a sporting event. he has lived, created and watched controversies as they unfolded in his now 40 years of fishing competitively. Yes, at 77 years old, Dee still hooks his Ranger up from the garage in his Brentwood, Calif. home and competes in 20 to 25 tournaments a year on the California Delta.

Up until approximately five years ago, Dee would still travel the circuits that went to Clear Lake, Shasta, Oroville and beyond, but the fact that he is on oxygen from emphysema and that costs have gotten so high; he elects to stay to the tidal estuary that has been his home for so many years.

Dee has left his legacy on the sport in the manner of the Flippin’ Stick, the Flippin’ technique, elevated casting decks on bass boats and even the original Trigger Stick concept that became the most popular rod style to this day. He has won more than 70 tournaments in his day from a 1975 Bassmaster Arkansas Invitational to team tournaments on the Delta, and his love of fishing for black bass, and his competitive nature continues to drive him today. In fact, in two team circuits he chose to compete in for 2014, he finished 7th in the Angler of the Year points in the first to conclude, and is currently in second place in the other. 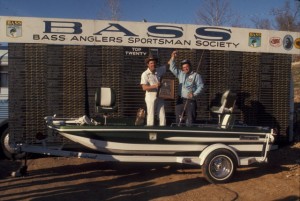 I’ve interviewed Dee several times for stories, but today, with a large transition on the horizon for our family, I just wanted to spend the day with Dee one more time. I took him to breakfast at his favorite breakfast joint; the Brentwood Cafe on California’s Highway 4 and chatted through the meal before heading back to his garage to sit on chairs in the shadow of his Ranger Boat and listen to him tell stories.

We shared jokes, we laughed, he told stories of tournaments gone by with his amazing recall for so many things about his 40 year journey as a competitive angler, and I just soaked it all in. No interviews, no conversations directed at getting quotes for articles; just a guy, sitting there soaking in a living legend.

I personally owe more than a nod to the man. His career is one of the many who pioneered an industry in which I a fortunate to make my living. I too cover the occurrences that are in the now, but I will never forget to look back at the history our sport has so richly earned. I owe the sport and its anglers; both historical and current my respect for their struggle, their dedication and their accomplishments.

I went to Brentwood today not to construct a piece to publish one more day on a website or in a magazine; but to spend one more day with Dee. I may at some point publish the interviews I did for our Legends of the Sort piece in 2009 as a historical record. But, today I let the recorder in my pocket and just merely spent that one more day with Dee; a day I will forever cherish.

Thank you Dee, for your contributions, yes. But, most importantly for always taking the time to share a little bit of what makes you who you are. I’m grateful for each and every “One More Day with Dee” I’ve had.