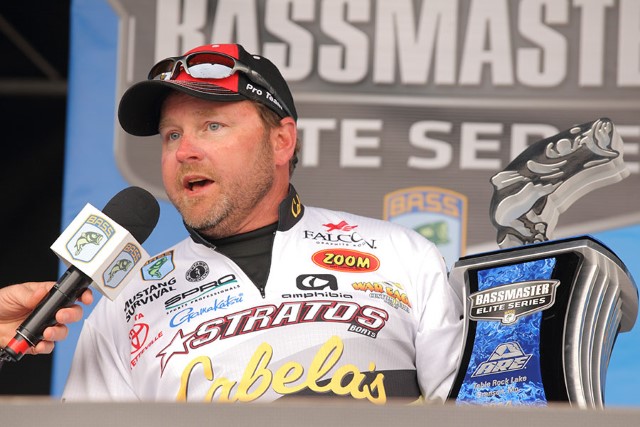 “Considering the competition is better now than it’s ever been, any year you win a Bassmaster Elite tournament you have to walk away feeling good with the way you fished,” McClelland said. “This year was even more special due to the simple fact there were essentially only eight winners.

“I was even happier to double qualify for my 10th trip to the GEICO Bassmaster Classic, one of the most prestigious events and titles an angler can win other than Angler of the Year. Winning and finishing as high as I did in the points feels pretty darn good.”

Already locked into the 2015 Bassmaster Classic with his Table Rock Lake win, McClelland made sure he qualified on points as well by earning the 26th overall slot in the 2014 Angler of the Year standings. McClelland says his ability to rescue himself in tournaments that didn’t start off the way he would have liked was the difference.

“As hard as it is to grasp, the last two events of the year leading into the Angler of the Year championship were really big for me,” McClelland said. “The Delaware River was one of those events where I had a miserable first day but was able to rebound on Day 2 and bring in a solid stringer that moved me up more than 30 places in points. That was a big deal and it gave me momentum going into the final regular-season event on Cayuga Lake, where I finished 13th, gaining the most points I could gain without fishing the final day of the tournament.

“Aside from my win at Table Rock Lake, those were really big events for me. A stumble at either of those last tournaments could have kept me from double qualifying with the Angler of the Year points.”

Capturing his seventh career win and overcoming tournament woes, McClelland proved his focus was on the bigger picture.

“I think this season was one of redemption,” McClelland said. “I had a couple of first days through the course of the season that really could have wrecked the entire year, but I was able to overcome in those situations. Even if I didn’t draw a check at one or two of those events, I still made a big turnaround and gained a lot of valuable points.

“I probably could have ended up higher in points. Any time you win an event and you get that full 100 points from one event, you hope that helps you finish a bit stronger in the Angler of the Year standings than I ended up being. But as a whole with winning an event, double qualifying, and everything else, this season was really positive. It was a success any way you look at it.”