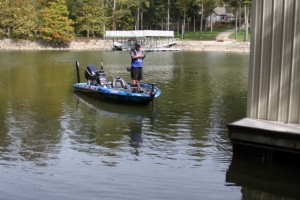 Once bass enter the late prespawn, and they begin to set up to find their actual spawning areas, there are few better pieces of cover for locating and catching them than a dock. From that point on thorough the summer, docks; depending on the body of water, can be prime cover.

Even on lakes where the ledge bite is the winning program, an angler who begins to feel claustrophobic fishing in tight quarters can typically find enough bass on the docks to be competitive. The key is locating the right docks in the right locations, but once that task is accomplished, there can be a motherlode of fish there.

One of the best at picking docks apart has always been Denny Brauer, the legendary professional angler from Del Rio, Tex. In fact, in all the history of professional bass fishing, there may not be anyone better at dock fishing.

Brauer took the time to share some of his years of experience with us.

What Docks to Look For
Brauer said not all docks are created equal, but it’s not all about the actual dock. “A lot of it depends on the time of the year, and I really start with looking around the dock,” he said. “I start by looking at the composition of the lake bed and where the docks are positioned; that’s how I start to find the right docks.”

If he is in the fall or spring, then he looks in the middle to the back of the creeks, and the summer and winter, those on the main lake and points often get the most play. “You have to keep the season and situational patterns in mind,” he said. “If the bottom composition and location are correct, then adding a dock to the mix is only going to make it better.”

Brauer prefers permanent docks to floating docks most of the time, but says that floating versions can hold bass. “The great thing about a pole dock is that their construction gives the bass something to relate to from top to bottom,” he said. “The bass can hood on the poles anywhere, so it gives them more to relate to.”

If there are only floating docks available, he prefers to look for the oldest models. “Those that have Styrofoam floats are best because they collect more algae on the floats for baitfish to feed on,” he said. “But, those are being replaced with plastic, enclosed flotation, and those will hold bass too.” In the case of floating docks, bass tend to suspend under them.

Once he establishes the location, he starts to look for docks that have obvious signs of fishing around them. “If I see a dock with a crappie boat stored there, or there are minnow buckets, or lights, then I know it’s a fisherman’s dock, and I’ll start there,” he said. “Then, I’ll also look for the more complex docks with the most cross members and walkways because they have the most areas for the bass to hold on.” 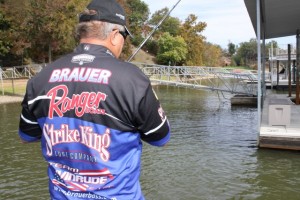 Targeting a Dock
While common knowledge of the day in Flippin’ and Pitchin’ is to work quickly and make individual presentations to obvious points of the cover to start to locate the fish, Brauer said dock fishing much be more methodical at first. “I’ve watched people go through docks hitting only a few spots on it,” he said. “The truth is that when you first start fishing docks for a day, you need to fish the whole thing.”

He said the only way to begin to put the puzzle together is to hit each post and pay attention to what the fish are telling you. “They might be on the back posts, the deep posts, the shady side, the sunny side or event suspended under walkways, or even the swim ladders” he said. “Until you fish everything, you won’t be able to decipher where they are holding that day. After a couple of bites, you can start to figure that out, and really put it together.”

Then, it’s all about figuring out the lure and retrieve that will get them fired up.

Dock Lures and Retrieves
If he finds that bass are suspended, then Brauer said he prefers a 3/8-ounce Strike King Denny Brauer Premier Pro Model Jig. The trailer depends on the speed of the fall he wants. “If they are responding to a faster fall, then a Denny Brauer Chunk or a Menace Grub are what I go to,” he said. “If I want to slow it down, then a Rage Craw or even the new Rage DB Craw will be good. The Rage Craw itself will be the slowest fall in that case.” If they are responding to a faster fall, then he will often upsize to a 1/2-ounce Premier Pro Model with his trailer of choice.

If the fish are in cover under the dick, or they are not responding to the bulkier jig presentations, then he will switch to soft plastics. “I will rig a 3/8-ounce Tour Grade Tungsten weight – most of the time – with a Mustad Grip Pin Flippin’ Hook and rig it with plastics,” he said. “The Rodent, Rage Tail Shellcracker, the Rage Craw, Rage DB Craw or even the 4.5” Denny Brauer Pro Model Flippin’ Tube are good.”

He said that me begins by making his presentation to the dock and lets the lure fall on a clack line to make sure it falls straight down. He will then work the lure by shaking it for a moment, then make the next presentation. “That’s my standard presentation, but if I don’t get bit, then I have to experiment,” he said. “It can be anything from letting it soak to jumping it off the bottom; you just have to let the fish tell you what they will respond to.”

Gear
He doesn’t use just one setup for dock fishing. His first choice is always his 7’6” Ardent Denny Brauer heavy action Flippin’ Stick with an Ardent F-700 Denny Brauer Flippin’ Reel spooleds with 25-pound-test Seaguar Tatsu Fluorocarbon line. He makes adjustments from there depending on the lure and technique.

“If I need to scale down, then I’ll go to my medium-heavy Flippin’ rod and the same reel, but I’ll have to scale down the line too,” he said. “I will rarely go below the 15-pound-test Tatsu, even though it’s really strong line, because there is usually a lot of nasty cover that can break you off.” 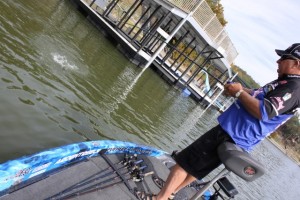 Final Thoughts
Brauer said that paying attention to things is how an angler can have the best success around docks. “It only takes two or three bites to let you know what the fish are doing,” he said. “If they take it on the fall, on the bottom, on the inside posts, outside posts. Al of those things can help you figure out the puzzle pretty quickly.”