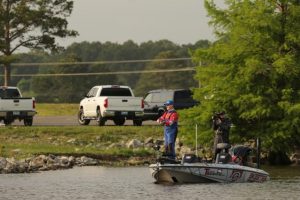 At a recent boat dealership open house, the dealership had a sale of old tackle and boating equipment. An Elite Angler that was on hand to do seminars at the event was quietly gathering tricks of the trade for a quarter per bait.

Altogether, he spent a grand total of around five dollars in old, rusty out of production lures. These are baits that he will clean, replace hooks, and even have repainted to go to war on tour. A walk around a yard sale, the sale box at a boat show, and EBay are all great avenues for finding “diamonds in the rough” for our tackle boxes.

Every angler has a favorite technique that they feel gives them an advantage over the other fishermen, and the right lures go a long way in to finding this nirvana. Was it the lure or the angler being in the right place at the right time? It does not seem to matter as the memory feeds to the excitement the next time an angler is in a similar situation. All fishermen are basic hoarders when it comes to tackle anyway, and we are on the perpetual search for that perfect bait!

Technological advances in soft plastics have kept the angler trying new shapes and styles. The old plastisol baits did not weather time very well, but manufacturers have more flavors and colors than one can imagine these days, and this has placed a decline on many anglers looking for old plastic worms.

Jig heads have also evolved to a technical science. The most drastic change in the last twenty-five years of jig production is the quality of the jig hook. Chemically sharpened hooks are deadly when it comes to penetrating 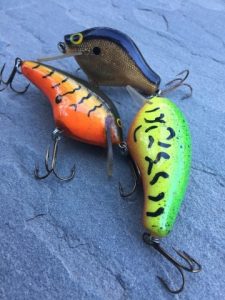 the mouth of a bass.  Many “niche” oriented jig styles have been developed for a specific purpose and as a result, anglers can find exactly the jig head they require relatively easily.

Spinnerbait and buzzbait styles have not changed much, but the new hooks have raised the bar in this category as well for efficiency of the techniques.

Crankbaits are all the rage when it comes to antiquities in the tackle box. The search for specific makes and models seems to be on the rise. They are becoming harder to find, and therefore, worth the effort.

Balsa wood lures were popular in the late 1960’s to early 1970’s because his type of wood produces an extremely lively action with high flotation. The first “squarebill” was the Big O. This bait was produced by Fred Young in Tennessee. He named the bait after his brother Otis.

The Big O became very popular after it received exposure in the 1972 Bassmaster Classic. This was not the winning lure, but it was featured in a Sports Illustrated article about the event. The lure became so popular along the Bassmaster Trail; it was being rented for up to $25 per day. This was the catalyst for the balsa movement as manufacturers produced thousands of balsa wood baits. Some of those old wooden lures are in great demand from collectors and anglers alike.

The squarebill family of lures is coveted for their action and high floating characteristics. They deflect and crash cover like very few crankbaits. There is a certain “romance” with these baits as no two balsa baits are exactly alike in action. Look in to a shallow water specialist tackle box and you are guaranteed to find this bait in their tackle. Strike King worked very hard to mimic these random actions in constructing the KVD series of squarebills. 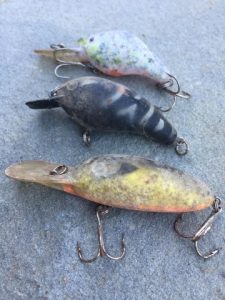 Strike King Psycho Scout with chalky aged surface denotes a lure made with Butyrate in the foreground. These characteristics are what to look for at a yard sale

East Tennessee is a great resource for finding handmade or “home mades,” as they are known. Many very popular styles of crankbaits have their roots near the Knoxville, Tenn. area. The Tennessee Shad, Little Petey, and Tennessee Tuffy are all wiggle and depth specific lures.

They come in several different configurations. Coffin bills and flat sided baits abound in the Smokey Mountains of Tennessee. A fantastic place to find these baits is the East Tennessee Fishing Show in Knoxville. This boating and tackle event will have “home mades” craftsmen lining the show walls with booths. Anglers can find most any style and age lure at this annual sport show. Antique lure shows can be an additional source to locate specific baits.

Mass produced plastic lures have their fans as well. The 1970’s through the early 1980’s had a class of lures that had specific traits that cannot be found in other lures. This is from the plastic that was used at that time. Butyrate plastic is a very dense material and this material owns a very distinctive sound when rattles are placed in to the lure. As this material ages, it has a distinctive “dirty sneaker” smell to it. These lures may also have a “chalky” appearance to it as well.

Lures like the Psycho Scout, the Wiggle Wart, the Wee R and the Hellcat were made of this type of plastic. Anglers that frequently fish the White River chain of lakes will say, “a bait made of any other material than Butyrate is not worthy of a ride in my boat.” The sound of the low pitched rattle of lead against the side of Butyrate baits will out fish most all others in a crankbait according to these anglers.

Here are some tips for discovering old lures

In today’s market, Hooks are very geometrically shaped. Anglers will find smooth round bend or EWG (Extra Wide Gap) hooks on most baits. These hooks will most likely be chemically sharpened hooks. This will date a lure as an early 1990 edition lure. Hooks with curved tips are an indication of age of a lure. Smaller sized hooks will also tip an angler to the age of an 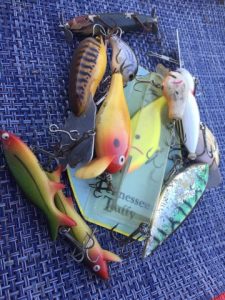 Crankbait bills that are opaque and have copper, soft wire or twisted wire in the as line ties will depict a hand or “home made” style bait. Computer chip board bills are also very common on Smokey Mountain area baits.

Lures that have glass eyes on them could be real collectors’ items. The glass eyes may suggest a pre-1950’s model lure. Refer to collector books as a resource or antique lure collecting websites for more information.

So, the next time your significant other says, “Honey, let’s go to the yard sale.” She may be surprised when you agree. Your reward may be waiting with a fifty cent price tag on it.