Pro Tip – Kevin Short – I Gotta Have my Stuff 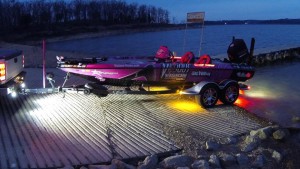 For a Throwback Thursday, we revisit a column that Mayflower, Ark. pro Kevin Short did for me in my Bass West USA days on the topic of our stuff.   I choose this because I can relate as I am in the process of trying to organize my own fishing stuff that I allowed to explode like a pack of Mentos in a bottle of Coke.

In his typical, irreverent and humorous style KPink talks about how much stuff he stuffs into his BassCat boat for a fishing day, and he’s talking about a one day couples event with his wife Kerry, otherwise known as K2

How many of us are guilty of packing too much “stuff” in our boats? Crankbaits, spinnerbaits, swimbaits, jigs, frogs, topwater, rubber worms, rubber lizards, tungsten weights, hooks; the list is almost endless. Bass fishermen have to have a lot of “stuff,” don’t we? 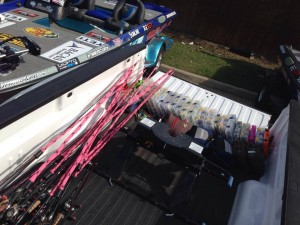 This revelation in the world of quantum piscatorial “stuff” came as I was loading the BassCat for a weekend tournament that the wife and I were fishing. Not a high dollar affair, by any means, just a little one day, 25 boat, couples derby that we get to fish on the rare occasion that we’re home and the schedules line up.

I really wasn’t paying too much attention until I wanted to add one more box of crankbaits but didn’t have room. Did you hear what I said? I didn’t have room to put one more 3700 box in the front compartments. Have you seen the storage in a BassCat? There’s a lot of space in there, and I had mine crammed full of “stuff.” It almost made my Costa’s fly off my face in surprise.

I counted 48 boxes of different sizes in the front three storage compartments containing various crankbaits, Zoom plastics and Jewel jigs. More “stuff” in the rod box on the starboard side, and more in the storage behind the seat. I remember thinking at the time “This is crazy. How much does this “stuff” weigh?” I went to get the scales, and would you believe 150 pounds?

I had the equivalent of a full grown man stashed in the front of the BassCat. That didn’t include the weight of my Lew’s rod and reel combos (another 15 pounds), the spare MotorGuide (another 27 pounds) in the starboard rod box along with the anchor, and enough Vicious fishing line to spool half the field for a day. Again, did I really need all this “stuff”? 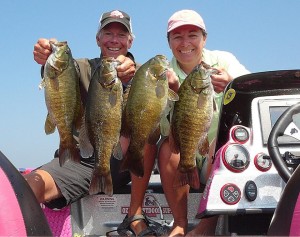 Kevin and Kerry Short with Some Nice Smallmouth

Did I really need to carry 46 DD22’s stuffed in that 3730 with the lid that would barely latch? Maybe I could just carry one of each color I felt I would need in the boat and the rest in the truck. What if I lost the one I was using? Oh, the dilemma of tackle selection.

It’s like a drug – a guy’s gotta have his “stuff” with him at all times. Don’t leave home without your “stuff”. I gambled on one of each color and as it turned out, we never even threw a DD22. But I had them, just in case the deep crankin’ bite was on.

Flipping through some of the boxes, I was surprised at how many of the baits I had never thrown. I haul many of them from coast to coast and border to border chasing little green fish and they never leave the comforts of the plastic boxes where they reside. I seem to catch fish everywhere we visit on the Elite Series trail with the same handful of baits that would probably all fit in eight boxes instead of 48. I still buy new baits, stuff the compartments of the BassCat full, and lug around way too much “stuff”.

Maybe I need to thin out some of the “stuff” and get down to the basics of what I know I need to have in the boat for every day on the water. That might not be such a good idea, as I’ll probably need a bigger boat to hold all the “stuff” I think I’ll need.

In case you’re wondering, Kerry and I caught all our fish in the derby on four different crankbaits on four different rods. We could have left everything else on the bank and shaved 146 pounds of weight off the boat and been nicer to my Mercury Pro XS – I just gotta have that “stuff” though, man!