Researching a New Lake with Technology 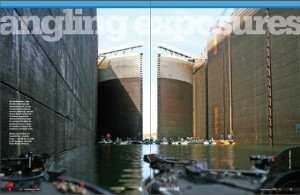 Let’s set up a hypothetical situation.

Imagine that you are fishing a circuit, and your goal is to try and qualify for the championship. It’s one of those types of trails that you find out the location of the year-end championship towards the end of the season. You fish well enough to make the championship event, and are in position to make it when the announcement of the location is announced.

It’s on a lake you’ve never fished before. In fact, it’s on a part of the state you’ve never even been to. The tournament organization threw a fair competition wrinkle into the program and decided they wanted to remove any home field advantages and put it somewhere that the field would not know to “level the playing field.”

That is one scenario. The other is that you fish a regional division of a national circuit and qualify for the championship on a body of water in another state. What do you do to learn as much as you can to try and be competitive?

Assuming that you don’t have any of the world class touring pros on speed dial that owe you a favor; the answer is to turn to the Internet to begin learning as much about the fishery as you can.

I was talking to my friend and AdvancedAngler Senior Writer Rob Lever about this the other day. Lever qualified for a slot into the B.A.S.S Nation State Championship for Massachusetts and it was on a lake he’s not been to. It reminded me of a few years ago when I qualified for the B.A.S.S. Nation State Team, and we were going to fish the Columbia River in Washington and Oregon.

The first thing I did was contact Skeet Reese and John Murray.

I know what you’re thinking, I asked them for spots and baits. If you thought that, you’d be wrong. You see, I believe in learning how to locate fish and catch them rather than merely getting a waypoint and catching someone else’s fish. The problem with being handed fish, is that if they move from the spot you were given, then you don’t have any basis for relocating them.

What I asked Reese and Murray was how to research a lake that I’d never been to; they gave me some advice. It included map study and Internet Research.

Tools to Acquire
I bought a pair of maps of the Columbia River, and the Navionics chip for the region, and then I started researching on the Internet for fishing reports sites and forums that had good, current information on the river. The next thing I did was install the Navionics app on my computer, and install Google Earth on my computer as well.

While I had the Navionics app on the computer, I wanted the paper maps so that I could mark it up with a pen and keep track of some of the things I needed to remember and coordinate between map and my chart on my fishfinders.

Research
I found two or three forums where anglers would discuss fishing in the area. Actually, one was an Oregon forum and one was a Washington forum, but they both gave me information I could use in my planning. I wasn’t so much looking for specific locations, but rather looking for as much information as I could find about specific patterns during that the of the year that would help me identify the kinds of lures and tackle I would need to pack as well as the types of structure and areas I would be looking for when I got there.

I opened a Word Document and began taking notes in there as I found something of interest for that particular time frame. I kept pattern notes in there. Things about water temperature, water levels, basic pattern details and some notes about lure colors and sizes so that I could aid in the selecting of lures and terminal tackle.

At one point, I found a website that not only had some videos of some local anglers fishing for a television show that I could watch, but it also included GPS coordinates, so I could later put them into Google Earth and examine the type of cover they were fishing, and then also compare to the topographical maps of the area.

Once I located all of the basic information, I started keeping track of the weather a little more and looking at the water levels and trends some more as the event drew near. Once the event was a month away, I was checking weather conditions and water flows each day for a few minutes and putting small time in each day packing tackle so that I wouldn’t have the long, all nighters in the final two days before we left.

Finally Made a Call
After I had done exhaustive amounts of my own research, I finally – again, after researching as much as I could on my own – called an outdoor writer friend of mine who lived in the area and was a tournament angler as well to run my thoughts by him and see if I had the right view on things.

He assured my thoughts on some items were accurate, and added a couple of other things that I had not considered, but mainly, he showed me areas to be careful navigating in. 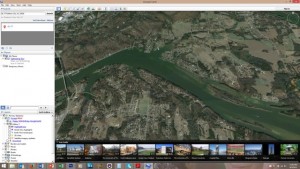 Google Earth of Lake Neely Henry on the Coosa River

Wrapping Up
I did not do well in the tournament. I located an area that had tremendous smallmouth in it that I was able to get strikes fishing a lipless crankbait, and my practice partner and I caught several quality smallmouth in, including those in the three to four pound category. The area would be a total of a 65 mile run and a lock through to the Oregon side of the river.

However, on the eve of the first day of the tournament, a cold front blew through and pushed sub 50 degree water into the slough and the fish became finicky. I got three strikes on my lipless cranks, but they all just pushed the bait with a closed mouth; I did not catch any of them. I adjusted and tried to find some fish that would bite finesse tactics, but didn’t find any that cooperated. – I zeroed the first day.

Day two of the tournament was cancelled due to extreme weather and on day three, I ran to the lock, but stayed on the upriver side of it. I only managed to catch one keeper, and finished 147th in the tournament. Those were certainly not the results I was hoping for, but I learned a lot about preparing for events, and how to research things on my own.

I failed on my own, but had I been successful, I would have succeeded largely on my own. Most importantly, I learned something about map research and finding some fish I could be competitive by myself.

These tips can even help us locate new areas on lakes that we have fished for many years.