Rick Clunn and His Topwater Rico 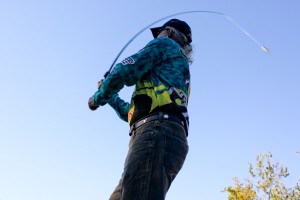 It may come as a surprise to everyone to know that Rick Clunn, who is known for his ability to attract tournament winning bass on a crankbait, and for his skills with a spinnerbait, finds a topwater bait to be among his favorite and most productive lures.  In fact, Clunn has been enamored with the exploits of topwater chuggers for so long, that when he couldn’t find the baits he wanted anymore, he had someone design the perfect replacement.

In his early days of guiding on Lake Conroe, outside of Houston, Tex. he would throw the original Rebel Pop’R, and he would produce results.  But, when a customer showed him a new way to fish the lure, it became his closest guarded secret.  “I used to work topwater chuggers the way my dad taught me to,” said the four-time Bassmaster Classic Champion.  “I would make a cast and twitch the lure once and wait for the ripples to disperse, and then do it again.  One of my customers opened my eyes to a new way to fish it.”

When his guide client began casting the lure and working it quickly, the results were explosive, and it convinced Clunn he had discovered a secret.  “He made that lure dance and spit, and it really created an aggressive response from the bass,” he said.  He really moved the bait fast, and I hadn’t seen them fished that way before; it became a major part of my fishing.”

While he began to rely on the bait, the company discontinued it.   But, when a friend of Clunn’s, a fellow Texan and tour angler Zell Rowland won the 1986 Super Invitational on the Tennessee River on the bait, the interest in the lure renewed.  Rowland helped Rebel re-make the lure, but it was not the same, and Clunn couldn’t fish it the same.  “That was when I got a hold of Lobina Lures, and the Rico was born,” he said.  “I was able to work with them to combine the best of the original with the features I wanted to make the Rico.
The Rico, as Clunn had learned from his client early on, was best fished at a steady and aggressive pace, this type of movement of the bait created  much more of a reaction strike for the bass, and the result was more often than not a bigger than average size bass.  However, there is more to Clunn’s Rico approach than just casting out and quickly retrieving the lure.  By nature, the Ava, Mo. Pro is a very intelligent, cerebral angler, and every detail has been thought out thoroughly. 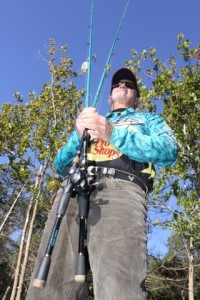 Getting the Right Action
“It all starts with how the bottom lip was designed on the Rico,” he said.  “The lip can’t be too cupped, or it interferes with the retrieve I like to use.”  Along with the construction of the Rico, Clunn has some very specific facets of his application that he employs.  “I always throw it on heavy mono, at least 17-pound-test clear Bass Pro Shops Excel monofilament,” he said.  “Mono floats, which helps keep the bait up on the surface, and because it has been around for so long, is the most consistent line out there.”  He shuns braided line on the Rico because it is harder to free a lure that has become stuck, without completely destroying the hooks.

One of the other ticks Clunn uses is to carefully position the knot, and how it is attached to the lure.  “To fish it the way I do, the knot has to be tied directly to the lure with no split rings or snaps,” he said.  “The knot must also be pushed all the way to the bottom of the eye.  I tie an improved clinch knot, but it doesn’t matter which knot you tie, as long as it stays on the bottom of the eye.”

If the water is more off colored, Clunn turns to a more traditional retrieve, popping the lure and pausing it for several seconds.  It is not important at this point to keep the knot low on the line tie.

Equipment and Casting
Clunn sought out long ago to simplify his equipment choices, and as a result, he uses the same rods for all of his fishing.  “I use my Wright& McGill Co. seven-foot heavy action rod,” he said.  “The rod has become an extension of my arm, and my mind doesn’t have to think about the factors of different actions when fighting a fish.”

He revealed that his rod choice is a result of focusing on one of the three options when considering rod action.  “There are three factors when choosing a rod, casting the lure, working the lure or landing fish,” he said.  “I chose the latter, because I want to know that I have the ability to control a big fish when I get it on the line.”

His rod choice creates an interesting dilemma when casting light lures, but he makes sure his reel is set to handle the job, and he makes an adjustment in his casting technique.  “I set up my Victory casting reels so that they are able to cast light lures like the Rico, or small crankbaits,” said Clunn.  “Along with that, I don’t use the rod to cast the lure.”

While most people use the rod tip to whip the lure out there, Clunn said he replaces the whippy action of a light rod tip with the momentum of the line.  “I allow more line to be out when I’m casting a light lure,” he said with a chuckle.  “It tends to make me a little more dangerous to passengers, but it adds momentum to the cast, and I can really fire it out there.”

Where to Fish the Rico
Unlike Flipping, or throwing a crankbait which are largely target oriented techniques, Clunn feels that topwater is an “everywhere” technique, especially in clear to lightly stained water.  “I use the power of the Rico to pull the fish to the bait,” he said.  “In clear water, I’ve seen fish move as far as 30 feet to strike a Rico, so I try to cover everything.” 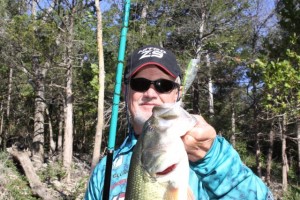 From the spring period around the spawn, through the summer and into fall Clunn uses the Rico on points, pockets, bluffs and everywhere in between.  He related that at the last Bassmaster Elite Series tournament on Clark’s Hill Reservoir in Georgia, he used a Rico.  “Those fish were suspended in the middle of the coves and pockets,” he said.  “Moving the Rico quickly over them generated strikes.”

Colors and Size
The Rico comes in many premium Japanese quality finishes, but Clunn is a master of simplification.  “I use primarily the Cisco pattern, but will also use Lightning Shad if the water has a little more color to it,” he said.  “I try to simplify things to reduce mental clutter, but there are several colors that will work for other folks across the country.”

Clunn said his favorite size is the original Rico, which is about two and a half inches, and weighs 1/4-ounce. But if he is around big fish, he will opt for the larger Rio Rico.

He emphasized to not be surprised at the size of fish that will be drawn to the Rico.  “The largest fish I’ve ever caught on the Rico was a 7-pound, 15-ounce Lake Murray largemouth,” he said.  “When it struck, I thought it was a bream, it bit so lightly, they catch really big fish.”

For Clunn, the Rico has been a part of his arsenal for many years, it was his primary lure in his first U.S. Open win, and continues to be one of the master’s puzzle pieces today; perhaps his favorite one.