Safety on the Water – Prepare for the Worst 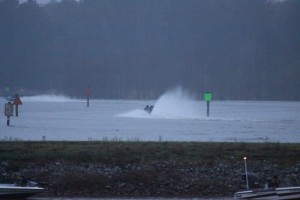 I’ve done stories about safety concerns here before, but I had never really experienced anything myself that made me know how quickly things can happen on the water.

After accidents or incidents involving other people that involved injury or worse over the past several years, I’ve written stories about things we can do to avoid accidents, or be prepared in case of one. But, something happened this past weekend in my boat that reminded me why preparation is vital.

I fished a memorial / fundraiser tournament on Lake Martin outside of Alexander City, Ala., my first since we moved here. My partner for the tournament was my friend Jim Hardy, the founder of Outdoor Friends Forever; the organization the event was raising funds for. Jim is an amazing individual, he had been injured in a deer stand accident many years ago, and has been in a wheelchair since. Despite those “limitations”, he continues to fish, hunt and live his life very independently. We decided to fish together, but we would only get to practice together for a little while because he was showing a friend of his, a new angler to tournaments around on Friday.

It had rained steadily for two days of travel and practice, so everything on my boat was extremely wet. I spent part of Thursday and most of Friday on the water, with Friday being one of those driving rainstorms that requires industrial strength fans to dry out from.

Tournament morning arrived and Jim and I ran to our first fishing area. We fished for a couple hours and had three fish in the boat. We decided to make a move to a new area to try and finish our limit and give us a chance to upgrade.

I had noticed during blastoff that my trim was sticking in the down position, causing the bow to start falling while driving, but when I would tap my switch back into the middle position, it wouldn’t continue. I was aware of it, so it wasn’t a problem. An annoyance, yes, but not a problem.

On that midmorning run, we were coming out of the creek we were in to a set of points with shallow pockets on the main body, I ran to the end of the points, and started to turn to my port side to the last in the set of points; that was when it happened.

As I turned, I could feel that I lost bite from the propeller a little, so I pulled my foot off the throttle, and the back end of the boat started to come around. I watched as the bow hooked back towards the direction we had come from, and then the boat continued its spin until we were pointed almost directly back to the point I had begun to make my turn towards. We had done a full revolution, and almost another quarter before the boat settled and the wave of water washed over the transom.

After we came to rest, I looked back to see my motor all the way up in the tilt position, so I knew that something had happened. It could be one of two things, the trim relay under the cowling stuck, or the trim switch itself did. Because the switch had started sticking in the down position in the rain, I assumed it was the switch; which is exposed to the rain. 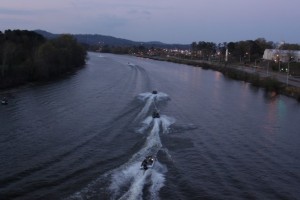 Boats Blasting off on Neely Henry – photo by Dan O’Sullivan

Both of us remained in the boat, only Jim’s strength in this upper body keeping him in the boat. Had I been making a turn to starboard, and I’m pretty sure he would not have; there’s just not enough to hold on to on the inside of that seating position in a single console boat.

We gathered our thoughts quickly and continued fishing. But, I thought about the situation on the way home from the event just how things could have turned out differently. I’ve always been a fairly conservative boat driver, I like the speed, but I’ve never been one to cut corners and put myself or my passengers in peril intentionally.

Even with that, something happened this past weekend that left me completely helpless and out of control of my vessel. I didn’t see it coming, I wasn’t being extreme in how I drove the boat, and yet, it still happened.

We both had our flotation vests on because it was a tournament, but the truth is, I don’t operate my boat, or ride in one – without one on if at all possible. There are times that I’m at a media event that there isn’t an extra vest for me, and I’m always extremely uncomfortable in that situation.

I spoke to Elite Series pro Matt Herren yesterday, who said that he has experienced the same occurrence in a boat years ago where the trim switch got wet and stuck, and the moment he lifted his foot off the throttle, the motor tilted up and he spun as well. He told me that I was lucky I was in a Skeeter Boat, because the hull will slide; any other brand of boat, and we would have been ejected when the hull grabbed in the water.

I don’t know about any of that, but I know that I like to be prepared in case of emergency with flotation vests on and all of the other safety gear I can keep in the boat. I urge all of you to do the same, learn to operate your boat safely and take precaution to help avoid accidents.

I hope nobody ever has to experience what we did, but even with all of that, they still happen, and I hope you’re all prepared to have it happen if it does.