Our friends at Bad Poncho Outdoors do a good job of  covering all types of Outdoors activities, and being from Michigan, one of the things they love to do is fish through the ice.  Today, they give us a review of some augers that will help you select just the right one for the job.

Last week we did a little article on the types of ice augers and a little on pricing, we were surprised at how well received it was so I figure we should go a little more in depth this weekend and revisit before checking into a few shelters on Monday.

There are really only two types of augers; manual and power. Manual augers are by far the most popular due to their relatively low cost, virtually no maintenance, and simplicity of use. 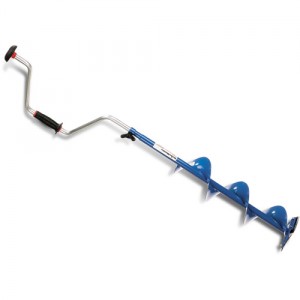 Standard manual augers are made up of just a few simple parts. Beginning at the top is the head, here you take one hand to steady yourself, down from there is the handle which you twist to rotate the blade through the ice. Looking at an auger they look as simple as they actually are which means just about anybody can pick one up and start drilling holes.

If you’re looking to get into ice fishing there aren’t a lot of choices in manual augers but that isn’t necessarily a bad thing because the StrikeMaster Mora and Lazer are staples in the industry and at $50 for the Mora they are hard to compete with. If mainstream isn’t your thing then you can look into the alternatives like Eskimo, Frabill, HT, and Clam. Manual augers don’t only have the advantage of keeping cost down but they also offer the opportunity to transform into a power auger at a relatively low cost.

If you’re not wanting to drill 200 holes in a day then stepping up from the manual auger is the electric power auger. These tools are recent additions to the market but have already gained popularity in many ice fishing circles. The most popular conversion for this is the NimRod, this is essentially just an adapter you put onto your 18-volt drill, the only problem with this system is the torque load is on the drill itself which can wear out your drill quickly, but at $20 for the adapter it’s a great deal to get started. If you like that system then you will love the Clam Ice Auger Conversion Plate. By using the $60 plate system you now have a full set-up to reduce torque and put more energy into the drilling itself which means more cutting and more life out of your drill.

What makes up this nifty little plate you might ask, well I’ll tell ya! You’ve got the actual plate itself which resembles that of a big ol’ gas auger, that big plate and handles give you the stability and the assurance you won’t twist your wrist and put you out of work for the next 2-4 weeks. Also included in the kit is the attachment for your drill itself that you replace the chuck with, this piece goes inside the commercial grade bearings which again, reduce torque. The way the system works is the drill is put into a U-bolt system 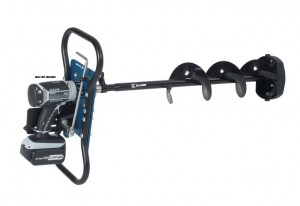 to hold it in place, from there a lever is extended to the handle, this lever will manipulate the trigger of the drill.

The average 18-volt drill is said to do 40-50 holes or 600-700 inches of ice with a 6″ bit, the nice thing about this guestimate is it isn’t particular to the actual system. I will say the electric drill variants are my personal favorite because I can carry two or three extra batteries with me. If the drill doesn’t do it for you though we do have another option.

If you’ve got a little more money to spend ($500) then you’ll be interested in the no-fuss, no-compromise ION auger. The ION uses a massive 40-volt lithium ion battery that is said to cut through up to 40 holes through two feet of ice or 960 inches! The ION features a unique U-shape handle design in a 22-lb package for the 8-inch system which translates to roughly 40% less weight than the run of the mill gas auger. The best thing about the ION, and the other electric systems for that matter, is there is no choke to deal with and they aren’t cold blooded beasts like most gas augers, plus the added benefit of the nice and quiet operation is always nice.

Next up we have gas augers, the interesting thing about gas augers now is we get to discuss propane. Jiffy came out with their Pro4 Lite which uses a standard “Coleman” propane tank to power a 4-stroke 38cc motor. Propane eliminates a lot of the prime and choke problems that standard gas augers are plagued with. Propane also offers a smoke-less operation, this gives you the option of using the auger inside your shelter, something I wouldn’t dare to do with a smoke belching gas auger. The estimate cutting for the Pro4 Lite is 100-150 holes through two feet of ice which is equal to 3,600 inches of ice on a propane tank. The Pro4 Lite comes in at the price of around $500 and the average tank of propane in my hometown runs roughly $5, sounds like a pretty smokin’ deal to me! 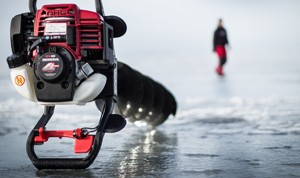 Finally we have your standard gas augers. It seems more companies offer these augers in the $550 than those that offer all the other types combined so we won’t spend too much time here. There is one major standout though in the gas auger battle, the StrikeMaster Honda. The Honda system used by StrikeMaster is a unique one, coming with a bladder around the crankcase that allows the auger to be stored upside down if need be. Your standard auger can usually only be laid on one side and if you lay it wrong you could either have a dry crankcase or a wet exterior of the drill. The StrikeMasters come in at around $580 but are offered in a up to a 10″ blade which is great for monster northerns, walleye, and muskie through the ice.

The Honda Lite comes in a 26lbs for the 10″ model and just 23lbs for the 8″ model which is fierce competition for the ION. While the Honda does throw out some smoke it is estimated to cut 200 holes through two feet of ice which means 4,800 inches of ice on a full tank of gas.

The beautiful thing about ice fishing is you don’t need to spend $40,000 on a bass boat to get to your favorite spots, you can spend as little as $75 starting from scratch for everything and hit the ice for some slab crappie and bull bluegill. Ice fishing is a wonderful world and a great way to enjoy time with friends.

We hope to see you out on the ice!