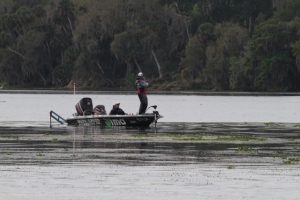 Many of the anglers that make up the rosters of both pro tours spend much of their winter in a deer stand. The thrill of stalking a deer and then finally conquering it with a bow or rifle proves to be exactly what the doctor ordered to recharge batteries and prepare for the following season.

But, for a few, the best way to stay in shape for the year ahead is to fish more. Fred Roumbanis is one of those anglers. The Russellville, Ark. pro is a fishing machine. From the time that the Elite Series schedule concludes, Roumbanis either fishes in more tournaments, or he just goes fishing for fun.

“No deer stand for me,” said Roumbanis. “I like fishing so much that I do it even when it’s not prime fishing weather.” What that has done is give Roumbanis ample opportunity to understand what works throughout a given season and what conditions to throw certain lures in.

“What I really love about winter time fishing is that I have the lake pretty much to myself,” he said. “I’ll fish for hours and never see another boat on the water. It’s a calming feeling to be out there and not have to fight for fishing space – besides that, we really catch ’em in the winter.”

The result of those solitary outings has been that Roumbanis has settled on a three lures that he uses throughout the winter to produce bass. He’s got one for a more aggressive bite, one for a slightly less aggressive day, and one for slick calm conditions.

He calls them his Winter Triple Threat.

Jerkbait
One of the best winter lures is a jerkbait. When the water is cold, anglers use the slashing style and suspending action of a minnow shaped plug to fool bass into striking. Roumbanis’ favorite is the ima Flit 120. “I prefer a bigger jerkbait most of the time,” he said. “I’m sure I would get more bites on the 100 size, but the 120 has a profile that appeals to larger fish.” 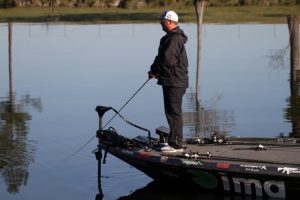 He rigs his Flit 120 on an iRod 703C, a medium action rod that is light and has a soft tip for tossing jerkbaits. He uses Ardent Edge Elite reels, he has grown to like the smaller size and the faster 7.2:1 retrieve speed. He selects 10-pound-test Fluorocarbon line for his jerkbait.

“I like to toss the jerkbait in water that is 12 feet deep or less; especially around points and boat docks ,” he said. “I make long casts and get the bait down to its depth quickly by making a few sharp snaps of the rod tip. Then I allow it to pause for several seconds before moving it again.”

He prefers the jerkbait when the water temperature is in the high 40’s to the low 50’s with a slight breeze to windy conditions.

Flat Sided Squarebill
Roumbanis also likes to toss a flat sided squarebill crankbait in cool water. The tight wiggle of the ima Shaker appeals to bass that have more of a lethargic attitude. While using a crankbait in the winter may seem like a bit of an odd approach, it is certainly a fish catcher for Roumbanis.

“I look for 45-degree angle banks near river and creek channels for this bait,” he said. “It is a perfect bait for when bass are moving up around the shallow rocks and stumps on sunny days. I can catch them on this in most any conditions, but if the water has a little stain, it warms faster in the sun.”

He chooses the same equipment for the crankbait as he does for the jerkbait, but he will use lighter line; sometimes dropping as low as 8-pound-test P-Line fluorocarbon to help the bait get deeper.

One trick he uses is to treat his squarebill like a small finesse jerkbait. “I pull the bait forward with slow, steady pulls of the rod tip, then let it pause for a few seconds,” he said. “I make some modifications to the lure to make it suspend, and it really catches a lot of fish.”

He uses Suspend Strips (lead tape) and increases the hook size to help the bait suspend in colder water. he like the crankbait in cooler water, from the mid to the upper 40’s. 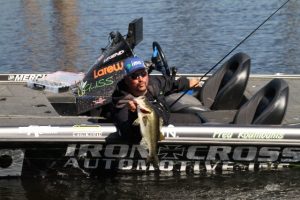 Finesse Football Jig
every angler needs to have a lure that they can slow down with when bass don’t respond to reaction presentations. For Roumbanis, that lure is a 3/8-ounce Pepper Jigs Finesse Casting Jig. The football shaped head crawls around and over rocks; which Roumbanis refers to as kickin’ rocks. “I use this when I really need to slow down,” he said. “The jig is great because it allows me to slow down, but still gives me a bulky profile to make bigger bass strike.”

He upsizes his gear for this presentation. His rod choice is iRod’s 704C, a medium heavy offering, and while he uses the same Ardent reel, he increases his line size to 12-pound-test; which allows the lighter jig to stay in contact with the bottom, but still has the strength to battle big fish. For trailers, he lets the fish dictate what he uses. He sticks with a twin tail grub if the bass are striking action baits, and switches to a pork trailer if they are more lethargic.

He has no water temperature range for the jig, but says that he uses it mainly when it is slick calm and bass won’t respond to moving presentations.