Shiver the Timbers with Gerald Brown

Story and Photos by Dan O’Sullivan

Brown is the founder of Gerald’s Welding a Chickasha, Okla. welding firm that serves government and private businesses in their custom fabrication needs. He’s the stereotypical of a blue collar worker who used his intelligence and effort in partnership with his wife Gayla to become a successful businessman.

He is also a tournament angler who loves fishing for bass. Their love of bass fishing prompted he and Gayla to purchase a second home near Lake Fork that serves as the home base for all of their tournament travels and their part time home away from home. 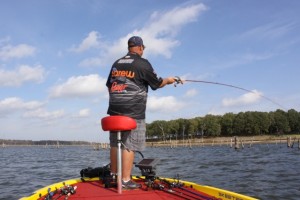 Two years ago, the Browns packed up their diesel pusher motor home and started fishing the FLW Tour. Brown decided that there was no better way to learn to fish at the top levels than to fish at the top levels. Being able to beat his head against the best gave him plenty of ammunition when he returned home to Lake Fork, and one of the things he learned is that when bass first start moving up in the spring; you only need to do one thing.

Look for the wood.

Spawning Creeks
Brown said that he has spent as much time as he can on Lake Fork looking to learn exactly how to locate Florida Strain largemouth as they move from their winter haunts to their spawning locations. “Just about any time of the year you can catch good quality largemouth on Lake Fork out on the main lake points,” he said. “But, when the days start to get longer as early prespawn approaches, bass move towards the mouths of the creeks and then slide into the back.”

When they start to do that, Brown said he begins by targeting the most obvious openings in the standing timber at the mouths of spawning creeks. “If you stop for a minute and look at lakes all over the country, you’ll see a forest of standing timber, in creek mouths,” he said. “If you look at what’s left of the trees, you’ll see a gap in the trees where the main creek poured into the river channel – that is where I start.”

Pound the Edges
While he starts his search at the gap in the trees, he looks at Brown said that he likes to target those areas that he feels represent the creek channel through the forest. “I really try to find what I believe is the creek channel running through those trees,” he said. “If I look at the trees, I’ll be able to see areas that there are no trees, and if I visualize the path those vacant areas meander, I’ll be able to find the main creek channel. If I combine the what I see in front of me with my fishfinders; I’ll find the edges I’m looking for.” 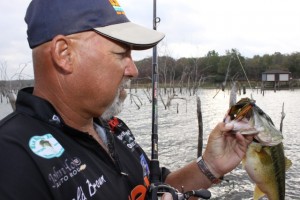 The edge of the creek channel features the sharp drop off with stumps or standing timber adjacent to it, and that often relates to the perfect staging area for a big bass. “I love it when I can find these things together,” he said. “If I can find them where they come into contact with a point in the creek – oooh, look out!”

But, if the wind has laid down and the fish are not responding to the reaction baits; he turns to a jig. “I like to swim either an Elk River Jigs Brush Jig or their Flippin’ / Swim Jig in my custom HeBe GeBe color; which is a combination of Green Pumpkin with a little orange in it,” he said. “I match the jig with a Gene Larew Biffle Bug Junior in Sooner Run color anytime of the year or water color.”

He said the key to all of the baits he uses is that he has to bump the cover. “If I don’t bump the cover, I don’t get bites,” he said. “There are certain times of the year that it’s more important than others, but bumping the cover is important.”

Speed is also important, he uses a 7’6″ heavy action rod for the jig, which he pairs with a Lew’s Speed Spool Tournament Pro reel in 7.1:1 retrieve speed. He shortens the rod and uses a 6.4:1 version of the same reel for the other lures; he prefers glass for the crankbaits.

Shiver the Timbers
He believes big bass can be finicky this time of the year; especially during cold front conditions, and anglers need to be ready for their mood. “Florida Strain bass hate cold fronts,” he said. “They react by getting as close to cover as they can. I’ve even seen them rubbed raw on one side of their bodies from getting up tight to cover in a storm.” 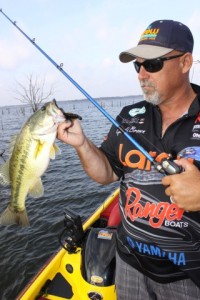 “If people take the time to try and read the timber, find the creek channel, and fish it thoroughly in the prespawn period; I guarantee they’ll catch some fish they didn’t expect to be there.”