Well, the 2012 Bassmaster Elite Series season is behind us and I have to say that I’m actually quite pleased with the way things turned out. For a while there in the middle, I wasn’t sure how it was going to go, but I was able to turn it around.

I started out the season pretty strong, with three top 10’s in a row, and I was even leading the Angler of the Year race. You all pretty much now that winning the AOY is my goal every year, and when things got started, I felt pretty good about the way it was shaping up. Then, I hit a rough patch, and I even fell out of Classic qualification position in the points, and I thought for a minute the wheels were coming of the bus. 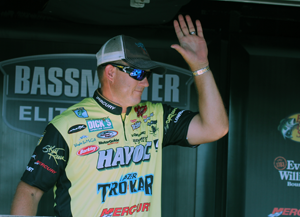 Then I hit my fourth top 10 of the season at Green Bay and I moved up to 16th place in the points, and all I needed to do was have a decent event at Oneida, and I was in the 2013 Bassmaster Classic. My need for Oneida was different than my goal.

I knew all I needed to do was make the 50 cut, and the Classic was pretty much done, but I still wanted to have a good tournament to wrap up the year. I thought that it was going to happen too, because I seemed to be able to catch a few good quality fish in the morning and try and fill in around it through out the day.

My day started out pretty well. I was able to catch two three and a half pounders; but, then the bite stopped. So, I scrambled around and filled my limit. I was able to climb into 18th in the tournament and I ended up 11th in the AOY points.

I had a couple of bad events, and that really hurt my chances at AOY. If those events would have been mediocre, instead of bad, I think it would have changed the season for me.

I’m not saying that I would have caught Brent Chapman for the Angler of the Year title. He had a hell of a year and I really think that he was just meant to win the title this year. He has faced a lot in his career; has seen the ups and downs and I’m really happy for him and Bobbi for this accomplishment – Congratulations Brent.

The other reason I’m excited about him winning, other than the fact that he’s a great guy, is because he fishes my Wright & McGill. Co. rods and reels. He fishes the exact same black and yellow rods that I do, and that all of you can get right off the rack. A lot of people think that we use custom rods painted to look like the one’s we sell, but we don’t. Brent’s AOY is proof that the angler wins the titles, not the equipment, and a rod and reel that is value priced can still be a great weapon. 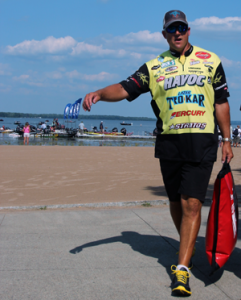 After Oneida, I headed to Mayville, N.Y. And the second Major League Fishing event at Chautauqua Lake. I was really excited to film this next event because I’m excited to see how MLF grows. I really think the organization has a great plan for growing the brand, but also the sport of fishing. That whole industry approach is really going to be good for us as anglers, and the sport.

Chautauqua was a beautiful lake, and the whole community around it was really friendly and beautiful itself. It was a great place for us to film our second event. I think that everyone is going to love it. I also think that the fact that the finals of this event will be airing on NBC Network is going to be huge. Not only is it a big deal for Major League Fishing and the anglers, but again, for the sport of bass fishing. I’m proud to be a part of MLF.

Now, I’m home, and I was really excited to get home and see Kim and the Girls after being on the road for three weeks. The girls were all exhausted from the first week of school, and I was dragging from being gone so long, so we’ve spent a bunch of time just haging out at the house. We’ll have some people over for Labor Day, but then it’s back to business, soccer and school. It’s amazing how much your kids can change in three weeks. I always miss them so much when I’m gone, and I’m glad to be home.

Well, the only thing left as far as fishing goes this year is All Star Week in Illinois. I really was very honored to be voted in by the fans last year and I hope they vote me in again this year. It’s funny to look back on that last year and realize that you have so many fans; it’s really humbling. 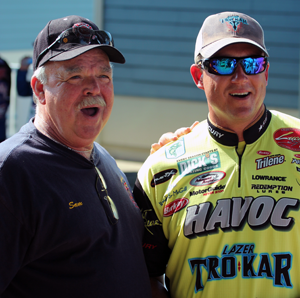 I’ve tried to give the fans the best I could year after year, and I’ve really tried to be as real to myself and connect to them throughout my career. To know that they like me enough to vote me in last year was honoring, and I hope I’ve done enough to honor their fan-ship.

I really hope they vote me in again this year. I know that it’s not on the Alabama River this year, but I’ve got a bone to pick with this whole format, and I want the chance to win this last event this year. I’d love to have that chance, and I’m asking all of the fans to vote for me, because we’ll do this again, together.

We’ve been in it together all of these years. You guys giving your all to me as fans of the sport, and I keep trying to give it back with wins, great products and sharing my experiences. Together we make a a great team, you’re all a part of what I do. Without you, there is no reason to do this, and I can’t thank you enough for voting me in lasdt year and considering it again this year.