Skip the Obvious with Gerald Swindle

Despite being known as the clown prince of bass fishing, Gerald Swindle has also earned himself a reputation as one of the best anglers in the game today.  His fishing style; like his sense of humor, can find him fishing one pattern in the morning, another one in the midday, and then another in the afternoon. 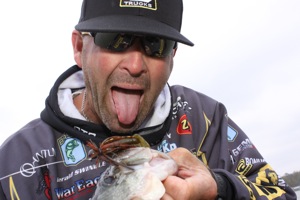 The best way to say it is that GMan is versatile.

A fan may find a dozen Quantum Smoke rods and reels on the deck of his boat at any one time, but the one thing that will always be rigged and ready is a jig skippin’ rod.

Swindle said the approach works well around multiple types of cover. “Most people assume that a jig skippin’ rod is for working around docks,” he said.  “Truthfully, they’d be right, but that’s not all it’s for.  I look at my skippin’ setup as the way I can get an extra bite anytime I get around any type of overhanging cover.”

However, Swindle doesn’t limit the approach only to cover and he suggested anglers look at the skip cast as a tool.  “The skip cast is kind of like the 1/2-inch wrench in my toolbox,” he said.  “It’s a tool I always have at the ready because I can always find a place to use it.” 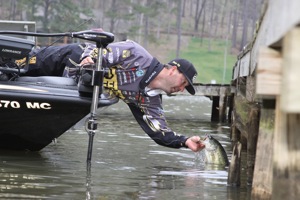 Look Past the Obvious
Swindle reported that he looks at the same places that everyone else does.  “Docks are great for skipping, especially when there are multiple pilings and junctions,” he said.  “I like to try to line up pilings and try to hit more than one on a single cast.”  He also looks at overhanging brush as a great place to skip jigs.  If he finds an area that has brush that is creating a canopy and shade on the water, then he targets that area as anyone else does.

However, it is his willingness to look outside of the norm that gives him an advantage with the technique.  First, he likes to remind anglers that a jig is a great bait for getting better than average bites, but using it differently than others helps set him apart.

“Anytime I need to use the skip cast to present the jig differently, I will do it,” he said.  “Whether there is on branch just kind of extending over the water, a laydown tree that has a gap in it or between branches on that same tree; I can always find a place to use that tool.  I even use it when bass are schooling but won’t come to the surface to eat a topwater lure.  The additional commotion of the skip cast can mimic shad trying to escape; so I use it on open water too.”

Tools
As youngsters we are taught to skip rocks on the water by finding a stone with a flat surface that will slide across the water without digging in.  Swindle uses jigs that present a similar action on the water. 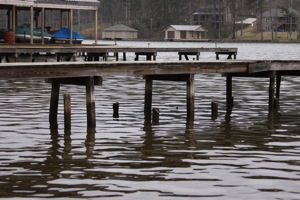 His first choice is the original Arkie Jig because it features a compact head with a semi flat bottom. His second choice is a ball head jig because it has a compact shape that also skips well.  In either case he usually goes with the 3/8-ounce size because it is not too heavy, but still has enough bulk to give the bait momentum on a cast.

He pairs his jigs with one of two trailers, and it depends on the size of fish he believes he is targeting.  “The Zoom Fat Albert Double Tail Grub is my first choice because it has a full body to slide up on the hook,” he said.  “But, if I feel like I need a little bigger profile to appeal to bigger bass, then I choose the Zoom Super Chunk; otherwise known as Rabbit Ears.”

He uses a 7’ medium heavy Quantum Smoke rod and 6.3:1 Smoke reel that he fills with Vicious Pro Elite Fluorocarbon line; usually 20-pound-test.  He uses heavier gear because he is likely going to have to pull fish from the cover and stout tackle helps him in that task.

Practicing
Swindle suggested that anglers who want to learn how to skip cast more effectively spend some time practicing the approach.  He also said that the best place to learn the technique initially is not on the water; but rather in the driveway. 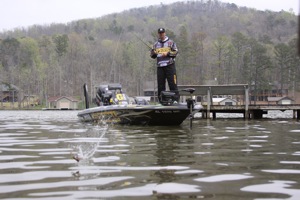 He said that learning the release point is critical, and taking the time to get comfortable with the motion is beneficial.  “I stand on a little platform or a chair to mimic being on the deck of my Triton,” he said.  “Then I start making casts up the driveway on the pavement so that I can learn to control the line and bait while watching the flight of the lure.”

He sets the centrifugal brake system on his Smoke reels much like he would when he tosses a spinnerbait, then he learns how much effort it takes to fire the lure on a low trajectory, achieving good distance without getting backlashes.

The biggest problem most anglers have is trying to throw the lure too hard.  Swindle said that too much effort will result in a lure that usually goes too high, entangling in the cover.  “With a little practice, it doesn’t take too long to get the hang of it, he said.”

When Not to Skip Jigs
Swindle said he always has it at the ready, but said that the one time he struggles to make the technique work is when there is too much chop on the water.   “Whether they are from wind or heavy boat traffic, waves make skipping really tough,” he said.  “However, anytime I can get moderately slick water; I’m going to give it a try.”