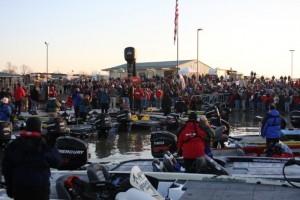 Takeoff at the 2009 Bassmater Classic – photo by Dan O’Sullivan

We all see the pros that fish the Bassmaster Elite Series and FLW Tours doing what they love.  We see them on television catching – or not- catching bass, winning, or losing events and putting on a show for the camera.  But, that activity is only a small percentage of their job.

Of course, it is one of the most important parts of the job, but in the actual application of a career, the fishing part makes up probably less than a third of their actual time on the job.  There are the office work days, the travel days, the research days, the show days and of course meetings with sponsors and sales calls to potential sponsors; media interviews and on, and on…

Not all Fun and Games
While so much of the job seems like busy work, the good news is that most of these anglers do genuinely enjoy the interaction with fans, so it becomes part of the enjoyment and not part of the mundane.  However, as one of the Elite Series pros’ wives told me recently, that they (the pros) do all of this work so that they can do what they really love to do; which is fish.

All of that said, they do that one part with as much passion as they can.  The long hours of practice during tournament weeks all are performed as a labor of love so that they have a chance at winning an event.  The best part about winning a tournament – on the business side – is that it helps the angler build credibility with the consumer for their sponsors.  However, to the angler, that is only part of the equation until after events have concluded; then the business begins. 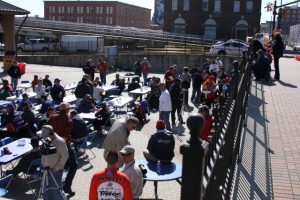 Here is an example.

Okay, Some Fun and Games
Being from California, I have gotten the chance to work with Skeet Reese, Ish Monroe, Byron Velvick, Aaron Martens, Brent Ehrler and some of the other Western based pros quite a bit.  Of all of them, the one I’ve worked with most directly is Reese.  I started writing for his personal website in the fall of 2008, doing his wrap up stories and such.

I was there in 2009 when he won the Bassmaster Classic.  I mean, of course I was there, but I meant, I was able to experience the victory from as much of an inside position as a guy like me could.  What I saw was remarkable. 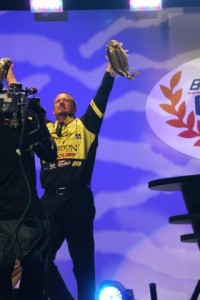 Reese is one of the most business minded anglers on tour, his business acumen is astounding, and he works with his partners on very deep levels.  None of that mattered in the moments after he won the Classic.  In fact it wasn’t until nearly an hour later, when we were sitting in a private room after the press conference when one of his daughters was playing with the Classic trophy that he and his wife Kim realized the value of the win.

He asked his daughter if “she liked the fishy?”  I remarked that “I hope so, it’s worth $500,000.”  Both he and his wife looked up at me and with shocked looks on their faces realized for the first time there was a financial component to the win that rewarded them for the effort.  Up until that moment, Reese might has well have been a Little Leaguer playing in his town’s championship game – it was complete and pure joy of an accomplishment, nothing more, nothing less, and it was impressive to witness.

The Work of Promotions
In order to completely understand the life of a competitive angler, we must first realize that their whole professional life is a competition.  They not only compete on the water, but they compete with other anglers for sponsors, they compete for space in magazines, for cover shots, for time on airwaves, for sponsor dollars and for new products.

Their whole being revolves around competition.  With that said, most of these anglers are as loyal to their sponsors as they possibly could be.  With a major win being worth major credibility increases to fans, major media value to sponsors in both airtime, print and Internet publications as well as direct sales in some cases, they do everything they can to make it happen on the products that their partners produce.

There are instances where a specific body of water, or a time of the year might find a hole in a sponsor’s product lines, but for the most part, these 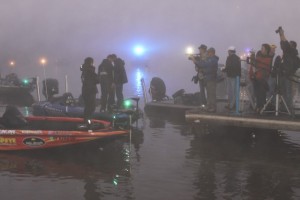 anglers are tremendous at working with their people to use the product and provide feedback where necessary to improve a product.

While they would of course love to have their anglers using only their products, most sponsors understand that there are times a product may not match up, and their anglers might have

to use something else to win, but sponsors expect that from time to time.

With that being said, if an angler has to use a product that is not from his sponsors, then using a generic term to say what category the lure is in; such as, deep crankbait, creature bait or jerkbait is the best and most professional way.  Another professional method is to politely say, I would rather not say a specific brand, and from someone who performs the role of sharing that information with the public; I’m okay with that. 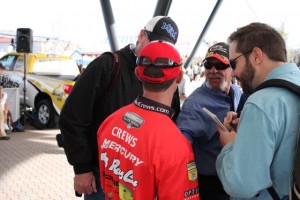 You see, part of my job is to help these anglers do their jobs.  It’s a very interconnected world we live in working in this industry, and while I will not – by any means – sacrifice my own integrity to knowingly help an angler outright lie about a product’s usage, I will give them the grace to allow generic terms to be used.

A Metaphor
Let’s relate it to something that may make sense to some of you.  Let’s pretend for a minute that you are a plumber, or a mechanic, and you get paid a certain dollar amount to work for your a company.  For example, your hourly wage is $25 per hour.

How would your company feel if they found out you went to work for a competitor at half the wage after hours, or worse yet, as a favor.  The likelihood is that you could lose your job over the situation.  Anglers face much the same when faced with using and endorsing their sponsor products, or talking about products that they use that they are not compensated for.

There are products that many anglers use, Power Pole, Hydrowave and fishfinders that they get no compensation for, and in most cases only get a discount when purchasing.  So, when an angler decides not to mention that product being used, it is out of respect to the companies that compensate them for endorsing their products.

If they were to endorse another product for no compensation, then why should any of their companies provide a living for them if they are going to publicly endorse a product for free.

Wrapping Up
We all see the professional anglers competing at the Elite Series or FLW Tour events, and we assume that their lives are perfect, that they make a ton of money and they do what they 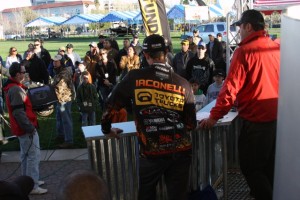 love.  To a sense, that is true, but the fishing, the part of the job that made them all want to do it for a living becomes the smallest percentage of the profession in terms of time spent on tasks of their occupation.  I’m not suggesting that we feel sorry for them, not at all, what I am suggesting is that we look a little deeper at what we expect them to say on the water about the tools that they use.

For the most part, they are all earnest about doing a great job for their sponsors, the leagues and the industry as a whole.  We have all seen what happens when organizations try to put just anyone into a jersey, the popularity of the league is not what drives it.  Our sport is built on people following personalities.

From the days of Roland Martin and Bill Dance to the days of Ike, Ehrler, Dudley, Swindle, Reese and KVD, the people who follow this sport follow them.  We share a passion for the pursuit of fishing together, but we need them, and those coming along after them to push this sport forward.  Understand what it takes to perform the job, and you’ll have a greater respect for the people who do it, and those behind them that help make it happen.