Advanced Angler.com’s Associate Editor Tom Leogrande got the chance to spend three days on the water with three Tour Level pros as they practiced for the Toyota Texas Bass Classic at Lake Conroe last month. Leogrande, an avid angler, walked away from his experience with a whole new appreciation for the skill level of anglers on the Elite Series and the FLW Tour.

In honor of the TTBC beginning airing on Versus this week, we asked Tom to reflect on what he saw while on the water at the TTBC, and here is what he came away with. His reflections are insightful and they give us all a chance to think about what it takes to excel in any venture.

So you think you can fish?

I used to. Yes, that is correct I said, “I used to;” meaning at one point I thought I was pretty good at fishing and I no longer do. What happened to me? What caused me to change my point of view of my fishing skills? Actually, it had nothing to do with me at all.

I spent three consecutive days on Lake Conroe, Tex. with three of the best anglers in the world. Each day I was amazed by how little I knew about my electronics, how little control of my boat I have and how much practice I need casting before I can consider myself a good fisherman.

Truth be told, I am an average angler. I have my days where I catch some good fish and get a check in a tournament. I’ve even won a handful of events with some decent weights, but I never really considered myself a good fisherman. 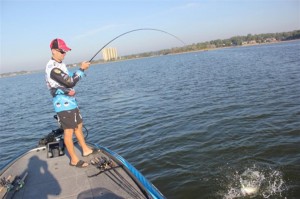 However, deep down inside me in a place I would never discuss publicly, there was a little part of me that believed “I might be able to compete with these guys”. I am sure many local and regional anglers; like myself, feel the same way. Let me assure you, for me, that belief no longer lingers anywhere inside my head!

The Stage
I headed to Lake Conroe, Texas to do some publicity work for a few anglers during the Toyota Texas Bass Classic. I spent three days pre-fishing with Aaron Martens, Brent Ehrler and Randy Howell. (Editor’s Note: The TTBC begins airing this Saturday on the Versus Channel, check The FishPAA.com website or your local listings for airing times and channels.)

Electronics
I’ve got side imaging on my boat and I’ve always thought it was really cool and definitely an advantage over the anglers that didn’t have it. What I didn’t know is how little I am able to use it in comparison to the best. My best analogy is a basketball. I can use a basketball, bounce it and throw it up at a rim at backboard and sometimes even half way decently. Give that same ball to Kobe Bryant or Dwayne Wade and they can do quite a bit more with it.

The difference between a basketball and fishing electronics is, it’s very obvious how much better Bryant and Wade are with a basketball than I am because I can flip on a TV seven months a year and see them in action. For anglers, we don’t really get to see them use their electronics. We assume they use them and most likely pretty well, be we actually never really get to see them use them.

All three anglers picked the lake a part in no time at all. Covering huge sections of lake and finding the sweet spots in each area in fractions of the time it would take an average angler. In a single day on the water with Randy Howell, he marked over 200 spots. I am not sure if I have found 200 spots ever with my electronics. 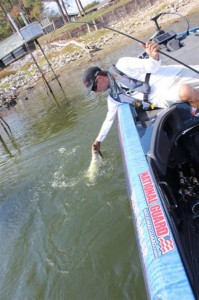 Not one of the anglers ever looked at a paper map. They used either the maps built into their electronics or Navionics chips and could break down football field sized sections of a lake every few minutes. In fact, in three days on a fairly decent size lake, I ended up in no less than 10 off shore spots all three days with each of the three anglers. Small spots, spots I wouldn’t find in months on the lake.

Boat Control
I’ve never been a big fan of fishing in the wind, for no other reason than because I hate trying to keep my boat in position to fish. With little or no wind, I do fairly well keeping myself in position to fish effectively.

Conroe had wind all three days and these guys made boat control look easy. Fishing off shore structure in three foot plus swells and keeping the boat in perfect position was impressive. In doing so they were able to fish spots that quite honestly, I wouldn’t have been able to fish, let alone fish effectively as they each did.

Casting
This is where I was really blown away. On day one, Martens was deep cranking. In order to get his bait down to the depth he was fishing he was making extremely long casts. Casts that were at a minimum 1/3 longer than any cast I could make. Still, not the most impressive thing I saw.

On day two, I was with Ehrler and he was flipping docks. There were little docks where you can tie up a bass boat. There were long docks that housed yachts and huge pontoon boats. These docks were forty to fifty feet long. Watching Ehrler skip his signature series Phenix Jigs thirty and forty feet through a two foot by one foot gap between a pontoon and motor blew me away. I asked him, “You know, not everyone can do that?”

“Skip a jig thirty feet from one side of a huge boat out the other side and then under the dock, all through a hole about the side of a shoe box?”

To which he replied, “Out here they do.”

I wasn’t convinced that was the case.

On day three, Howell convinced me. Not only did he skip a jig about the same as Ehrler, he could do it with his right or left hand.

You don’t get to see this on television shows nor can you read about it in a book, magazine or website. Most likely I am not doing justice to it here, but the skills of the best anglers in the world truly separate them far more than most people think. They do that by finding the best water faster than the average angler, keeping their boat in position in windy conditions and putting their baits in spots the average angler like myself can’t.