Gonzales, La. pro Greg Hackney has earned a reputation of being a heavy handed angler.  That’s not to say that Hackney struggles with how deft his touch is, or that he is a strict disciplinarian when it comes to ruling his subjects of his bass fishing kingdom.

Hackney loves heavy line, big baits, Flippin’ Sticks, stout hooks and heavy bass in heavy cover.  If he could, he would spend every day of his fishing career in the sticks and matted grass.  Hackney loves to go in after them, and drag them back out; whether they want to come or not. 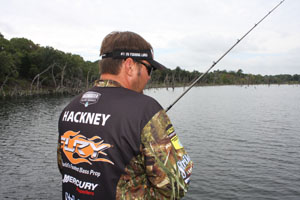 So deep is his love of heavy cover that a day without some finding sort of visible grass or brush in his Phoenix Boat is rare.  However, everyone needs to have a fallback plan, and while he would rather be digging a trench to bass in the back 40; even Hackney must scale down on occasion.

One of the ways he does so is to turn to a soft stickbait.  The soft stickbait craze started when the Yamamoto Senko hit the market.  Almost instantly, anglers everywhere became devotees to the lure.  Most anglers used 15-pound-test fluorocarbon line on baitcasting gear and an offset shank round bend or extra wide gap hook on the baits.

Anglers would rig the lure weedless by Texas Rigging it with no sinker and softly pitch the lure into small openings in and around cover and wait for the bite.  The lure would shimmy as it fell and bass would rush from cover to engulf the subtly falling lure.

However, as the category grew, and companies began marketing their own versions of the lure, bass across the country seemed to be more wary.  Leave it to a professional angler to find new ways to use an already effective lure.
Hackney developed a new way to fish the lure that he said works for him from the spawn through the hot weather months. 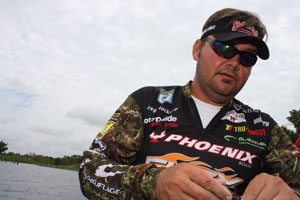 The Versatile Lure
“I think the oft stickbait; like the Strike King Zero, is actually one of the more versatile lures out there today,” said Hackney.  “The first way it was fished; as a weightless fall bait was very effective, but it catches fish several ways.”

Hackney said the first new style he tried was a wacky rig; which he used a Finesse Wide Gap hook and rigged the lure by hooking it cross ways through the middle.  However, the result was still a slow falling weightless worm.  He then began using it as a deep structure worm, by rigging it Texas style with a slip sinker on the front.  He would cast it to deeper offshore structure and work it like a big worm.

That approach led to him trying it as a flip bait, and with the approach, he found a new way to use the lure.  “I call it kind of a magnum Shaky Head,” said Hackney.  “I can get away with using heavier tackle longer, which is better to me than resorting to light line as the bite gets tough.”

The Rig
The Louisiana pro said that he uses his 7’2” medium-heavy Tour Hackney rod from Quantum, which he pairs with a Quantum Tour Edition 6.3:1 retrieve reel and 15 to 17-pound test Cajun Fluorocarbon line.  He uses a heavy wire Wide Gap hook and he adds an 1/8 to 1/4-ounce tungsten sinker 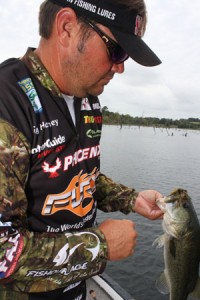 “Like I said earlier, the lure really is a way for me to get away with a little heavier gear later in the year,” said Hackney.  “I can use it as a flip bait, or cast it around docks and overhanging cover, but it’s not a finesse bait.”

How to Fish
Hackney said that he can pitch, flip or cast the lure, and he is not at any disadvantage.  “It can go anywhere that any other bait can go,” he said.  “In fact, it can even slip through cover better than most other lures because it has no appendages to get hung on the cover.”

Once the lure is in the water, Hackney allows the lure to fall straight down, then he employs a subtle shaking of his rod tip.  “I don’t need to do too much with it,” he said.  “The way it falls, and the overall size o the lure really produce the strikes by just getting it into the right place.”

Quality Fish Bait
Hackney revealed that he believes the rig is the best kind of lure for quality fish.  “It’s the kind of lure that will produce a solid 16 to 18-pound limit,” he said.  “Don’t get me wrong, when they’re up, it’ll produce 35 pounds, but in the toughest times of the year, it’s a quality fish presentation.”

Hackney said that he uses the lures at times when other anglers are hoping to shake up a limit of bass on straight tailed worms and shaky heads.  “While they’re looking to go through 20 fish to get 12 to 14 pounds: I’m thinking differently,” he said.  “This is the kind of lure that will get you five solid bites and a five to seven pounder.  When that happens, you’re all of a sudden at 16 pounds or better; that’s what I want.” 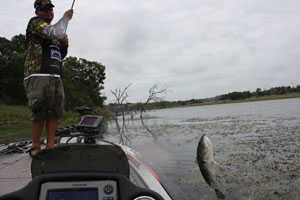 Have Patience
Knowing that it’s not the kind of lure that will produce big numbers of bass, Hackney encourages anglers to stay positive.  “You’re going to have to wait them out sometimes,” he said.  “It might take all day to get what you’re looking for, but it should be a little bit better than most of the competitors in the field.”

He also said it is a technique that is tailor made for one of the toughest seasons of the year; postspawn to the summer.  “Those big females are looking for something to help them recover in a hurry,” he said.  “This is a great lure to put in front of them and make them strike; it’s a great lure for a tough season.”

Find Products in this article and many more at MonsterFishingTackle.com