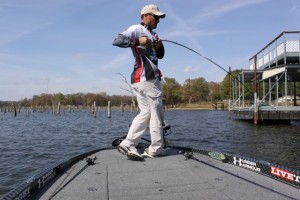 Like many bass anglers, Hot Spring, Ark. Elite Series pro Stephen Browning loves to deer hunt. The thought of getting into his deer stand with his bow in hand is enough to keep him warm for the winter.

But, as much as he loves bow hunting, Browning loves being at home with his family more. So, while his wife Tammy is at work, and his son Beau is at school, Browning attends to his other favorite outdoor pursuit – bass fishing.

Again, being from Hot Springs, Browning has spent many a day on the Arkansas River, and as a result of his upbringing on the river, Browning loves to get shallow and grind it out in the skinny water. “It’s just how I feel most comfortable fishing,” said the eight-time Classic Qualifier. “I know that I can catch bass shallow most of the year, and at a time when the majority of people leave the banks, I can still find enough there to do well.”

So, how does Browning do it? What are the things that he keys upon to find shallow bass in colder water, and what are the techniques he uses to catch bass when most people think it is too cold for power fishing?

His answer lies in a jig and a crankbait.

Jig and Crankbait?
Don’t be fooled when you think of a jig and crankbait being deep water tools in the fall. Browning said that he uses jigs and crankbaits and that he never looks deeper than 10 feet, even when the water dips below 50 degrees in his home state.

“I use these two techniques for three quarters of the year with a great deal of success,” Browning said. “The key to being able to fish this way if to know what to look for when you are trying find bass that you can target with these lures.”

Fall Rut Cover and Conditions
Like any other approach, there are certain keys to locating bass that will attack your presentation. For Browning this time of the year, it involves channel swing banks, bait and cover.

If he is on an upland reservoir like Ouachita or Bull Shoals, Browning said that he looks for channel swing banks in the creek arms. If he is fishing on a river system or a river type impoundment, then he targets the most obvious structure, wing dams and rip rap.

For the jig, he looks for chunk rock that is about the size of softballs. He feels that other angler look for pea-gravel and large boulders, so he prefers to find different cover. For the crankbait, he is looking for a banks that have some sort of wood, either laydown trees or stumps mixed in with the chunk rock. 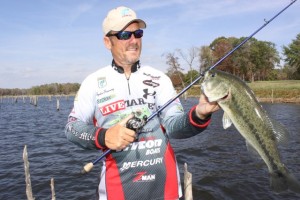 Either way, the key to finding bass feeding on the type of cover he wants to fish, is being able to locate baitfish on the areas that will hold bass there. “Once I find that magical combination, I can usually do pretty well with the jig and the crankbait.”

Split the Day
Browning thinks of his approach in two parts. Knowing that he is fishing colder water temperatures means that he must be aware of how the bass will respond to the environment. The method to his fall madness is to split the day up so that he is presenting the most likely thing to generate bites at the time that they will bite it.

“I tend to fish slower in the morning with a jig off of the shallow cover,” he said. “Then I turn to the reaction bait as the sun gets higher.”
While that may seem like a backwards way of doing things, Browning has a reason this time of the year. “When we start getting rains and the water dirties a little bit, the afternoon sun brings bass up in the water column,” he said. “I don’t think it truly warms the water much, but it must feel good to the bass; kind of like watching your old lab lay out in the sun on a winter day; it just warms the bones.”

Fall Favorite Gear
Browning said he likes to start out with a 3/4-ounce Jewel Bait Company Football Jig tipped with either a Z-Man Chunk or Flappin’ Crawz as a trailer. He prefers using the Green Gourd / Orange colored skirt and a green pumpkin colored trailer, because he feels that the majority of the crawfish in a lake are a green color.

He throws his jig on a 7’3″ medium-heavy, fast tapered St. Croix Tournament Bass Carolina Rig rod that he matches with a Lew’s Tournament Pro reel with 7.1:1 retrieve speed. He spools his reel with 16-pound-test Gamma Edge Fluorocarbon Line.

For the crankbaits, he prefers a Kopper’s Live Target Crawfish Crank in the shallow model. The lure is designed to run five to six feet, and he chooses a 7’2″ medium-heavy moderate action St. Croix Legend Extreme rod matched with a 6.4:1 Lew’s Tournament Pro reel and 20-pound-test Gamma Edge Fluorocarbon, unles the cover is sparse, then he turns to the 16-pound-test Gamma Edge.

He chooses his crankbait colors based on water clarity, and he said he primarily uses three. For water with 18 inches or less visibility, he goes with the Chartreuse Brown color, if the water has up to two and a half to three feet of visibility, then the Green Tan color is his choice. In late winter through early spring, he will throw the Phantom Red color, because fish are aggressive on red that time of the year.

Retrieves
Again, because he is dealing with two distinct environmental situations in the fall, he uses an extremely slow approach with the jig, but moves faster in the afternoon sun with the crankbait. 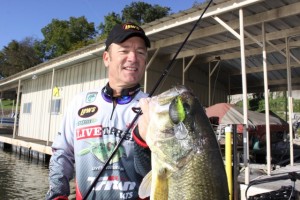 “I move the jig very slowly and keep it in contact with the bottom, I actually fish it much like I would a Carolina Rig, sweeping it to the side and pausing,” he said. “Sometimes, I even keep the rod in one place and slowly scrape the jig across the bottom with my reel handles.”

For the crankbait, he said he keeps the bait moving steadily. “I prefer to keep it moving and let the cover make the bait pause,” he said. “Hitting the cover is key, and when I deflect off of the cover is when I usually get a strike.

“Either way, this is kind of my own fall rut type of a fishing program, it works for me, and I bet if other anglers look outside of their own comfort zones, they probably will find results too.”