Tour Pit Crews – Keeping Them Up and Running 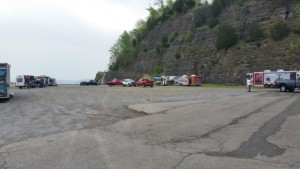 The Bassmaster Elite Series is at Lake Guntersville this week, and the FLW Tour was at Smith Lake in Alabama a little more than 10 days ago. While many of us have the perspective of fishing tournaments in areas near our homes, we may not fully understand how everything runs on the tour level.

When we fish a local event, we may take a few days out of our schedules to practice. We may be at the venue for several days, on the water for eight to ten hours a day, and aside from a few other anglers, we are probably the only people associated with an event in town. The organization running the event likely arrive a day or so before the event to set up.

What is different about the tour angler and the everyday tournament angler is that they are quite literally fishing for their livelihoods, and there is a group of people who arrive to make sure that the anglers can perform their tasks. The service crews in the boat yard arrive around the same time as the anglers, and they are prepared to support them in case of breakdown, adjustment or accident.

Being around the events in a support position for several years, I’ve been able to personally witness and experience how they support their companies’ investments on the water.

Why?
Each of the companies that provide anglers with monetary compensation and products to compete with are making an investment in not only the anglers, but also in their marketing. To have an angler, or a team of anglers, on the water showing what their products are capable of can produce a windfall should their angler win using it.

The adverse can happen as well. If an angler suffers breakdowns routinely, then it can mean bad publicity further than the good news about success. A technician can quickly asses and repair problems that can help their 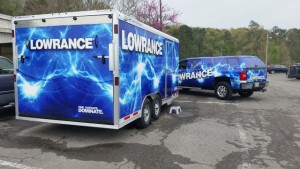 anglers perform better, or get back on the water quickly, should the unwanted problem occur.

The service crews typically arrive the day before practice starts so they can be ready for the anglers throughout practice, and they stay until the final weigh-in on Sunday, ready to lend their expertise.

What Companies are there?
Most of the major manufacturers have trailers fully stocked to support their crews. At an Elite Series event, there will be trailers from Skeeter, Triton, Ranger, and Bass Cat boat companies. Yamaha, Mercury and Evinrude all have trailers on site. Along with those companies, Lowrance, Humminbird, Garmin, Power-Pole, T-H Marine Rigid Industries and even Livingston Lures have people at the service yard to help their team members.

FLW Tour events feature some of the same companies. Their sponsors get to gather in one area, while the other companies are nearby as well.

What do they do?
If there aren’t any breakdowns, the individual crew members will spend time organizing their trailers, working on emails with the home office and ordering parts that may have been used at previous events so that they are in stock when they need them. 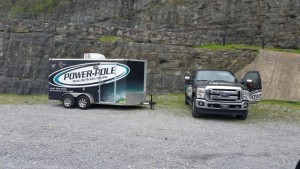 The outboard engine technicians actually spend parts of their days installing the electronic components on engine blocks. That way, they are ready just in case one of their anglers has a catastrophic failure, they can get the angler up and running and back in the competition. In the case of an engine block failure, the goal of the mechanics is to get a new powerhead on the boat and get the angler back fishing in as little time as possible. In many cases, they can accomplish that task in around an hour from the moment the boat is backed up in front of their trailer.

Of course they change lower units and propellers that have been impacted, and some additional rigging of products on the boat. Technicians can be found rigging electronics, installing lights, fixing trailers and adjusting things as well.

Examples of Service
I have personally witnessed the lengths that crews will go through to take care of the anglers. I’ve seen them go out on the lake to repair something on an angler’s boat, and I’ve also seen the techs in the yard run to help when one of their colleagues needs a second pair of hands.

I’ve had a couple of opportunities to experience their level of expertise first hand myself over the past few years. The first year that the Bassmaster Elite Series went to the California Delta, I was there as a camera boat and helping the communications department as well.

While I was there, my boat began to have difficulty turning over for some reason. Because I was a part of getting the Bassmasters show on the air, and helping other local media photographers and videographers get their shots, David Ashcraft, a Yamaha technician took the time to check out my engine and made sure that everything was working properly. 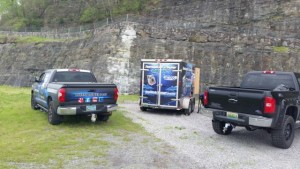 The next year they went to the Delta, I actually had a starter go down, and while he wasn’t able to fix it immediately because of my engine being older, he ordered the part and fixed it for me prior to the Clear Lake event the next week.

I borrowed a boat for the final three days of the event to host The Bass Zone crew on the water, but was in my own boat for the next event. I paid for the parts and repair work through Yamaha, but the fact is, my boat was ready for me to use at a time when most dealers and service centers would not have been able to get to my boat for quite a while.

Finally, in preparing to install a new Lowrance fishing system on my boat now, I was able to contact Lowrance’s tour support person Cheryl Spencer here at Guntersville, and have her coach me through the best way to set up my two HDS9 Gen2 Touch units and the network on my boat. Spencer took the time to make sure I understood how to rig it, and even drew a diagram for me to follow when setting everything up.

Wrapping Up
Like a NASCAR pit crew, these technicians are among the most skilled and knowledgeable individuals in their field. They make sure that the investments their companies make on their athletes is well cared for. When weigh-in is over, there are many days that the yard is full of anglers looking for everything from major repairs to minor adjustments.

Without these unselfish people, some of these anglers would not be able to compete; they keep them up and running