7/20/2011 – by Jim Hardy – photos by Dan O’Sullivan
Advanced Angler.com spoke to Jim Hardy, a resident of Slapout, Ala.; literally on the shores of Lake Jordan, and a Bassmaster Opens and Weekend Series angler to find out what the current conditions are on the lake and how it might compare to what the conditions were during last year’s Toyota Tundra Bassmaster Postseason. 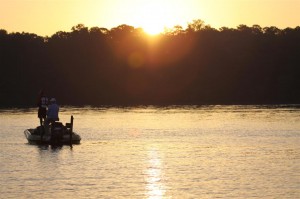 From talking to Hardy things sound like they might be different and quite interesting heading into the weekend.

Here’s what Hardy had to say.

In the first of two stops for all star week, Lake Jordan will provide anglers with many options of what to do and where to go. In the recent weeks, Lake Jordan has received late afternoon rains almost every day and this week has been no different. While writing this article our area got over five inches on the lower end of the lake and the weatherman says there is more to come.
With these rains it not only brings fresh water to the backs of the pockets but, also brings more predictable main lake current.

Lake Jordan itself is the last in the Coosa River chain of lakes and the anglers should receive benefit from its position in the chain this week. With all of the rain fall in the regions and the lakes above Jordan, this means that Alabama Power will be running current and every angler worth his weight in bass knows when the current moves; so do the fish.

What does this mean for the anglers? This means anglers will be able to catch fish a lot of ways this year. Last year, it was shaky heads, dropshot rigs and dragging football jigs for most of the day, then chunking big crankbaits for the brief run of current in the afternoon. Anglers will likely be able to do all of that and more fishing for spotted bass on main lake points, humps and docks, as well as upriver. Basically, things will likely be just like in the past few years here but even more so this year because of extra current.

One lure that could play a surprise role at Lake Jordan this year could be a swimbait. It wouldn’t surprise me at all to see swimbaits come into play this year. The first reason is because of the conditions, but also because of anglers like Skeet Reese, Davy Hite, and Steve Kennedy in this field this year. Kennedy and Hite both won tournaments on the Elite Series season with them and Reese did last year as well. I think that they will play a factor because in my experience Lake Jordan spotted eat them. So, don’t be surprised if a swimbait swims its way into the leader’s bag of tricks. 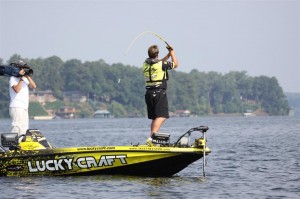 But, I wouldn’t count out the anglers who love largemouth, because they will have a chance to catch some nice fish this week too. Lost in the tournament notes of last year’s event on Lake Jordan was that Greg Hackney caught some quality largemouth here and had a chance to win. So look for largemouth to play a little in this tournament with flipping becoming a big factor in the outcome. Another technique lure to look for is a topwater. Spotted bass love choking big surface plugs this time of year and with the extra current they will be feeding heavy, so getting one or two quality fish on a topwater bait could make a huge difference.

With good water to be found in many parts of the lake look for anglers to cover a lot of water and as the current beings to roll look for the total weights to climb. It wouldn’t surprise me at all to see a two day total of around 30 pounds being the top eight cut line.

Local anglers already know that Lake Jordan is the one of the greatest spotted bass lakes in the world; with four pound spots being common around here and five pounders not far behind in total numbers. Team that with the Coosa River spotted bass living in current their whole life this makes them the hardest fighting fish in freshwater. It’s no wonder in a recent Bassmaster University class Kevin VanDam said in front of a large crowd; “You can take a three pound Coosa River spotted bass and tie him to a three pound smallmouth and a three pound largemouth and the spot will drown both of them with no trouble.” 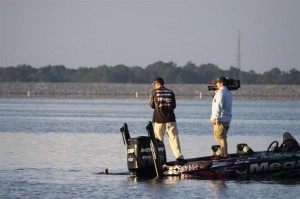 Anglers to look for in this tournament – Kevin Van Dam and Aaron Martens because of their recent success here and good knowledge of spotted bass. But don’t count out Gerald Swindle and Mike Iaconelli who both did very well the last time they were here. Lastly everybody wants to know who the dark horse guy they won’t see coming? It’s hard to pin it down with these guys since they’re all stars but my dark horse look for Kennedy to turn some heads because he grew up in this area and has fished Lake Jordan and the other lakes within an hour from here his whole life.

For those of you wondering when most of the catches will happen. The current generation schedule says current will be running 11am to 7pm all week and this could change due to more or less rain. But if this stays as predicted, it could make a huge difference over last year’s tournament when the current only ran a total of two hours each day from around 1:00 to 3:00 PM.

With the amount of damage that these guys did last year on the lake with only two hours of current; Lake Jordan’s spotted bass might be in trouble because when you only give the best in the world a couple hours of current to capitalize on it and they did that pretty well. But, when you give these all stars five hours of current with which to put a plan together, I think a VanDam quote says it best; “Lights Out.”

Editor’s Note: Jim Hardy is a Bassmaster Opens pro and Bassmaster Weekend Series angler, who lives on the shores of Lake Jordan. Hardy is a dedicated outdoorsman who loves hunting and especially fishing for Lake Jordan spotted bass. He is also passionate about sharing the outdoors with less fortunate youngsters. As a paraplegic outdoorsman, Hardy has dedicated himself to teaching youngsters with disabilities that the outdoors is for them too. His foundation; Outdoor Friends Forever is active in that pursuit. 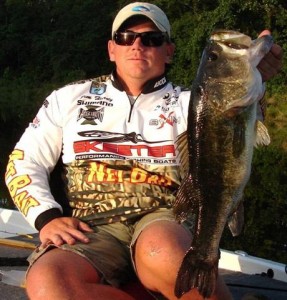 Along with his many altruistic activities, Hardy is a also an active pro staffer for several industry companies; including, Davis Bait Company Costa Del Mar, Shimano, GLoomis and NetBait with whom he designed a signature bait called the Hardytack Craw and a signature color called Hardy Craw.

Find out about Outdoor Friends Forever on their facebook page