Rewind
The 2008 Bassmaster Classic would mark the first return of the event to the East Coast since the 1999 Classic; which was held in North Carolina.  In 2008, the weigh-ins and Expo would be held in Greenville, S.C. while the event itself would be contested on the waters of Lake Hartwell.

Hartwell, like many other lakes in the region, had become known for its population of blue herring; which had become the predominant baitfish, causing the bass population to become largely nomadic, especially on the main lake.  Up the rivers, the largemouth tend to operate much more like river largemouth, hiding around cover and whatever docks were in the water.

In the period preceding the 2008 Bassmaster Classic, the Southwest was in the middle of a significant drought, and that left the water levels at Lake Hartwell as much as 20 feet low.  The low water levels would mean that very little shoreline cover would be in the water.  The event would also be one of the first extremely cold Bassmaster Classics.  In fact at the time, two of the competition days became some of the coldest in Bassmaster Classic history.

Battling the extreme conditions, and the early charge of the field with some heavy day one weights, Waco Tex. pro Alton Jones would prove to be the most consistent angler over the three days, and he would prove victorious in his 11th trip to the Bassmaster Classic.  In his 10 previous trips to The Classic, his highest finish had been a pair of seventh place finishes; but having won four Bassmaster Tour events, he had proven he could win.

Jones credited two techniques for producing keepers in the event, but said that one of them was responsible for every fish that came across the scales at Greenville’s then Bi-Lo Center stage.  The lure he used to locate the schools of fish was a Cotton Cordell CC Spoon, which he vertically jigged, and the others – a pair of 1/2-ounce jigs – were prototypes of the Booyah Baits Pigskin and A-Jig tipped with YUM soft plastic trailers.

The Winning Pattern
Jones said that he located the areas that he would eventually use in the tournament while riding along with a friend from the area during pre-practice.  He said that Glenn Fenley, a local angler who primarily chased striper, but also did some largemouth fishing drove him around the lake before Jones started scouting himself.  “Glenn kept driving by these spots in the low water and remarking about how they were some of his favorites,” he said.  “I noticed that all of the spots he showed me had trenches running through the clay banks, so I made a note of it.”

He said he found several areas that had the trenches, and when the official practice period began, he would begin looking at those.  On the first morning of the three day practice the week before the Classic, he went to his first area, made a drop with the CC Spoon, and caught a solid keeper right off the bat.  “That fish really clued me in to the right pattern and I could spend the rest of the three days dialing it in,” he said.  “It’s not very often that you can spend the whole practice period refining a pattern.”

He discovered that the fish would bite the spoon really well in only the first hour of the morning.  So, while he had a strong pattern he could duplicate around the lake, he could not get a bite otherwise.  He went out for the Official Practice Day on the Wednesday before the event still trying to put together a backup plan. 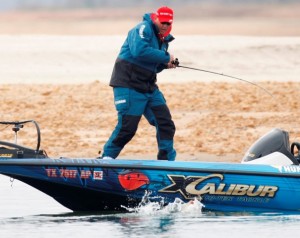 Alton Jones on the Water in the 2008 Bassmaster Classic – photo courtesy B.A.S.S.

His marshal for the day was a man named Chris Wells, who would later become the Chaplain to the anglers on tour.  Jones picked up a 1/2-ounce jig and made a long cast into deeper water near the base of the timber that filled the lake starting at the 35-foot level, and immediately got a bite.   He set the hook and boated a three and half pound largemouth.  He released the fish, made a second cast thinking it was a fluke and got another solid bite which he shook off.  he high-fived Wells and realized he had a backup pattern fishing the areas where his trenches intersected the timber.

After the practice was over, he hugged his wife Jimmie Sue and told he that he had waited his whole career to feel like had this strong a pattern heading into a Bassmaster Classic.  He would spend his free time playing through his strategy for the first morning of the event.

Day One
Jones had an early boat number, so he went to his first spot and began vertically spooning in the ditch.  In seven drops, he had landed a limit that was close to 13 pounds.  He also said he would have had the limit in five drops, but he lost two fish back to back.  Then, another competitor, Peter Thliveros, arrived, having found the area as well.  Jones said he felt like he had gotten the most out of the area he could, and left the area to Thliveros, going to other areas approximately a 1/2-mile away.

He picked up his jig and culled everything in his limit by 9:30AM.  He then left to try to expand his pattern and later culled again, bringing his weight to 17 pounds, 5 ounces, good enough to land him in 10th place.

Day Two
With a late boat number on the second day, Jones decided to  forgo his first spoon area and head straight to the second spot where he caught his jig fish.  He managed to catch 10 keepers that day; nine of them on his first spot.

With fewer bites coming, he said he started to wonder if the fish in his area were beginning to wear out.  “It’s something that you have to consider as a tournament goes on,” he said.  “When the bites are coming further between you have to start thinking about where you might go and what adjustments you have to make.”

Even with that concern, he  managed to bring 18 pounds, 11 ounces to the scales and take the lead after the second day with a total of 36 pounds.

Day Three
Jones said that he began to feel like the fish in his areas may have begun to feel the pressure of not only his angling, but also the amount of boats on the water.  “I had quite a few spectator boats on that final day,” he said.  “I think that may have had an effect on the fish, because the bites were event slower that day.”

He managed to catch only five keepers that day, but his 13 pounds, 7 ounces was enough to push his total weight to 49 pounds, 7 ounces,  His margin of victory of second place finisher Cliff Pace was 5 pounds, 2 ounces. 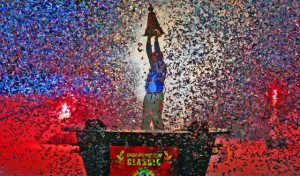 He said that the increased platform has given him more opportunities to share his faith; which he knows is part of the plan for his life now.  “I have no doubt that God had a reason for me to be that person at that time,” he said.  “I know that I have a responsibility to share my faith and my love for the sport with others, and that just made it all the more real with the increased platform.”

He said it took a while for the reality of the accomplishment to sink in, and while he had moments throughout the next year, the busy schedule of a Classic Champ gets in the way of reflection to a point.  “It was almost to the point where I realized that I was a Classic Champion in the 30 seconds before I handed the 2009 trophy to Skeet Reese,” he said.  “It was in that moment that I realized I was no longer the champion, but that I was a former Classic Champion.

“But, the truth is, that each of us who have won it will forever get the chance to say that we are Bassmaster Classic Champions.  When I look at the names before me on my trophy and the names that came after me, I realize what a great group I am a part of, and what a huge blessing it was and continues to be.”