The spotted bass has fully entrenched itself in the minds of Western Anglers as a “go to” species when targeting patterns for reliability during a day’s outing or preparing for a tournament. Spotted bass have developed a reputation for being more compliant, less resistant to weather changes that push finicky Florida Strain largemouth or smallmouth bass into a negative mood. 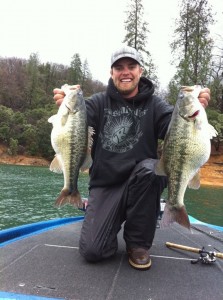 Most bass anglers can recall catching plenty of spotted bass in the two to three pound range, however, most of those same anglers would be able to count the amount of four to five pound spots they’ve caught on one hand. What about trophy spotted bass? Most anglers, if they responded with total honesty would tell you that finding a six to eight pound spot often feels like probing the dark waters of Loch Ness in Scotland searching for the infamous “Nessie,” and in a tournament the search can feel similarly unproductive.

For anglers who venture to the Redding, California area, that futility is no longer the case; in fact catching big spotted bass At Shasta Lake has become quite a regular event, even in competition. Anglers have become so proficient at finding big spotted bass that the largemouth bass population at Shasta has all but been forgotten.

One of the biggest problems angers make when targeting big spots that they default to lures that don’t appeal to larger fish. Eighty percent of the fish in any lake are fish that are smaller than two pounds, and will not help with the overall weight of the bag if winning a tournament is the overall goal.

An aggressive spotted bass angler starts each day with a go for broke approach. You have to remain flexible and learn to follow the fish because big spots can act similarly to striped bass. The suggestion with these fish is to try to be very aggressive from the beginning; don’t start out just trying to get a limit. Spotted bass are hostile predators, and they attack with ferocity, so employing reaction methods often triggers that response.

An example of that approach is that anglers can often do really well on January days throwing spinnerbaits at Lake Shasta in snow storms. Spotted bass get stirred up by the weather and can often feed excitedly when the wind blows; regardless of the water temperature.

It pays to find the thermocline with fishfinders, especially in cold weather, but mainly as a fall back. Finding the thermocline helps and angler figure out where the activity levels will be on the lake that day. But that doesn’t mean you won’t find a shallow bite. Especially with spotted bass, start shallow and cover some water before deciding if you need to fish deeper water. Cold early mornings are all about swimbaits for big western spotted bass these days, tossing swimbaits as big as eight inches is a great way to look for big bites.

But, while you are looking for the big late winter swimbait fish, it makes sense to keep some backup programs at the ready. A heavy football jig with a twin tailed trailer and a shaky head or darter head rigged with a six to seven-inch worm are great to have ready for just the right opportunity.

When you go through an area with a swimbait, keep your eyes peeled followers or missed strikes. A lot of times, the swimbait will call fish, but they don’t connect; that’s when you can pick up the jig and quickly work it through the area. If those fish don’t respond to the jig, then go to the worm, a work it more slowly. 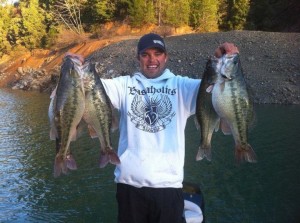 Keeping in mind the aggressive nature of spotted bass, it’s best to make quick hits of an area without staying in one place too long. By doing that, you can quickly cover enough water to decide if the shallow bite is worth committing to. If that approach proves unsuccessful you still have more than enough time to locate deeper schools of fish and target them with the jig, the darterhead or a dropshot rig.

Try to think of them as a different animal to the object oriented largemouth bass and be willing to keep moving. Spotted bass will often suspend over a point in 100 feet of water, but remain shallow enough to reach with a jerkbait or crankbait. Those kinds of fish can be caught me making them strike more out of aggression rather than a feeding mode. By moving faster than the worm dragger and using larger than average lures, anglers can realize they have a penchant for catching big spotted bass.