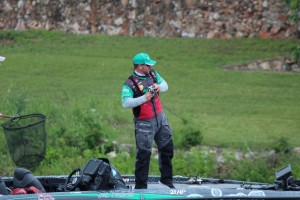 There are a few times of the year that bass are in a predictable state.  The period surrounding the spawn, the mid-summer offshore patterns and the fall feed are a few of those times.  Then, there are the times when chaos is the constant.  Postspawn and the late summer to fall transitions can be those times.

Fred Roumbanis, the three tour pro from Bixby, Okla. likes to try and give himself the best chance at delivering consistently during those periods, and one of the ways he does that is to rely on a football jig.  “A football jig gives me the ability to catch bass in a variety of ways that other lures can’t,” said Roumbanis.  “With crankbaits, jerkbaits spinnerbaits, the lure must be moving to be effective.  But, I can fish a football jig on the bottom, stationary, or by moving it through the water column; it truly is my most versatile lure.”

Sure, Roumbanis uses all of the other lures when the time is right, but he said that the football jig is not as reliant on environmental conditions for triggering a strike.  “We get on certain bodies of water around the country that are at their best when current is moving,” he said.  “Lakes like those on the TVA Chain can be excellent when they are pulling water to generate power, but when that current stops, so does the bite; a football jig helps me catch them anyway.”

Here is how Roumbanis uses the football jig to his advantage. 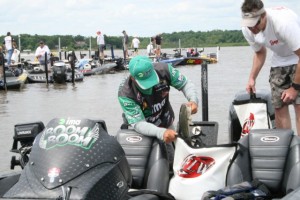 Roumbanis prefers to use tackle that allows him to make long casts and cover the water with efficiency.  “I like a long rod that allows me to make long casts and pickup a lot of line on a hookset; it also gives me leverage during a fight,” he said.  “I want a fast reel so that I can collect line quickly if a fish comes straight at me, or when I’m retrieving the bait for the next cast.  I also choose line that allows for good strength, but doesn’t inhibit the action.”

With those considerations in mind, Roumbanis opts for his signature 7’5″ iRod Fred’s Magic Stick, an Ardent Edge Elite reel with 7.2:1 retrieve speed and 15-pound-test  PLine 100% Fluorocarbon line.  “I’ve tried it with all different lines and that gives me the best combination of strength action and sink rate,” he said.

He chooses his jig size based on the type of fishing he is doing.  He selects them by speed.  “If I am fishing slow or shallow, then I go with a 1/2-ounce Pepper Jigs Football Jig,” he said.  “For faster retrieves or deeper water then 3/4 to 1-ounce so that it stays in contact with the bottom or falls faster.”

Jig Trailers
The Oklahoma pro chooses his jig trailers based on how he plans to fish the lure, and what types of forage he is intending to mimic.  For bluegill or shad type presentations, he tends to use a Optimum Lures Double diamond swimbait.  For crawling over deep cover or swimming along the bottom at any depth, he chooses a twin tailed grub for stealthy presentations, or an El Grande Lures El Sapo frog if the fish require a bulkier bait or wilder action. 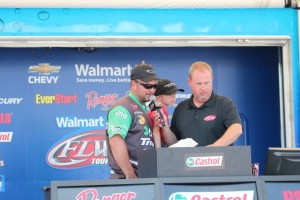 Colors
This is one area that Roumbanis said he thinks anglers should experiment more.  “So many anglers view this as a crawdad imitator; and it is so much more,” he said.  “I tend to try and make it look like a bluegill a lot, and when fish are chasing shad, I’ll use shad colors a bunch too.  Getting stuck in a rut of only using brown and purple, watermelon or green pumpkin shades can limit the amount of bites they can get.”

Where and How to Fish the Football Jig
Roumbanis said that he likes to use a football jig just about anywhere.  “I’ve caught fish on football jigs from really shallow to really deep,” he said.  “I’ve fished them on points, flats, ledges, creeks and humps; it’s really one of the most versatile lures I have in my boat.”

How he fishes them depends on where he is.  In shallow water, he tends to try an mimic a bluegill that is feeding near the first rolling break off the shallow flats.  In this instances he scurries the jig along the bottom fairly quickly, hops it and lets it fall to the bottom and rock forward, making it look like a feeding bluegill.

In deeper water; especially off ledges, he fishes quickly when fish are on the ledge feeding, but maintains bottom contact.  If the bite slows because of a lot of fish being taken out of the school, or because the current has slowed, he begins to wildly yo-yo the lure, allowing to fall on a slack line after snapping it up four or five feet of the bottom.

If he is fishing specific structure, such as points or offshore humps, then he carefully works the lure through every little piece of additional cover on the main structural element.  If it is brush, he wants to crawl it through the limbs, or scratch it over every piece of rock on the bottom. 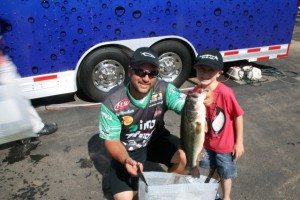 Roumbanis said he targets his search by looking at his Lowrance HDS Fishing Systems and identifying the depth zone that baitfish and bass are relating to.  “I start looking at this as I leave the takeoff,” he said.  “I’ll see a line on my Lowrance that looks like interference at a certain depth. That is the plankton that are hovering around the most comfortable section of the water; that will bring baitfish, and the bass will likely be there as well.”

The Incredible Versatile Jig
While many anglers carry several boxes of different jig styles in their boats, Roumbanis said that the football jig gives him flexibility to not have to carry so many different styles.  “It really is my most versatile lure,” he said.  “I can swim it, hop it, yo-yo it and even use it as a light Flippin’ jig if I need to.

“I use it a lot, and if I could give anglers one bit f advice, it would be to tie it on and throw it; they’ll catch fish in places that they never thought they could use a jig and be effective; just try it.”