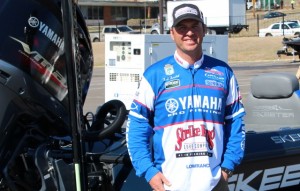 Orange, Tex – Gopher Industrial and Elite Series veteran professional angler Todd Faircloth have joined forces for 2015. Gopher Industrial’s David Jones said, “Gopher Industrial is an Orange, Texas based company with a large number of customers that enjoy fishing and the outdoor sportsman culture. Pairing up with a local great Todd Faircloth, from nearby Jasper, Texas makes excellent sense. Todd’s a hard working family man like our customers and we are proud to have him representing our company.”

“Gopher Industrial is the type of company I like to partner up with because of their core values and community involvement.” Faircloth said. “They go beyond just industrial products and solutions by giving back to the youth and offering programs to help them catch their dreams. I’m glad to be on board with them.”

Faircloth, a family man, will be cheered on during the 2015 Bassmaster Elite series season by his wife, Angie and their children, Hudson, Harrison and Helen Claire. David Jones said, “What Todd has done over the course of his career is beyond impressive. We did the research and in his 182 tournaments he has won four times, finished second in six events, and third three times. Faircloth has finished in the top 50 in 132 total events or 72% of the time. He’s also finished in the top ten in the Elite Series Angler of the Year race the past three seasons.”

Gopher Industrial is a solution provider for industrial equipment offering everything from hose and pipe to welding equipment and safety supplies. Faircloth said, “Gopher is run by great people who love the sport of fishing. Along with their day jobs of offering quality industrial equipment, they also play a major role in the Orange, Texas (Sabine River) Elite Series events. The Sabine River event in 2013 was an outstanding success and I know it will be even bigger and better in 2015.”

The opening event of the 2015 Elite Series will be the Bassmaster Classic and will take place at Lake Hartwell in Greenville, South Carolina February 20-22. The Elite Series kicks off with the Greater Orange Chamber of Commerce sponsored event on the Sabine River March 19-22 in Gopher Industrial’s hometown of Orange, Texas. The Elite Series will continue throughout the spring and summer and eventually culminate in the fall at the Toyota Bassmaster Angler of the Year Championship tournament, with the date and location still to be announced.